In 12 songs recorded around his Holly Springs home, Burnside raises the spirits of his father, R.L. Burnside, and other blues giants 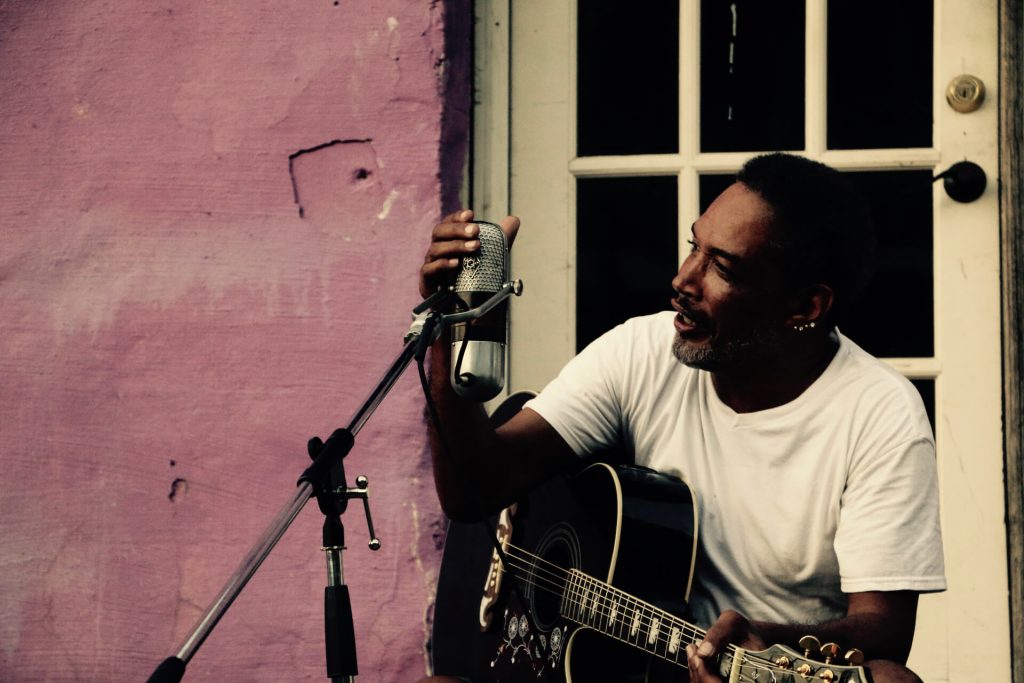 The music of Duwayne Burnside is primal as an alligator’s backbone—as raw, earthy, and fertile as the kudzu-covered terrain of the North Mississippi hills, where his family has defined the sound of the region’s blues for more than a half-century. And Duwayne’s new album for Dolceola Records, Acoustic Burnside, was recorded on the very soil where the Burnsides have planted their deep musical roots, and brims with unvarnished authenticity and character.

When Duwayne—the son of legendary bluesman R.L. Burnside—sings and plays his guitar in Acoustic Burnside’s 12 songs, it’s as much an act of wizardry as musicianship. His cresting and falling voice—full of honey and cotton-patch dust—and the ringing, chopping, driving tones of his acoustic six-string part the clouds of time, transporting those lucky enough to hear him to a day when the blues were young and life was so uncluttered that the sound of an unamplified guitar could travel for miles over the hills, enticing neighbors for a night of moonshine-soaked revelry.

I learned most of the songs on this record from my daddy, so when I play them, I’m doing my best to show respect and love for him and the music. When I play on acoustic guitar, especially, it goes back even further, because this music started without electricity.

I think about all the musicians who came up from the early days, out of the Delta and the hills, and took their music to the big cities and all around the world. It makes me feel like I’m a part of all that history.

That history comes to life in these performances, recorded around Duwayne’s home in Holly Springs, Mississippi, in June 2018 and September 2019. On “Poor Black Mattie”—the anthem of the Magnolia State’s hill country blues—he captures the style’s swinging rhythmic intensity and keening vocals. It’s an approach defined by Mississippi Fred McDowell and refined by McDowell’s premier torchbearer R.L. Burnside, designed to cut through the noisy revelry of a crowded juke joint and keep patrons dancing.

Besides performing his father’s songs, including “Jumper on the Line,” “Going Down South,” and “Alice Mae” (written by R.L. for Duwayne’s mother) on Acoustic Burnside, Duwayne pays homage to another mentor and lion of hill country blues, his late neighbor Junior Kimbrough. “Junior was like a second father to me,” Duwayne says, “and us Burnside and Kimbrough kids all grew up together, playing games and making music, so it’s like we’re all one big family.”

Duwayne turns Kimbrough’s “Lord Have Mercy on Me” into a folk-funk masterpiece, evoking both the song’s author and his own earliest recordings as part of his father’s electric groove band the Sound Machine, in 1980, when he was barely in his teens. And Duwayne’s rendition of the classic “Dust My Broom” embodies the musical lineage this album’s performances represent. His undulating vocal line and hard-stoked guitar reflect the influence of R.L. while also drawing on the song’s earlier immortal performances by Elmore James, who influenced the elder Burnside, and its originator Robert Johnson.

The web of family, historical, and musical legacy that runs through Acoustic Burnside is intentional, explains Dolceola Records founder Dan Torigoe. “We’re a music label focused on analog field recording of American traditional music, with love and adoration for the great field recorders,” he explains. “I love R.L.’s first recordings made in 1968 by George Mitchell and wanted to make a sort of modern version of it with the current generation. So, while Duwayne is renowned for his solid electric guitar playing with influences from modern blues, the musical tradition of his father and his community is rooted very deep in his body and soul, and we wanted to capture that in a more primitive way.”

Indeed, Duwayne Burnside is best known for his decades lighting festivals and clubs around the world afire with his electric guitar in a style that straddles the influences of R.L. Burnside, B.B. King, and Jimi Hendrix—either leading his own bands or sharing the stage with other members of the Burnside and Kimbrough families, including his brother Garry Burnside and his Grammy-winning nephew Cedric Burnside, as well as Junior Kimbrough’s sons Kinny and Robert. In 2003 and 2004, he was a member of the North Mississippi All Stars and he appeared on that band’s albums Polaris, Tate County Hill Country Blues and Hill Country Revue—Live at Bonnaroo.

Duwayne has been immersed in music since birth, as the sound of his father and friends’ playing regularly filled the Burnside household. At 12, he began to play drums, occasionally supporting R.L. and performing in the bands at Junior Kimbrough’s juke joint in the fields outside of Holly Springs. By age 14, he’d switched to guitar and became a member of his father’s band just in time for the recording of Sound Machine Groove. At 15, he moved to Memphis to make his own way in the dynamic and vital blues scene that sprawls from the Bluff City to Mississippi’s hills and Delta. He ricocheted between Memphis and the Holly Springs area in subsequent decades, settling in his hometown once again in the early 2000s. Duwayne has also supplemented his career as a guitarist, singer, and bassist by operating a series of juke joints in Memphis, Chulahoma, and Holly Springs. Just this spring he opened the latest: the Burnside Bar and Grill at 645 North Highway 7 in Holly Springs.

Although Duwayne’s been highly in-demand as a player since he started to shave, he did not make an album under his own name until 1998. For that release, the high-spirited Live At the Mint, he fronted his own band, called Mississippi Mafia. His only other recording as a leader, Under Pressure, followed in 2005. With interest in North Mississippi hill country music at a new high, expect to hear from him more often following the arrival of Acoustic Burnside.