“Anytime I play live, I just want to make people forget about everything else in the world and feel the same joy that I feel on stage.” 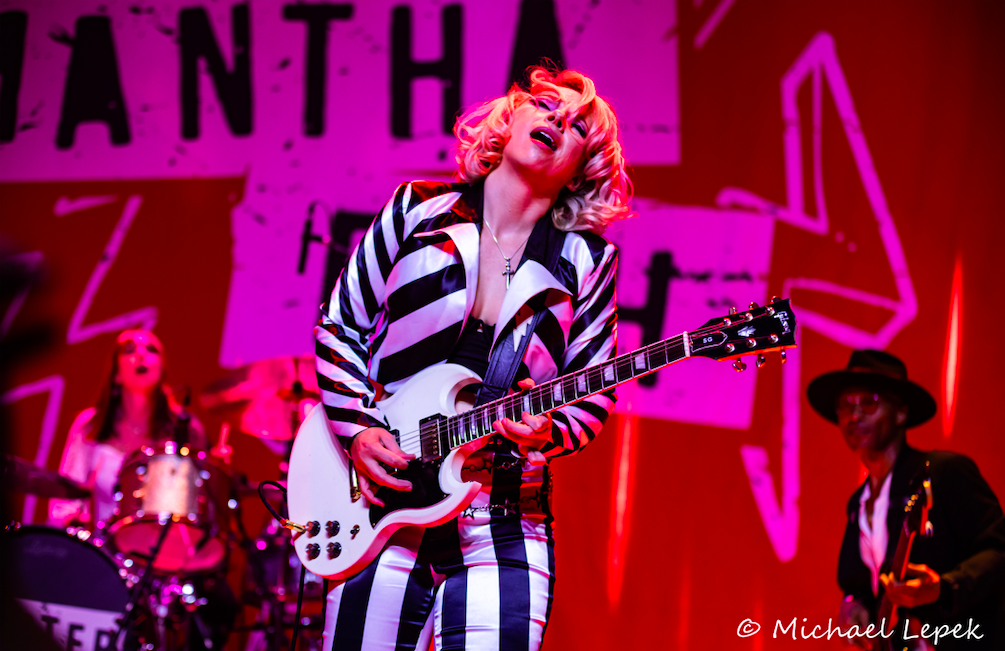 There is no denying that singer, songwriter, and guitar-slinger Samantha Fish has a rabid fan following. For starters, there’s a whole slew of Facebook groups solely devoted to chronicling her every move. This includes “Samantha Fish Fridays,” which features a gallery of pictures showing this photogenic powerhouse in action.

So, it was surprising to find that seats were still available when she made a stop in the Chicago area to play the Des Plaines Historic Theatre on Thursday, June 23rd. After all, Fish has wowed crowds at major festivals and blues cruises, and has played alongside big names ranging from Gary Clark Junior and Devon Allman to Tab Benoit, Buddy Guy, Cedric Burnside, and a host of others.

Although Fish has collaborated with today’s most influential blues artists, she cannot be pigeonholed to one genre. Her versatility and willingness to stretch all musical boundaries were on full display in Des Plaines, Illinois where she played everything from Barbara Lewis and Neil Young covers to self-penned tunes from her new pop-inflected album Faster (ABS review/interview). From start to finish, it was a superlative show, and it was a treat to catch Fish in a smaller venue.

Dressed in a black and white striped ensemble, she sauntered on stage with a cigar box guitar slung around her neck and tore into an incendiary version of “Bulletproof” from her 2019 release, Kill or Be Kind. She switched out guitars for “All Ice, No Whiskey” and “Twisted Ambition” from Faster.

On the next tune, Fish gave a shout out to Barbara Lewis, as she segued into chanteuse mode with “Hello, Stranger” from her 2017 Chills and Fever. Fish then kicked it into overdrive with “The Highway’s Holding Me Now” from her 2015 Wild Heart release.

She dug back into her new album with a mesmerizing live version of her “Hypnotic” which was followed by the always rhythmic “No Angels” and the country-blues flavored “Gone for Good” – both from Belle of the West. Fish already has seven albums under her belt.

Many of the attendees have caught Fish many times including Brian Bullock, who hails from the Chicago area, He said, “I love Sam. This was my 13th show including ‘Fest sets.’ I first saw her at (New Orleans) Jazz Fest on the Blues stage. I’m guessing 2016. My first full show was 2017 at the Brauerhaus in Lombard. I’ve seen her all over the place now.”

Bullock added that he “thought the Des Plaines show was fantastic, but I think she was surprised by the seats-only set up and seemed to call an audible with the acoustic set in the middle.”

The acoustic set that Bullock referenced included “Need You More” and “Jim Lee Blues” before Fish’s full band came back on for a rousing rendition of Neil Young’s “Don’t Let It Bring You Down” which brought the house down. Bullock noted, “I loved that she had the whole room on their feet by the end of the show.” He added that he didn’t think seated venues suited her style as well but Fish “nailed it.”

It’s also obvious that Fish is hitting all the right notes with her backing band: drummer Sarah Tomek, Ron Johnson on bass, and keyboardist Matt Wade.

Bullock summed up the thoughts of show goers when he said, “I absolutely love her band right now, especially Sarah Tomek on drums. He added, “they really seem to drive her, and she has clearly stepped into the leader role.”

Fish and her band were firmly in command throughout the night as they finished off with “Bitch on the Run,” “So-Called Lover,” “Dream Girl” and “Black Wind Howling” before coming back on for an encore of Bukka White’s “Shake ‘em on Down,” which featured a sizzling harmonica solo from her guitar technician.

Fish has said, “I fell in love with music from going to shows, and I know how cathartic it can be.” She added that, “Anytime I play live, I just want to make people forget about everything else in the world and feel the same joy that I feel on stage.” She did just that at Des Plaines Theatre.