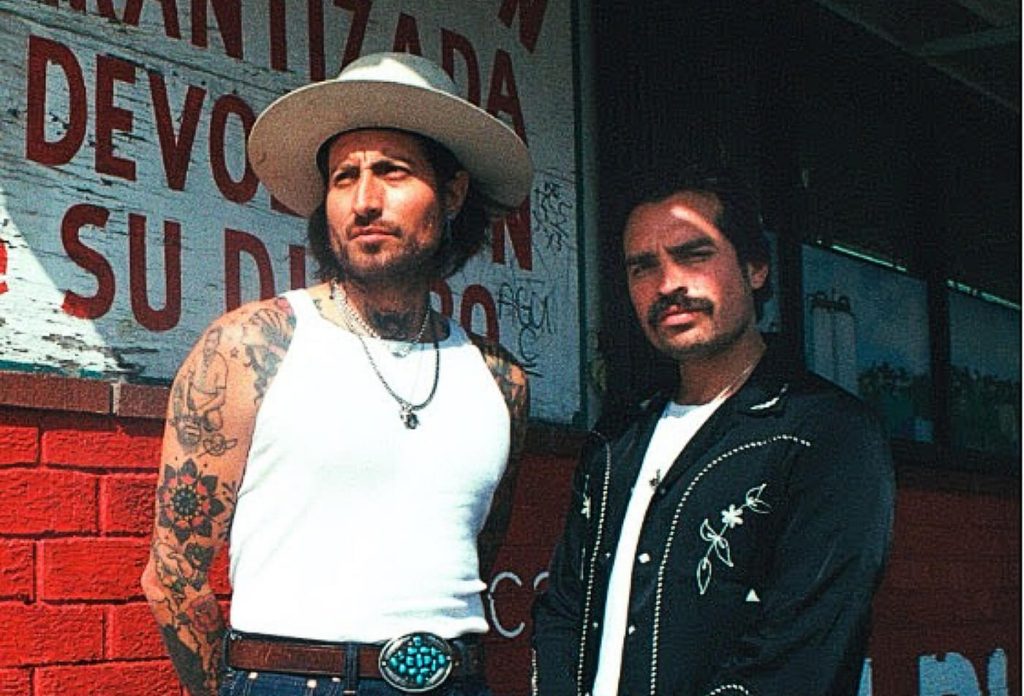 Zurich-based duo Hermanos Gutiérrez, comprised of brothers Estevan and Alejandro Gutiérrez, are thrilled to unveil “Tres Hermanos,” the newest song from their forthcoming new album. Recorded in Nashville, the song marks the first outside collaboration the duo have released, featuring a performance from the “third brother” himself The Black Keys’ Dan Auerbach.

About the song Hermanos Gutiérrez said, “we wanted to reconnect with our Latin roots and share that feeling of hanging out with friends in a ‘Barrio’ somewhere in a city in Latin America. While recording this song in the studio, Dan suggested playing a specific melody over the bridge. We remember trying a few things, but it was not what he envisioned. We invited him to play on the song, and it was such a connecting moment between the three of us, creating this song together and talking through music with each other. Since it has always just been the two of us, we felt honored and grateful to have Dan playing with us on this song.”

Entitled El Bueno Y El Malo, the new record from the brothers is set for release on October 28, 2022 via Easy Eye Sound, Auerbach’s acclaimed label he founded and runs.

“Tres Hermanos” release follows the band’s sold out shows at New York’s Bowery Ballroom, LA’s the Hollywood Forever Masonic Lodge, and their set at Newport Folk Festival. The duo will also be opening for Jason Isbell in Nashville at the legendary Ryman in October.

“When Alejandro and I play together, it’s like we are driving a car,” says Estevan Gutiérrez. “It’s like we are taking a road trip. Sometimes we’re driving through a desert. Sometimes we’re traveling up the coast. But always we are in nature, and we see the most beautiful landscapes, sunrises, sunsets.” The music these two brothers make evokes expansive plains and rough wildernesses, saguaros and surfs, spaghetti westerns and Morricone soundtracks, Lynch and Jarmusch. With their guitars they travel through landscapes haunted by vaqueros, cancioneros, wanderers, fugitives, lovers, family—and whatever ghosts their listeners bring to the music.

El Bueno Y El Malo is their most epic journey yet: working with Dan Auerbach at his Easy Eye Sound studio in Nashville, they’ve crafted ten vivid compositions that highlight their intimate guitar playing, where one brother’s rhythms and the other brother’s melodies twine around each other so that they become inextricable. Together, they generate what Estevan calls a “deeper, darker energy” defined by complex arrangements, sophisticated playing, and most of all their very close relationship.

Started a few years earlier, Hermanos Gutiérrez began releasing music on their own, all of which gained traction in 2020. “My brother and I,” says Estevan, “we did everything by ourselves— all the music, even the artwork. But during Covid, our music was streamed all over the world,” especially their 2020 album, Hijos del Sol. Perhaps because people were looking for an escape from their worries or were traveling to new landscapes without leaving their homes, the music of Hermanos Gutiérrez spread by word of mouth, eventually finding its way to Auerbach. After a twenty-minute conversation, they signed with Auerbach’s Easy Eye Sound record label and started writing songs for their forthcoming album.

Setting up shop a few months later at Easy Eye Sound studio, El Bueno Y El Malo was recorded quickly and organically, despite it being the first time they’d ever met Auerbach in-person. They worked on the fly, hewing closely to the songs they had brought over from Switzerland while remaining open to any and all new ideas. El Bueno Y El Malo gently expands their sound, retaining the foundation while adding drums, castanets, strings, and congas. The additions are more than subtle; they’re subliminal. They focus the attention on the two main figures and the intricate, almost telepathic interplay of their instruments. In perhaps the most significant addition to their two-guitar sound, their producer even played on one song. As the brothers struggled with an arrangement, Auerbach suggested an idea for a melody, even plugging in and playing it for them. They loved it so much they invited him to record it with them, even retitling that song, “Tres Hermanos.”

The title of the album is, of course, a reference to Sergio Leone’s legendary 1966 spaghetti western The Good, the Bad, and the Ugly and especially its score by Ennio Morricone. But the phrase has a deeper meaning: “We think that everybody has a good side and a bad side,” says Estevan. “It’s every person, every moment, every situation. Everybody has these two faces.” It’s not a cynical idea, but one that celebrates the depths and dualities of humanity, and music—even music that does not include vocals or lyrics—is the perfect vehicle to explore such big ideas.