Big Bad Voodoo Daddy: a 1940s jukebox explosion for your eyes and ears. 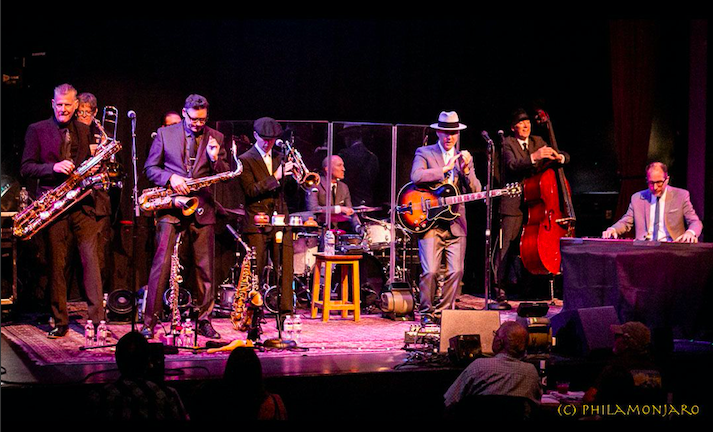 Smartly dressed hepcats in suits, fedoras, and flat-caps packed the stage. This nine-piece neo-swing band owned the room from start to finish. ABS caught them at Chicago’s Old Town School of Folk, Maurer Hall while touring this fall. The venue is a perfect setting as it has a 1930s WPA-funded art mural above the stage, and it is one of the best music rooms in the city. They boast great sightlines, sound system, acoustics, lights with enough open space for swing dancers to stomp the Lindy Hop through the night.

Dirk Shumaker held the red-hot rhythm with time for their own solos as well. Collectively they are a tight unit of showmen with a 30-year musical history together. And for fans, it’s a real blowout.

The two-hour concert featured both originals and renditions of classic hot jazz numbers. Their popular cuts “You and Me and the Bottle Makes Three,” “Go Daddy-O,” “Mr. Pinstripe Suit,”

and “King of Swing” played seamlessly with timeless Cab Calaway songs: “Minnie the Moocher” and “Jumpin’ Jack.” They melodically weave between swing, hot jazz, shuffle, Nawlin’, boogie-woogie, jump jazz, slinky blues and anything between – a 1940s jukebox explosion for your eyes and ears.

Big Bad Voodoo Daddy broke out at the forefront of the neo-swing scene in the mid-1990s along with Cherry Poppin’ Daddies, Royal Crown Review, Squirrel Nut Zipper, The Lucky Strikes and The Brian Setzer Orchestra. Since then they have played everywhere and sold millions of CDs.

Their widespread popularity was prompted in part by a couple of numbers featured in Jon Favreau’s 1996 Swingers movie soundtrack. Both (their charting single) “You & Me & The Bottle Makes 3 Tonight (Baby)” and “Go Daddy-O” were defining for the film, and prominently performed in the movie’s club scenes which included some skilled swing dancing. They really stylized the movie.

Big Bad Voodoo Daddy is worth seeing live. Be sure to catch them on tour.