Enjoying the Ride: The Backseat Lovers Play Their Brilliant New Album, ‘Waiting to Spill,’ to an Adoring Chicago Crowd

At their recent show in Chicago, where they played 'Waiting to Spill' in its entirety, The Backseat Lovers proved they are no mere studio darlings. 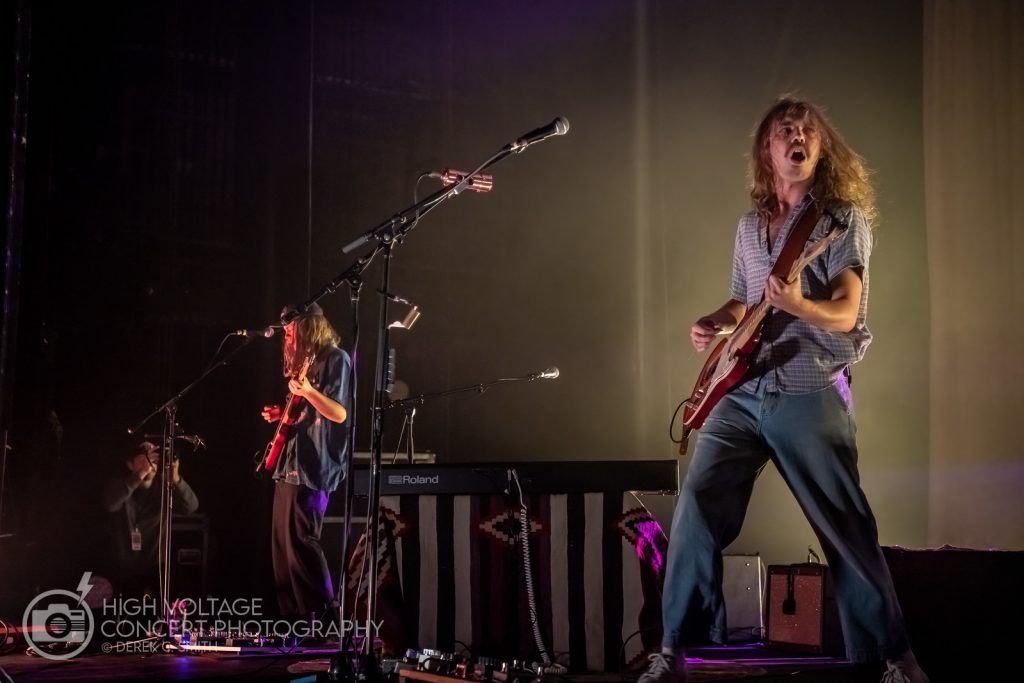 Waiting to Spill, the second full-length album and major label debut from The Backseat Lovers released on October 28, 2022, via Capital Records is brilliant. It is a fully-completed work of art, rather than an incongruous set of songs from a band searching for its identity.

What is particularly amazing about Waiting to Spill is that The Backseat Lovers, comprised of Joshua Harmon (lead vocals and guitar), Jonas Swanson (lead guitar and vocals), KJ Ward (bass guitar) and Juice Welch (drums and background vocals), are barely four years removed from high school. Bands this young are not expected to create albums with such depth, texture and emotion. Perhaps The Backseat Lovers are no ordinary band, though, as they have created a mature and confident album that belies their youth.

As a concept, the album is seemingly about the inevitability of adulthood and the struggle to navigate the gaping chasm between innocence and responsibility.  It begins with “Silhouette,” a lush, yet haunting song with a gradually increasing tempo and a pulsating rhythm that perfectly captures the sense of running that Harmon urges in his lyrics: “Run while you can/while you are still a silhouette of a man.”

Near song’s end, we are left breathless, as if we have succeeded in whatever we were running towards or away from (perhaps adulthood in either instance). With echoes of Pink Floyd, a single note then drones on until the sound of a car races across the speakers shortly before the guitar returns to crash into the opening lyrics of “Close Your Eyes,” a song that continues the album’s coming of age theme and, as Harmon has explained, “our relationship with our parents.”

A passionate song that builds to an emotional and anxious crescendo, “Close Your Eyes” suggests (to this writer) a youthful, and arguably naïve, fear of one day waking up to learn that your dreams are over because you’re an adult:

The clock, it ticks

I have to get older

The clock, it ticks
I have to get older (like your father?)

The thematic exploration of the journey to adulthood continues throughout the album, with songs of reminiscence (“Morning in the Aves”), reflection (“Growing/Dying”), and loneliness (“Viciously Lonely”). Despite such potentially heavy concepts, however, the album avoids falling into darkness; it is bright and honest, but not depressive. This is due in large part to the dynamic arrangement of the songs that often transition, much like our own emotional rollercoasters, between the soft and tender, and the upbeat and fiery (“Words I Used,” “Snowbank Blues,” “Follow the Sound,” “Slowing Down,” and “Know Your Name”).

The album, produced by Grammy award-winning producer David Greenbaum, also benefits from the use of subtle sonic experimentation and accoutrements (“Silhouette,” “Growing/Dying,” “Follow the Sound,” “Viciously Lonely”) that, coupled with the band’s superb musicality, creates an enchanting and captivating sound that transforms the album into a complete immersive experience.

But can they translate this feeling in concert?  The answer is a resounding “yes.”

At their recent show in Chicago on November 10, 2022, where they played Waiting to Spill in its entirety, The Backseat Lovers proved they are no mere studio darlings. If anything, they are an even better live act, performing with a confidence and precision that (again) does not seem to fit their age. It’s a sentiment that is obviously shared by others, as their adoring fans were lined up around the block long before the show and then packed the 2,500-capacity venue hours before the band took the stage.

The word is out about The Backseat Lovers.  Whether they are the ”next big thing” or already there, it is clear that this band is taking a backseat to no one. For more information on their tour, Waiting to Spill, or their prior releases including the self-produced EP Elevator Days, their first full-length LP When We Were Friends, or Live from the Troubadour, head to their website.