Being identical twins gives Andrew and David a sound that melds their voices into one melodic tone that rings to the steel guitar accompaniment by Greg Leisz whose credits include Willie Nelson, Dave Alvin, and The Eagles. 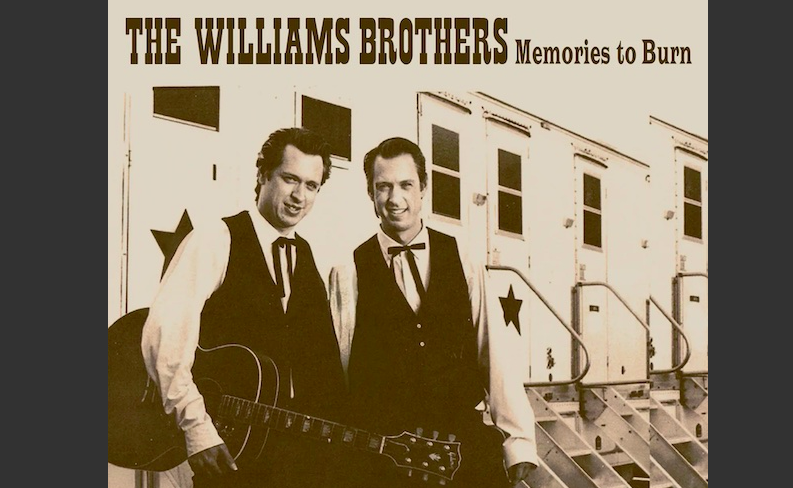 “My uncle is Andy Williams, the singer,” says Andrew Williams of The Williams Brothers. They’ve just released an album called Memories to Burn, an instant classic that comes so close to capturing the magic of The Everly Brothers it’s almost eerie. The close vocal harmonies of “Bye Bye Love” and “All I Have to Do Is Dream” are ’50s classics by Don and Phil Everly, two brothers who fused country and rock and roll into the soundtrack of an era that defined the post-war explosion of popular music.

“My uncle had bought the Cadence Records’ catalog in the ’70s, and in his office he had all of the Everly masters in his library,” says Andrew who, along with his identical twin David, have channeled Don and Phil Everly in an album that almost never came out.

“So, I would just stroll in there and look at these boxes. I would open them up and look at them and just be amazed at what I was holding, but that’s as close as I got to meeting an Everly Brother,” recalls Andrew.

The Williams Brothers released three albums on Warner Brothers from 1988-1994. On their second self-titled album, they scored a hit single with “Can’t Cry Hard Enough.” The song has been covered by artists worldwide, including Judy Collins, Victoria Williams (no relation), and more. With five million streams on Spotify, the song is also in the Library of Congress.

Although they never met their mentors, Andrew and David recorded 10 songs by artists as disparate as Dave Davies of the Kinks and folk singer Buffy Sainte Marie along with originals by their producer Marvin Etzioni that make one wonder if those boxes of Don and Phil demos didn’t include unreleased versions of these very songs. To make matters even more unusual, the music on Memories to Burn was all recorded 28 years ago, then stored away and forgotten.

“The whole thing is kinda surreal. It was a discovery to find this music that I had completely forgotten about,” recalls Andrew. “It was just sort of an out of the blue sort of thing,” adds David. “It brought Andy and I back together musically which was great. So, it’s been fun.”

David takes me back 28 years to tell the story. “We had put together this group of country songs that we were preparing for the “Grace of My Heart” film that Allison Anders directed. Producer Martin Scorsese hired us to play a fictionalized version of the Everly Brothers. So, we just got back into our Everly Brothers roots and culled these songs that evoked a period time. It was very simple. It was all done live. It didn’t take long to do, and it was just a really fun experience.

“(In the film) we were a fictionalized version of them called the Click Brothers. There was a Carole King character that had a different name. It was all centered around the Brill Building era, but it was so much fun. We got dressed up with faux pompadours in that era.”

“I had no recollection of making that record,” adds Andrew, “and then I found that picture that’s on the cover, and I thought that’s great. Let’s go ahead and do it because it makes sense.

“I just tried to pick the best take. Usually it was the second take, and there was one song where we took eight takes. That was ‘Tears Only Run One Way,’ and that was only because I’m having a hard time keeping up on some of the chorus.”

That song is the first single off the release.

“Nothing was over-thought. It was just very much instinctive, and I tried to keep that feel for the whole project.”

Being identical twins gives Andrew and David a sound that melds their voices into one melodic tone that rings to the steel guitar accompaniment by Greg Leisz whose credits include Willie Nelson and The Eagles. “I think we could read each other pretty well,” says David. “There was not that kind of weird ESP thing. Not that that’s weird, but we wouldn’t see each other for a day and we’d show up wearing the exact same thing. We kind of rebelled against it because my mother was an identical twin, too.  She dressed us alike when we were kids and so as soon as we were able to have opinions, we didn’t want to dress alike, and we rebelled against being twins. We felt it was kind of freakish in a way. We didn’t want to be the focus.”

“Basically, the thing that was so great about the whole performance was that nothing was over-thought out,” explains Andrew. “It was just very much instinctive, and I tried to keep that feel for the whole project. I had been kind of used to making records where I would sweat every decision, just do a lot of overdubs and fixes and things like that. And I was just in a very receptive mood with this one and taking it warts and all, just enjoying not being so tight -assed about the whole project.”

The whole album clocks in at just over 30 minutes on 10 songs. David and Andrew are big fans of the Beatles and were thrilled when Marvin Etzioni picked The Fab Four’s Abbey Road Studios to master the release. “Marvin said, ‘I’d like to use this guy at Abbey Road,’ and I said, ‘Oh, really? Ok, let’s do that.’ I loved the fact he was working with that holy sacred place,” comments David.

“I just have no expectations (of touring this album) at all,” says Andrew, “and I don’t have any interest in playing live, sadly. I wish I could be more excited, but who knows? I don’t know.”

Teasingly, I said to David in a separate interview, “Your brother said you’re going out on road in about a month, right?”

Andrew just chuckled. After all, identical twins can read each other’s minds. You caught me, I said.

“I wouldn’t mind doing it, but I think that Andy could do anything with me, so as far as doing something live, he said if we sell a million copies he’d consider it.”