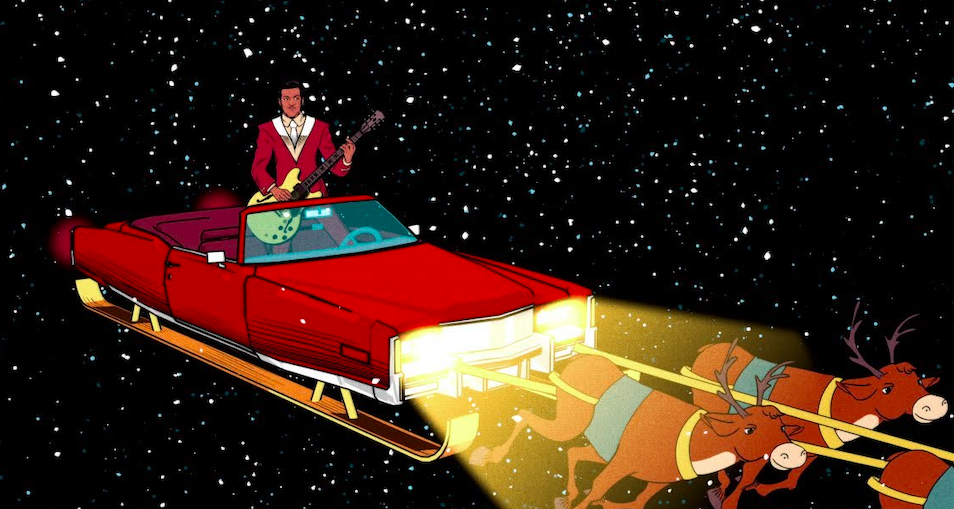 It is definitely beginning to sound a lot like Christmas. The thing about Christmas songs is there are so many of them. Some are joyous. Some are spiritual. Some are sad. Some are whimsical. Some are hopeful. Our Christmas playlist has some of each, and we would like to share it with you.

Michael Bublé recorded the holiday classic in 2011. The modern day crooner’s rendition calls to mind an early Frank Sinatra with a hint of Dean Martin as well. The song references the Grand Hotel that many believe is a reference to the Park Inn Hotel in Mason City, Iowa. The Park Inn Hotel is the last remaining hotel in the world designed by architect Frank Lloyd Wright.

Johnny Moore’s Three Blazers first recorded this R&B classic in 1947. It is credited to Johnny Moore and Lou Baxter but anecdotally Moore’s pianist and vocalist Charles Brown may have had a hand in writing it. It became a hit in 1958 after it was re-released on Chess records. Many artists have recorded it over the years, including Chuck Berry, Charles Brown with Bonnie Raitt, Otis Redding, and Rod Stewart. The version by Bruce Springsteen and the E Street Band came highly recommended and is the one that made our playlist.

Speaking of modern day crooners, Josh Groban makes the list with this spiritual classic. This 19th century carol is based on a French poem by Placide Cappeau with music added by composer Adolphe Adam. John Sullivan Dwight wrote the English version. The song celebrates the birth of Christ as humanity’s salvation. It also has the distinction of being the first Christmas song ever played live over the radio back in 1906. Groban’s recording is from 2002, nearly 100 years later.

This song has been covered by the Eagles, Bon Jovi, Aaron Neville, John Legend, and James Brown among many others. It was written and first recorded by Charles Brown after he had been challenged by record executive Syd Nathan to write something as good as “Merry Christmas Baby.” The version to make our list is by brothers Johnny and Edgar Winter.

Bobby Helms hit the charts with Jingle Bell Rock back in 1957 when rock and roll was still in its infancy. It has since become a staple of the Christmas rotation for radio stations across the country. Helms himself has re-recorded and released the song several times. Numerous artists including George Strait, Rascal Flatts, and Blake Shelton have covered it. Randy Travis recorded the version on our list for “A Very Special Christmas 2,” the second in a series of Christmas-themed compilation albums produced to benefit the Special Olympics.

Brian Setzer wrote this one and recorded it with The Brian Setzer Orchestra in 2005. Even in his post-Stray Cat days Setzer is a master of the rock-a-billy sound and still jumps, jives, and wails with the best of them. It was covered by the a cappella group Straight No Chaser in 2009.

A song of hope and belief, Stevie Wonder first released the song in 1966. It was included on Wonder’s album of the same name a year later. The lyrics are simple but not simplistic. Love, peace, and freedom will bring a better life for all – someday. “Maybe not in time for you and me.” These things don’t happen simply by making a wish. Still, there is always hope they will happen “someday at Christmas time.”

“Have Yourself A Merry Little Christmas”

Hugh Martin and Ralph Blaine wrote the song for Judy Garland to sing in the movie Meet Me In St. Louis. The song is upbeat suggesting hope but is based in sadness. “Next year all our troubles will be out of sight” no matter what we may be going through now. Those happy days of years gone by will return. We just have to have faith. Englebert recorded the song back in 1980.

“Joy To The World”

This song is an English Christmas carol written in 1719. It has been the most published hymn in North America since the start of the 20th century. The song celebrates the coming of Christ as savior of the world. Pentatonix released a very upbeat and joyous a cappella version in 2014.

The song is also known as Run Rudolph Run and is another tune from Rock and Roll infancy. Chuck Berry wrote the song in 1958 and with lyrics about “whizzing like a sabre jet” it gave Rudolph a bit of an attitude. Unfortunately for Berry, Rudolph was copyrighted by Johnny Marks who wrote “Rudolph The Red-Nosed Reindeer.” Berry had to give up his publishing rights to Marks. “Run Rudolph Run” has been used in the movies The Santa Clause 2, Cast Away and Jingle All the Way to great effect.

Watch for part two of our list. Right now, we want to wish you the best of the holiday season. May this be a time of peace, happiness, and hope for you and for those who are dear to you.