Venable is the real deal. 'Puppet Show' would be a mature album for someone twice her age. 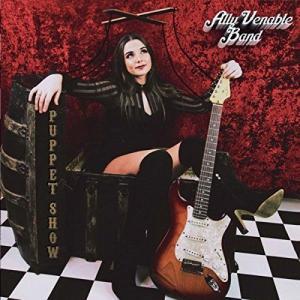 It’s easy to be skeptical of teen music prodigies. A certain amount of creating art is experience, and most teens don’t have the amount of experience required to create compelling art.

Ally Venable is 18-years-old, but she is also a talented singer and guitarist who proves that looks and assumptions can be deceiving on Puppet Show, her sophomore album. She might be young but she is far beyond her years in ability.

Venable is an old-school rock singer and guitarist. Her playing moves blues to blues rock to rock to metal to country. It’s not about the genre, so much as it’s about the solo and what’s right for the song. “Bridges to Burn,” performed with guitarist Lance Lopez, has a blues metal groove but Venable’s vocals have a slightly disaffected tone that keeps the song from sounding cheesy or generic.

Venable and Lopez both go crazy in their solos, which build deliberately, the two taking turns trying to take the other down. The soloing is never indulgent, though. Both play a few bars before turning things over to the other.

“Cast Their Stones” is more of a vocal showcase for Venable, who also has a strong, powerful voice. “Puppet Show,” with its big, desperate chorus, also shows off Venable’s considerable vocal abilities, which show a maturity beyond her 18 years. However, despite a great voice, the guitar is the star of this album and “Comfort in My Shadows” is her guitar-playing showpiece. It’s a slow blues with Stevie Ray Vaughan style clean-tone runs, Hendrix fuzz, and jazzy discipline where the solos are almost compositions by themselves. She can play fast but, she also plays musically.

The album’s best moment is “Sleeping Through the Storm,” a straight-forward blues boogie that somehow morphs into a Stevie Nicks song for the chorus. While in general the songs on Puppet Show are well-balanced regarding guitar and vocals, this song does the best job of integrating her vocals and blues-inspired guitar playing into something new, song-wise. It’s almost what Fleetwood Mac might have been had they stayed a blues band but also taken on Nicks.

Venable is the real deal. Puppet Show would be a mature album for someone twice her age. It’s tough for anyone to balance acrobatic vocals and acrobatic guitar playing in a way that doesn’t sound like an awful afternoon at Guitar Center. It’s surprising and impressive that Venable has done it at such a young age.