Blues Hall of Famer Eddy “The Chief” Clearwater Dead at 83 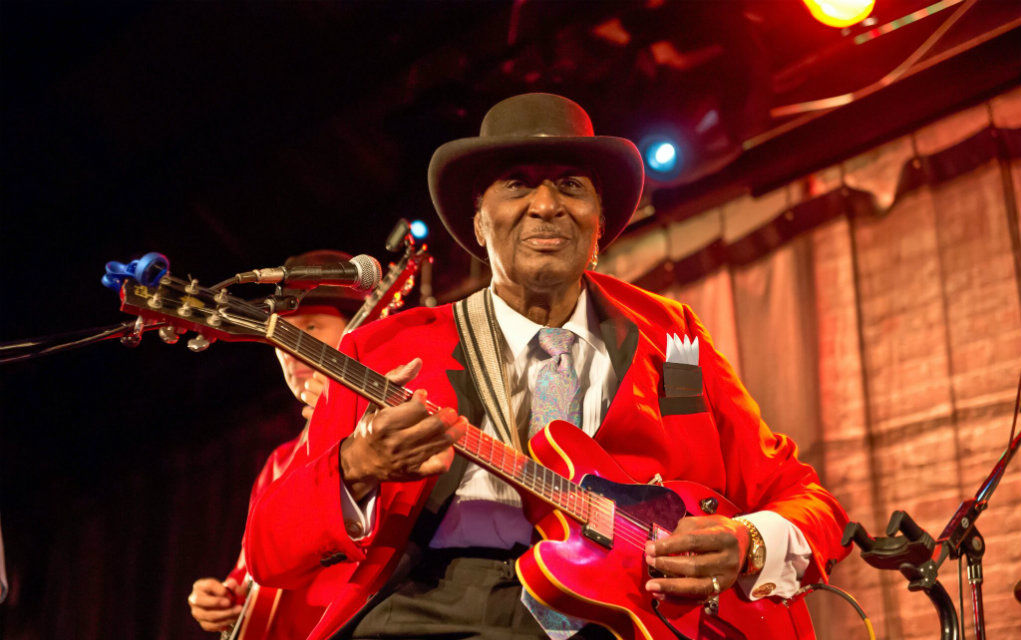 Eddy “The Chief” Clearwater passed away this morning from heart failure. His death was confirmed by long-time publicist and “adopted niece,” Lynn Orman Weiss. Clearwater was 83.

Ironically, in an April interview with American Blues Scene, Clearwater stated that he had recently visited his cardiologist, who gave him a clean bill of health. “In fact, last Tuesday I saw my cardiologist, and he gave me a high five, saying I was in pretty good shape.” he told us. “I said, ‘Well coming from you, that’s good news!'” Clearwater had suffered from heart issues however, having undergone triple-bypass surgery in 1997.

Born Edward Harrington on January 10th, 1935 in Macon, Mississippi, he was raised by his Cherokee grandmother before moving to Alabama in 1948. That’s when he first picked up a guitar, teaching himself to play. Being left-handed, and with no formal tutelage, he played the guitar upside down. Some of his first professional gigs were with the gospel group, the Five Blind Boys of Alabama.

Moving to Chicago in 1950, Clearwater began developing his signature blues style. Influenced primarily by the music of Chuck Berry, he was also introduced to West Side Chicago artists including Magic Sam, and Otis Rush by his uncle, Atomic H record label owner Houston Harrington. By the age of 18, he had adopted the moniker “Guitar Eddy.”

Not long afterward, his first manager, Jump Jackson, began calling him “Clear Waters,” a play on the famous Muddy Waters name. It was under this name that he recorded his first single for Atomic H, “Hill Billy Blues.”

He acquired the nickname, “The Chief” in 1980, when a fan gifted him a Native American style headdress, which we wore, on horseback, for the cover of his album by the same name. By this time, Eddy was a successful act on the North side of the city, garnering fans among the college students in that area. He made his home in Skokie, Illinois, continuing to play the clubs of the Chicago area, as well as a great many International tour dates.

Among his many accomplishments were 17 album releases, a Grammy® nomination in 2004, and the club, Reservation Blues, which he owned with his manager wife, Renee Greenman for many years. According to Weiss, Clearwater and Greenman had renewed their vows on the Legendary Blues Cruise, with LLou Johnson officiating, and Rick Estrin acting as best man.

Most recently, he had released the album Soul Funky with Ronnie Baker Brooks and Billy Branch. He was currently writing new music with Brooks. “Ronnie and I are working on a new one right now,” Eddy told us. “He’s been coming over to my house to work on it. We’re working on brand new songs together. We’re looking at either the end of this year, or the beginning of next year to release the new album on Alligator Records.”

In 2016, Eddy “The Chief” Clearwater was inducted into the Blues Hall of Fame in Memphis, Tennessee.

A soft-spoken, witty man, Clearwater transformed into a firebrand on stage. His flamboyant, colorful performances, and mild-mannered offstage persona will be mourned and remembered by millions.

Funeral services are planned for Tuesday, June 5th in Skokie. Details and a guest book can be found here.

Please feel free to leave your remembrances of Eddy Clearwater in the comments below.