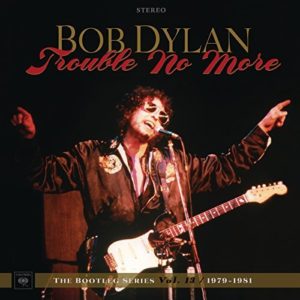 The latest chapter in Columbia/Legacy’s highly acclaimed Bob Dylan Bootleg Series showcases the music Dylan wrote and performed during one of the most surprising, controversial, and inspired periods of his career.

As the 1970s ended and the 1980s began, Dylan responded to the changing of the decades with a three album trilogy–Slow Train Coming (1979), Saved (1980) and Shot of Love (1981)–of spirit-filled songs of praise, worship and devotion. These songs were as deeply personal and packed with poetics as any Dylan had ever written, but the force of conviction and power of faith evident in these performances baffled segments of Dylan’s fanbase (just as Dylan’s “going electric” had alienated folk purists in 1965).

The live concerts from this crucial epoch in Dylan’s history contain some of the most intensely jubilant and transcendent performances of his career. Bob Dylan – Trouble No More – The Bootleg Series Vol. 13 / 1979-1981 offers fans and music lovers the opportunity to fully experience for the first time this extraordinary chapter in Bob Dylan’s musical journey.

Available exclusively on the deluxe box set is a DVD which includes Trouble No More: A Musical Film, a new feature-length cinematic presentation combining unreleased footage from Dylan’s 1980 tours with new material written by Luc Sante and performed by Academy Award nominee Michael Shannon. Directed by Jennifer Lebeau, “Trouble No More” has been selected to premiere at the prestigious 2017 New York Film Festival. Bonus extras on the box set’s exclusive DVD include a rare performance of “Shot of Love” from Avignon 1981 and more.

The release will also be available in 2CD and 4LP configurations featuring the first two discs from the deluxe box.

With the exception of “Ye Shall Be Changed,” released in 1991 on The Bootleg Series, Vol. 1-3, none of the tracks on Trouble No More have been previously released. This collection debuts 14 previously unreleased songs and a multitude of unreleased live performances, rare studio outtakes and more.

Included in the deluxe edition:

Gotta Serve Somebody
I Believe In You
Like A Rolling Stone
Man Gave Names To All The Animals
Maggie’s Farm
I Don’t Believe You
Dead Man, Dead Man
Girl From The North Country
Ballad Of A Thin Man