"We ingest all kinds of horrendous crap in our music; it’s just like poison, and it’s really popular and people love it, but do you really want to be taking that?" 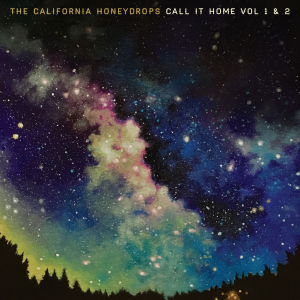 The California Honeydrops have come a long way since their humble beginnings busking in California subway stations. Eleven years on they’ve released six studio albums, traveled the world playing shows for thousands of adoring fans and worked with some of the biggest names in the blues.

The Bay Area band’s music is a positive force full of feel and finesse, and they’ve slowly but surely become a staple for contemporary American rhythm and blues, giving the world a much-needed dose of real music.

I caught up with founder and frontman Lech Wierzynski, and co-founder/drummer Ben Malament after a recent set at Byron Bay Bluesfest to discuss their new double LP Call It Home Volumes 1 & 2. We also touched on collaborating with Bonnie Raitt, why music is a drug that needs to be used with caution, and why it’s so important for people to embrace the wisdom in older things.

Welcome back to Bluesfest! I know you guys play a lot of festivals around the world so how do Bluesfest and its crowds compare?

Lech: Bluesfest crowds are musically attentive, and I think because it’s a mix of ages it makes it a nice crowd to play for. We can do our party thing, but we can also bring it down and do some things that are hard to do on the festival scene.

So what’s your favorite song to play live?

Lech: We never know! Every night is different; we don’t really make set lists so we literally just play what feels right that day.

You’ve just released your new double LP, Call It Home Volumes 1 & 2. How do you go about the writing process? I know there are quite a lot of you in the band.

Lech: I write a lot of the songs then bring them to the band. I get a lot of songs in my dreams so I’ve woken up with songs kind of ready to go, and then other times it’s a slow process. It all depends but that’s kind of what usually happens. I’ll have a vague idea, put some words in, bring it to the band and we’ll start playing and then see what happens. The song is usually just the words and the melody and we’ll try all kinds of different grooves with it.

Cool, and so what are the common themes throughout this new record?

Lech: The main theme is the idea of home. I was born in Warsaw and I immigrated as a kid to the United States, and then moved around a lot within the United States. So, having been in a foreign household with foreign speaking parents you start to wonder where you belong a little bit.

Since then I have settled in the Bay area where we’ve all lived for the last 15 years, and I think we all felt very at home there but because of the changing economy that we’re dealing with we can’t really afford to live there anymore. People are being priced out. It’s a really big problem, and it’s happening here too. So that feeling of being kicked out of a place that I was finally feeling really comfortable in, bringing up those old feelings and stories, got me thinking of my own process of finding my way.

Yeah, that’s great. Now I know that Bonnie Raitt performs on the record. How did she get involved? Did that just happen from touring with her?

Lech: She’s on “Call It Home,” the title track. We toured with her, and she originally heard one of our songs and wanted to record it so she wanted to meet us, and we were like “yeah of course, to ask as if we were going to say no.” So we were like “of course you can do our song.” Then she took us on the road, and that song in particular we would warm up singing it. She would come by the dressing room and poke her head in there and say “Can I sing with you guys?”

Ben: We would sit all nonchalantly, and sing with her. She’s great, and she can hang! She can curse like a sailor; she is something else. The night in the studio for “Call It Home,” I’d say it was about 40% recording and 60% hanging out, if not more! It was awesome; so fun.

That’s amazing. Are there any other special guests on the album?

Lech: There are a lot of people, Mike Finnigan, Bonnie’s keyboardist.

Lech: Yes, he’s a really good singer! So we have him on the record, and Kid Andersen who’s here at the festival with Rick Estrin and the Night Cats. He’s a great guitar player.

Ben: He plays bass and guitar on the record. We also have several percussionists, Nicki Otis, Johnny Otis’ son, Shuggie’s brother, a Bay area R&B legend. There are so many. Get the album and read the liner notes!

Do you guys have a favourite song on the album?

Ben: “Coming Around” is awesome; it’s one of my favourite tracks that we recorded. Everything sounds really good, it feels good, and it’s a great track to just dance to. That’s my favourite on the album for sure, but it is hard to choose because I love them all.

Lech: I like the first song on the second side, “The Only Home I’ve Ever Known.” We played it yesterday, another debut! We like to change up the set list though, we don’t like to just push one record during a set, but management they sometimes tell us to play the hits.

Yeah, like “When It Was Wrong,” and “Don’t Let The green Grass Fool You.” I can imagine you’d get sick of playing them.

Lech: Yeah, we do, but today we hadn’t played them in so long. It was fun, it’s a good thing, you guys get it and it doesn’t just have one or two emotions on it. We really put something in it.

Ben: And even when we do play them night after night it’s about keeping a good energy, for us.

Lech: It’s easier when the songs are stories. Those are story songs so we can always get into telling the narrative aspect of it.

Yeah true, and so seeing you on stage Lech you have this wild energy that seems to just come out of nowhere, it’s almost as though you’re on drugs. What gives you that energy when performing?

Ben: Alright, let’s list the drugs he’s ingested this morning. The set was at 1:15, and starting at 9 he had a cocktail of…

Lech: No but really being in front of that many people is like “Whoa.” Honestly, sometimes it’s nerves, and I’m tapping into some kind of other energy. I’m very fortunate because I’m up front so I’m not tied down; Ben’s got to sit down. I can dance it out, and usually if I’m feeling nervous you’ll get a more energetic show. I’ll just start bouncing all around the place, but you know the music also gets me. I love the music! They can tell you if music comes on after the show we’ll start dancing. There’s nothing better; we can dance all night. Music is a drug, use it wisely.

Ben: Use it wisely.

Lech: Well it is you know: People are really all about their food and these days people are getting more picky about their food, like “Give me organic. I’m not eating this kind of food. I don’t want factory farmed, or pesticides.” Things like that. I think we’re a little behind when it comes to our music, you know. We ingest all kinds of horrendous crap in our music; it’s just like poison, and it’s really popular and people love it, but do you really want to be taking that? That factory produced, “I’m just trying to get rich off you” music… Do you want that?

Lech: Yeah, that’s a question people need to ask themselves.

Amen to that. Now Lech your voice. It’s incredible! How did you develop your style of singing? Who inspired you?

Lech: I practiced a lot. Ben will tell you, we lived together. In terms of inspiration, it just kind of started with what was working for me. I started singing late, when I was in my late twenties. I had a bunch of lessons, and learnt from a lot of people. It took a long time and I wasn’t a singer but we weren’t going to hire somebody else. I was inspired by all kinds of singers: Sam Cooke is a huge one. I studied Sam, and it was really hard. I still can’t do the Sam thing. But he is like a pinnacle for technique.

You don’t need to do the Sam thing, because you’ve got your own thing going on!

Lech: Yeah! And that’s what happened with the other singers. I really wanted to sound like Ray Charles, and Sam, or tell a story in the way they did. Then other singers came into my life like Claude Jeter From The Swan Silvertones. Really, he is a Gospel singer; they call him “the Father of falsetto.” People like Al Green and Curtis Mayfield, they all kind of come out of Claude Jeter, and he was a singer that really had me exploring singing high.

At first I didn’t do that, but then I thought “well maybe this would be a good spot for me” because I wanted to sing big all the time. I wanted to belt earlier but I wasn’t that good at it; I was throwing my voice out. So I started singing higher and lighter and I was like “I can do this!”

Nice. Well it’s definitely worked because you’re one hell of a vocalist now. I have one last question, what gives you the blues?

Ben: Do we even have time for all this? Do you see all these grey hairs? All these wrinkles.

No see, I’m going to stop you there. I was having this conversation yesterday and I think the issue there is that society needs to change their tune on getting old.

Lech: Yeah, see I agree with that.

Ben: I do love it when women have that silver in their hair.

Like Bonnie Raitt with that one strip of silver!

Lech: Yes, I know right. That’s what I’m talking about! But I think what you just said touched on something that gets me down; this youth-oriented culture. There’s this way in which the world has problems because we haven’t changed enough, and so we go into this mode where we think we’re going to go in and make everything better. That has led us to where we are today, where we think we can update everything and improve on everything and all of a sudden, we’re like “oh my god, we’re about to tear this planet down.”

So, there’s a lot of wisdom in older things. In the band we play a lot of older music and we do it our own way, but I do think we have trouble marrying tradition and creativity in our culture, and it can be destructive, it’s that middle ground it seems like today.

No one wants to see everybody partying together, it’s not “cool.” They want to see just the young kids, the sexy young shiny people, but the truth is the best parties in the world have everyone from young folks to old folks together, I think that’s something that’s not really on our radar, it’s not sexy enough for today.