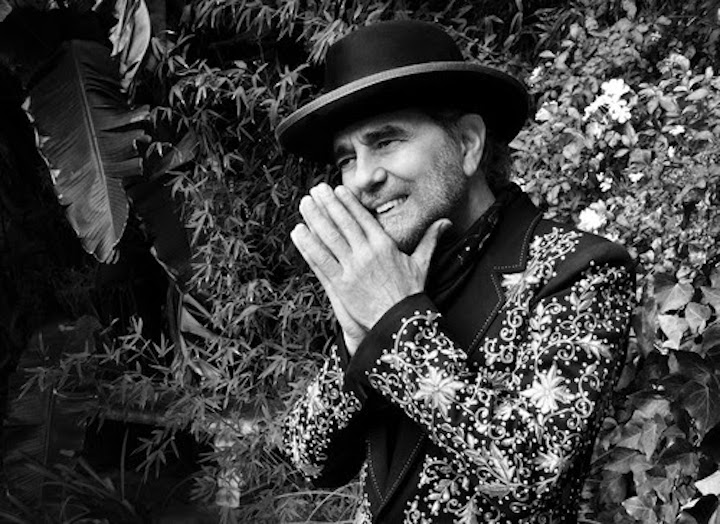 Daniel Lanois has earned 11 Grammys for making music as a producer, musician and songwriter working with everyone from Willie Nelson to Neil Young for nearly half a century. His production credits on albums like Dylan’s Time Out of Mind, U2’s Joshua Tree, and Peter Gabriel’s So have helped set enough trends for Rolling Stone to dub him “the most important record producer to emerge in the ’80s.” But he insists he never set out to establish popular music movements with the artists he works with.

His goals are more sharply focused and intimately fundamental than that. He sets out to create music as art rather than inspiring mass movements. “We hope to pull out the unexpected or the unknown or what might be living a few onion skins below the surface, and that’s what’s interesting about art in general.  We can look back and see there were movements in time, but I don’t think people at (any) time thought that they were part of a movement necessarily. It was just what was exciting to them.

“I made a blues record with Bob Dylan, Time Out of Mind. Are you hearing familiar roadhouse blues band tonalities? Are the sentiments blues based? Is the framing similar to the blues base? Yes! What did we do? We stepped over the common place of it, and we took it to the future because I was trying to sense the spirit more so than the blues form. I accepted that we had responsibilities to the form to a degree, but I wanted to make sure that we stepped into the future, and I think we succeeded quite well in a few places on that record, and we accepted the same position in the making of the Heavy Sun record.”

His new album, Heavy Sun, created with a band of the same name is so “now” it transcends even the suggestion that it might click into a “movement.” Painted in the warm pastels and the ethereal bliss of Johnny Shepherd’s Hammond organ, this 12-cut odyssey transports the listener into a place that promises peace. It’s as if the pandemic has slowed down the manic drive of humanity, and we are halfway home to heaven. And Lanois is the perfect guide. The press release for the album describes the arrangements as “spacious and dreamy, anchored by rich, righteous organ topped with airy falsetto and mesmerizing four-part harmony, and the writing is buoyant and soulful to match.” And that’s not hyperbole.

Johnny Shepherd, organist with the Zion Baptist Church in Shreveport, Louisiana, is the secret weapon that makes this album work. “His pop has a church there. He’s a (rousing) singer, a great pastor. I was invited to sit in with the church band and choir a few times, and the choir director was Johnny Shepherd, organist, choir director and great singer. I was impressed with his talent. His term came to an end at that church, and I invited him to join me in L.A. with (guitarist and vocalist) Rocco DeLuca and (bass player and vocalist) Jim Wilson for us to have a singing quartet. We call that Heavy Sun.” Daniel also sings and plays guitar.

“To ask someone who’s only ever sung in church (to step out of that environment) is quite an undertaking for someone like that, so he wanted to make sure things were going to be looked after. The main criterion was he wanted to make sure every song had a good message. I said, ‘No problem, Johnny. We can do that.’ And so, as we went along, we invented the term ‘the church with no walls,’ and Johnny saw the wisdom in that.

“At a certain point, he realized: isn’t it great to spread the gospel outside your church and to reach a lot of eardrums out there with some nice, joyful songs. We saw that as a way of taking the gospel to the future.”

I told Daniel that Shepherd’s role in bridging the religious with the secular and coming up spiritual reminded me of the feelings I had when I saw Al Green preach at his church in Memphis.

“I think it’s a fair assessment,” says Daniel. “Perhaps simply put, with the use of the Hammond organ we get that automatic tone, that feeling of congregation, that familiar feeling. Isn’t that the job at hand with anything?

“Yes, Johnny Shepherd is from the Baptist Church. Yes, he is. I came up as Catholic kid.  I served at the altar. Yes, I did. And everybody sang in the choir, and everybody has our association with churches along the way because we are humans, and there are churches, but that doesn’t mean to say come record making time, you will adopt the most obvious position. We want to (go to) a new place, and I think we did it a few times. We’re not talking about heaven or hell or limbo or anything. He’s just talking about a place, a dimension you might get to.

“I think that’s why people go to church because they’re looking to be a member of that dimension, and it’s oftentimes clarified to them by the set of rules and expectations of the church, but then there might be a proper way to think about all of this. People on the move I think feel a little of this. People that localize don’t feel this. (Travel) has that in it. It’s seeking a new world, a new life, or new dimension. ‘Under The Heavy Sun’ (one of the songs on the album) talks about a place (like that) where you get to leave your ego at the door.”

My favorite Lanois production effort is The Neville Brothers’ Yellow Moon, a 1980s release that I consider their signature album. Daniel describes how he established the ambiance that brought the best out in the brothers.

“I set up a studio right around the corner from Valence St. where the Neville Brothers were living because I didn’t want them to be too far away geographically from getting good work done, and we rented a little six-story apartment building that had been abandoned and set up a studio for them. That’s what we were committed to. I set up the studio for the brothers for them to feel special.

“Art Neville brought his stuffed bobcat over, and we had a little bit of fun decorating the place, but I think what was most important was they were ready to respond to the level of commitment we brought, and their street was just around the corner. I believe everybody felt that, and the intentions were greatly honored, and we rose to the occasion of each brother whether it be winning a Grammy Award for the best instrumental that year for Charles Neville, the saxophone player for the Neville Brothers. Wasn’t that great? And he played beautifully. I loved him. I think he felt the love.

“I think the Nevilles really felt the love on our rendition of (Bob Dylan’s) ‘With God on Our Side’ when Dylan stopped in and said, ‘That sounds like a record.’ Did we bring the swamp into the studio? We certainly did, but we brought commitment which was most important.”

Heavy Sun was recorded before the pandemic hit. Was Daniel prescient in creating his church without walls on this recording? “I’ve heard that from several people,” he says, “and I don’t know what to say about that other than maybe it’s been said that artists have a premonitional bone in their body.”

Premonition maybe, but don’t tell him he’s started another movement.