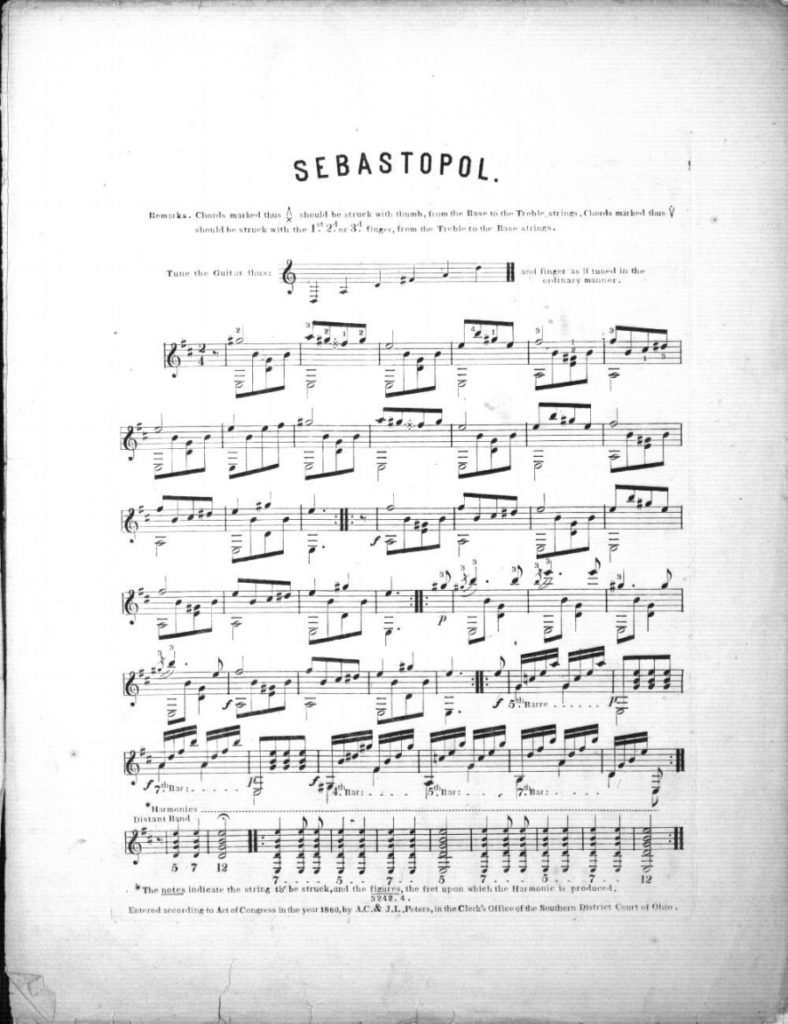 Language of the Blues: VESTAPOL

Vestapol is an open D Major tuning for the guitar. This means that if a guitar tuned in Vestapol is strummed without fretting any notes, it will produce a D Major chord (D A D F# A D).

Vestapol tuning was used quite often in the parlor guitar music that was popular from the mid-1800s to the turn of the century. It got its name from the 1854 publication of an instrumental called “The Siege of Sevastopol,” named after the eleven-month siege of a Russian naval base at Sevastopol in the Ukraine during the Crimean War.

“The Siege of Sevastopol” being something of a mouthful, the tune became known as “Vastapol” and then “Vestapol.”

Slide master Elmore James used the Vestapol tuning to rock out on “Dust My Broom,” his electrified cover of Robert Johnson’s “I Believe I’ll Dust My Broom.” Blues legend Robert Jr. Lockwood, who lived with Robert Johnson for seven years while Lockwood’s mother was Johnson’s girlfriend, told me that Johnson “tuned it [his guitar] in Spanish [open G Major] and in Vestapol.”

Blues players sometimes also call open E Major tuning (E B E G# B E) Vestapol. Chicago blues guitarist Jody Williams learned how to tune his guitar to Vestapol in E from Bo Diddley. As a child, Williams played harmonica in a group called The Harmonicats that played standards like “Stardust” and “Peg of My Heart” on radio and amateur shows.

Williams told me that he met Bo Diddley, also a youngster at the time, at an amateur show. “He had one guitar and a washtub bass,” Williams recalled. “That’s the first time I paid attention to the sound of a guitar. We got together backstage then and we played a little bit and I asked him, if I got a guitar, would he teach me to play a little something on it. He said he would and the next week I spied a guitar in a pawnshop for thirty-two dollars and fifty cents. So he taught me how to tune it to his tuning. It was open E. He called it Vestapol.”

Williams never did learn to play guitar in standard tuning (E A D G B E). He taught himself to play the blues by imitating players he admired, such as T-Bone Walker and B.B. King, and created his own chord voicings. By the 1950s, Williams was a top session player for Chess Records, and a member of Howlin’ Wolf’s band.

“I was one of the first guitar players around Chicago that could play B.B. King’s style,” Williams said. “If somebody was onstage listening, and they don’t see me, they don’t know if it’s me or him playing. So, when I worked for Howlin’ Wolf, one day in 1954 we were in Chess studio playing, and I was playing some down. I didn’t know who he was. I notice he’s watching me. Watching my hands, watching my fingers, you know. Watching my guitar work.

“So I say to myself, ‘This dude trying to steal my stuff!’ And I’m sitting there just ripping off B.B. King, playing B.B. King style. So I get up, and I move my chair to where he couldn’t see my hands. I say to myself, ‘He’s sitting there trying to steal my stuff. I am not going to teach this dude anything!’ I figured he was a guitar player, the way he was watching me. I said to myself, ‘If he know his guitar, if he know his instrument well enough, he can learn what I’m playing just by listening.’

“It went on like this for a few more songs with him sitting there trying to watch me. Then Leonard Chess said we gonna take a break and play the songs back that we had recorded. So I put my guitar down and go over to the piano and start talking to Otis Spann. Wolf called me over to him and he said, ‘Jody, I want you to meet a friend of mine. This is B.B. King.’ Oh man! I looked around and I said to myself, ‘The studio is too small for me to hide in!’ He was trying to see what I was doing ’cause he didn’t know how the guitar was tuned.”

That day B.B. King, Jody Williams, and Otis Spann recorded “Must Have Been the Devil” and the famous instrumental “Five Spot.”
Pick up a signed copy of The Language of the Blues today!