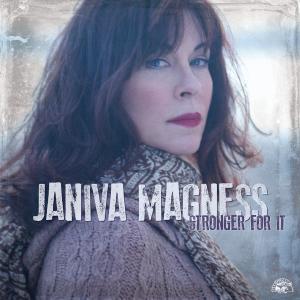 Stronger For It is the latest release from Janiva Magness on Alligator Records. Janiva is the authoritative, hard working blueswoman with a voice built for the blues; deep and inflective. In a word, her new album is “Gospel” — The gospel of the formidable blueswoman, the gospel music that seeps it’s way into nearly every track, the gospel of unmistakably moving vocals.

Stronger For It  starts out with a cool groove and a frank, strong take on a man who very well might be in danger of catching a well-deserved shiv by the blues diva. “Make it Rain”, a Tom Waits tune & and enlightened choice for the album, keeps some of the Waits funk, but Magness lays a distinct ownership on the number. The drums on “I’m Alive” give it a primal groove as Magness sings about surviving heartbreak. “You Got What You Wanted” is a bold and faithful rendition of a Tina Turner number, with a perfectly soul-filled B3, backup vocals, and a rockin’ percussion. Janiva’s vocals shine magnificently on the track. “I Don’t Want To Do Wrong” showcases a beautiful set of backup vocals underneath the mighty pipes of Magness, with a skillfully placed & tonal lead guitar and one form-fitting, classic B3 solo.

Possibly two of the most emphatic numbers lay towards the end of the album, in the yin-and-yang pairing of “Things Left Undone” and “Whoop and Holler”. It’s here that the sheer power of Magness’ Gospel shines the brightest. Whoop and Holler is an infectious get-up-and-dance number straight out of the most southern gospel church on earth. “Things Left Undone” paints a more existential picture of life — A tearjerker that demands repeat listening.

Nearly everything about Stronger For It is dripping with potency; from the blues singer’s powerful notes to the lyrics and sheer force of the music. “I might get cut,” she croons firmly, “and I might bleed, but I won’t cry.” The tracks have a familiar appeal, with themes of overcoming trials and challenge, and also taking a glimpse into the deeper meanings of life. Much of the music has a classic throwback appeal to the early days of R&B and Soul, with blues and gospel being the common keys.  The sure sign of a powerful album is how long it stays in our player, and this has been a staple since we got the big, yellow Alligator Records package in the mail.

Let’s call it what it is: Stronger for It by Janiva Magness is a damn fine album that demands a place in blues fan’s hearts and collections.

Pick up a copy of “Stronger For It” at Alligator Records 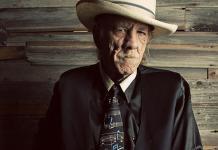