Lance Lopez shows off his major skills with “SALVATION FROM SUNDOWN”

“SALVATION FROM SUNDOWN” is the 5th studio album from hard-hitting Texan, Lance Lopez. 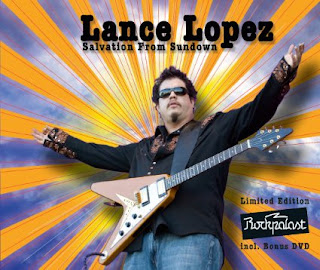 He got an early start on his career as a guitarist and has been a professional musician since the age of 14 when he began playing local bars in and around New Orleans.
Lance displays some very slick moves on the guitar and he plays like a machine, a well-oiled machine! He definitely knows his way around that Flying Vee and it is no wonder he has opened for and played with some of the best musicians in the world, including Lucky Peterson, Johnnie Taylor, Bobby Rush, Jeff Beck, Steve Vai, Joe Bonamassa and many others.
The first song on “Salvation From Sundown” is a gutsy, gritty guitar driven track, actually most of this release is driven by the guitar and why not? If you have your instrument mastered the way he does, you might as well use it. This guy has a lot of riffs in his arsenal and is not afraid to use them at all. I heard a lot of finger-tapping, hammer-ons and pull-offs as he shows off his talents on several songs but “Romeo” was over the top for me. That is straight-up blues-rock or rock-blues, in fact I think we’ll call that adrenaline blues from now on.
Lance Lopez is also a great blues singer with tons of energy and he really brings an element of soul to this release, especially on the last song “Why”. He also does very nice electric guitar work in that song.
The rhythm section does a stellar job holding down the fort, while providing a healthy lower end with great blues beats and just enough rock undertones scattered underneath to help keep up with the brilliant guitar playing.
Tony Valdez lays down some pretty thick bass lines throughout this entire CD but stays out of Lance’s way as does Cody Norman on the drums. They are both definitely very competent players and they fit in nicely, which can be a little tough sometimes with a monster guitar player such as Lopez.
“SALVATION FROM SUNDOWN” was produced by Jim Gaines. It is a great listen and I can’t find anything negative to say about it at all.
I’m a big fan of adrenaline blues and this CD delivers a healthy dose.
If you are fan of guitar driven blues, I know you will enjoy this.
Once again, I’m gonna give this a 5 bluestar rating.