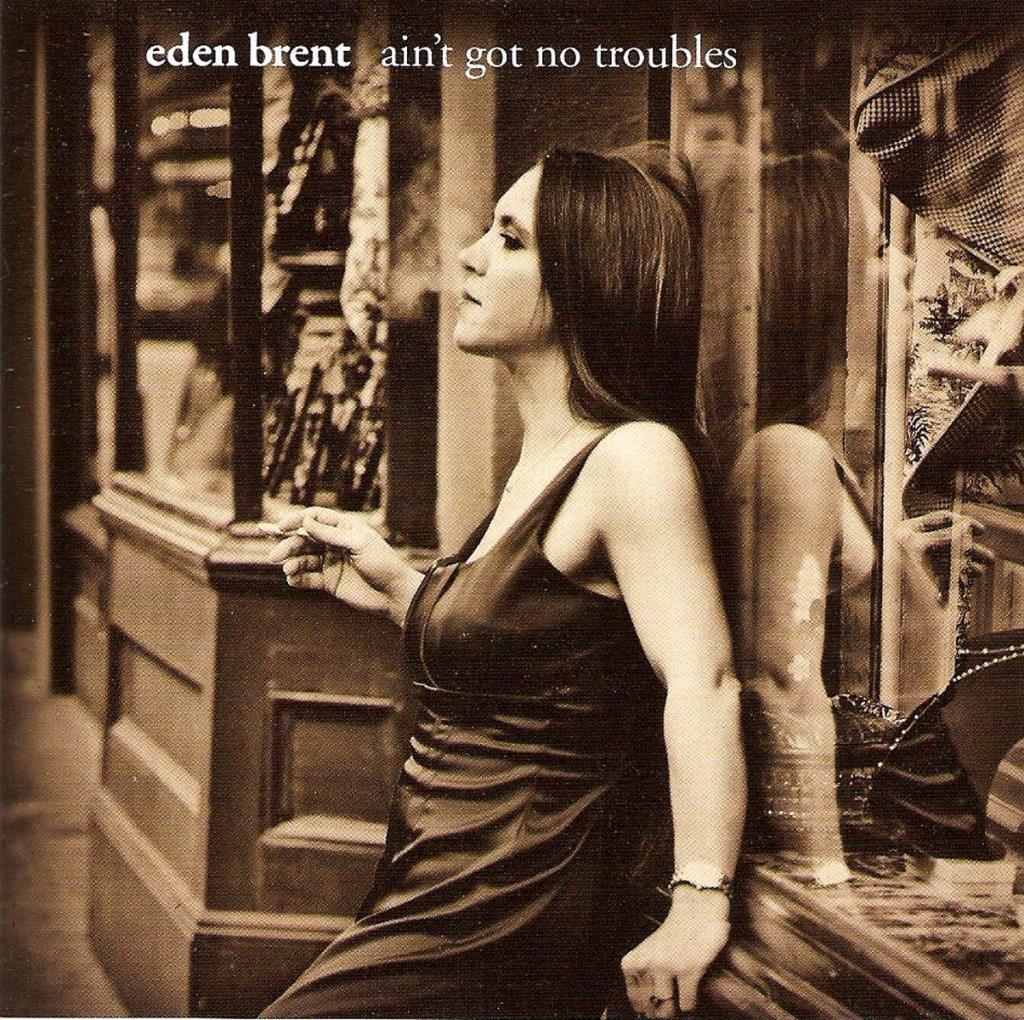 We’ll just jump in where we left off, with Eden talking about blues along the Mississippi River, songwriting inspirations, and the wonderful recording session down in New Orleans that lead to her latest album, Ain’t Got No Trouble. If you missed the first part of the interview, you can find it here!

“In Love With Your Wallet,” I wrote that about a relationship my dad is having with this woman and the thing is, that is also kind of a universal thing. The “May to September” romance where it’s a younger lady with an older man and she’s good lookin’ and he wants somebody beautiful and sexy and he’s older and established and got money to pay her bills and she’s looking at him for that. In other words, two people who partner for probably less-than-noble reasons. And as a matter of fact, that woman, she’s bent out of shape about the tune. She’s not spoken to me since the record came out; since she heard the song.

How do you feel about that?

Well, the way I feel about that is that I wrote the song and so I wasn’t going to not put it on the record. I did put it second to last, so perhaps maybe she wouldn’t pay attention when it came up. So I thought maybe she, like I said, she’s sexy and beautiful. I asked my daddy “why’d you start goin’ with this girl? I mean, jeez, daddy I mean really! Do you have to have a girlfriend that’s my age?!” And he looked at me and got a big grin on his face and says “well, baby I couldn’t find anybody younger!” But she is sexy, but she ain’t the brightest bulb on the Christmas tree. I thought she might not even get it, but apparently shes slightly smarter than I give her credit for. Then she got huffy about it. Surely it’s not my habit nor is it my pleasure to hurt peoples feelings. The whole reason for being an entertainer was to move people; to provide some sort of catharsis when they need it, and to lift them up and make them feeling better for a minute; to make then forget their own troubles for a minute… so they can suffer through mine with me! Seriously, though, I would never attempt to hurt somebody’s feelings, but it occurred to me that a) she would not notice the song, and b) she would be delighted that she inspired a song.
I think it’s kind of cool! Little Joe McLerran wrote a song on his next-to-last album, the one were he won “Best Self-Produced CD” at the International Blues Challenge last year. He has a song on that CD called “Cocktails For Two” that’s about me! I know that because he mentions Greenville, Mississippi and he doesn’t know anybody else in Greenville, Mississippi! …and because he told me he wrote it for me! And it’s called that and I guess I could’ve got bent out of shape because he’s practically calling me a lush because I make the best cocktails in town, but I truly didn’t mean to hurt her feelings. I probably would’ve done it anyways, but I truly did not mean to hurt her feelings. I thought she would be delighted and I’m not entirely convinced that she’s secretly not delighted!

You mentioned that you did the CD down in New Orleans. Now I know you played with a bunch of ridiculous New Orleans cats, John Cleary and George Porter, etc. Colin played some slide on that. What did all these things do to the sound on your album Ain’t Got No Troubles this time?

When I wrote Ain’t Got No Trouble, I intentionally tried to give it that “second line” feel; we’re marching down the street, after we’ve done the funeral, after we’ve already done “Just A Closer Walk With Thee” and we jump into “When The Saints Go Marching In.” I tried to give it that kind of feel, and naturally, the New Orleans players, particularly the horn section, and I was not familiar with the horn players but they just did a superb job. they really gave it that flavor. When I listen to that song now, I can just see a bunch of people marchin’ down the street grinnin’ and spinnin’ and havin a good time. The horns build and build and build. It’s kind of a long song. When I’m writing a song, I don’t know how long the song’s going to last until I put it all together! Sometimes I talk a little more than necessary. “Ain’t Got No Trouble” is a little bit more than 5 minutes, which, sadly, makes it less accessible to radio, because generally, radio folks wanna play something less than 5 minutes. It has something to do with the amount of money if they play something longer than 5 minutes. Which is probably why Jazz is not any more popular than it is!!! Hell, the Jazz solo usually lasts more than 5 minutes!

Anyhow, and so on “Leave Me Alone”, I had written a bridge to that song, but the song had gotten the point across, and my dad is a huge huge Hank Williams fan. And if there’s anything I’ve learned from listening to Hank; simple is better. So I left out the bridge and instead Colin plays a beautiful solo over the bridge. And the horn section on “Ain’t Got No Trouble” builds, and by the end of the tune it’s really like you can almost picture a band that’s set up, like say in Preservation Hall, has started to play a tune, and by the end of it they’ve jumped up out of their seats and they’re marching down the street! It was a lot of fun to record and a whole lot of fun to listen to the finished product. this was the most enjoyable recording experience I’ve ever had because Colin did such a great job of leading, and I was simply able to follow. He gave such great direction, and I think somehow intuitively, he knew the sound that would be right for this album. He certainly delivered. It’s the most honest thing I’ve ever recorded. The very first time I heard it, the thing that overwhelmed me is that it sounded like I was sitting in my own living room listening to me sitting right across from me. And it just sounds very honest and real. Theres mistakes there… there’s just nothing phony about it anywhere on the record. It really shows the frailty of performance and of life. It’s not striving for perfection, yet in it’s own imperfection it’s perfect. And he’s the one who’s responsible for providing that sound and putting it in me.
Colin did a beautiful solo in “Beyond My Broken Dreams”. I do a lot of cover songs. I’m not a prolific writer. Songwriting is a craft like anything else. “Beyond My Broken Dreams” were written by bona-fide songwriters in Nashville. One’s a mother-daughter team, and the other’s a friend of mine from Mississippi named Tommy Polk, who’s lived in Nashville for more than 20 years and has several BMI awards and has, you know, achieved gold records and this kind of stuff. So I was looking around for other material and Tommy Polk sent me several ideas, and that tune had never been recorded by anybody except for those folks that recorded the demo. The demo itself was really quite good, so it was a challenge trying to make something new. (If I’d have heard that on an album, I never would have thought “oh that’s just a demo.”) When they do a demo in Nashville, they’re serious about it! Because they’re trying to sell the songs to somebody big. So it has to sound really professional, so people take the song seriously. And we’re in the studio and I played the recording of the song, and said “Hey, I wanna do something different with this!” George kind of came up with the groove that has a little bit more of a lilt. It’s more “swampy” than the demo, which had more straight 8th notes.
There was no point in me rehashing what the brilliant artists did on that demo. So George Porter, Jr. came up with that groove, and he did a great job. His feeling of it, his presentation of the rhythm, it spoke to me a little more than a straighter version would have. I would never make it as a country star!

With a Mississippi accent? I think you could probably make it!

I dunno! If it was just blues, it’s Mississippi too. A lot of people could talk about Chicago blues, and I love Chicago blues, but the fact of the matter is that the reason I love Chicago blues, and the reason that everybody else loves the Chicago blues, is that the Chicago blues sound was established by people from Mississippi! I mean, every damn one of them that established that “Chicago blues sound” was from Mississippi. That ain’t no damn joke! And it’s interesting to note that a lot of the Memphis players would have been from Mississippi, but by the time they got that far north, the sound had evolved from something else, so all along the Missisisppi waterways you have wonderful musical cities, Kansas City and Saint Louis and Memphis, and from here I could get all the way to Chicago traveling the waterways, and New Orleans too. All of these wonderful musical cities have their own flavor. And it pays to notice the difference because it would’ve been the towns that people most often played in. and those players obviously would’ve exchanged ideas.
…And all that was to say that Colin Lindon did a beautiful job of playing a solo on that tune too. That’s prolly one of my favorite tunes on the record.