How Did Ke$ha End up on a Blues Website? 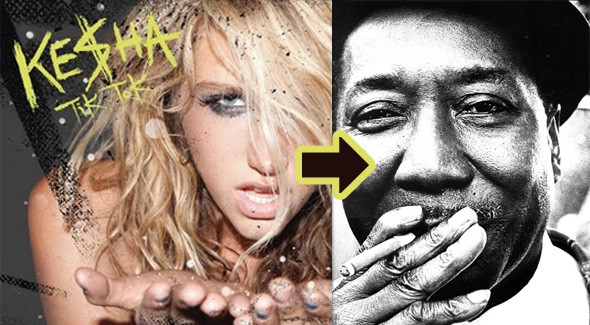 We’re not above relating current pop to it’s Blues influences, no matter how much us blues fans dislike (or loathe or some harsher word) today’s pop. It’s worth noting and appreciating the far reach that the Blues has had on modern music!

That said, this one’s a whopper! Let’s lighten up this hump day with a comical yet insightful thought on Muddy Waters’ and The Rolling Stones’ relation to a little pop starlet called Ke$ha. This article came about last February, and, honestly, the reworked MP3 cover isn’t bad!

Last week, Fenzel wrote a thoughtful analysis of the song “Tik Tok” by Ke$ha. In the resulting discussion in the comments, OTI reader “Brimstone” had this to say about how the song furthers Ke$ha’s image as a “skank”:

I don’t listen to much modern pop but I’ve been a rock fan for ages, and male fans ‘glamorizing self-destructive behavior’ goes back as far as the blues, if beyond. The author of this piece is right – she’s doing the rock star persona thing, which ties into the Mick Jagger line. And that’s cool! Guys have been writing songs like this for decades… Nothing wrong with a girl doing it.

Brilliant observation, Brimstone. And to further illustrate your point, I’ve taken the liberty of re-recording a bit of “Tik Tok”…

Try listening to it. Thematically, it makes sense (well, except for the pedicure part) and isn’t nearly as weird as the picture above suggests.

More tellingly, the sum total isn’t that far removed from a Muddy Waters tune along the lines of “Hootchie Coochie Man”…

Readers: what do you think of this unholy combination? Have you gained a new appreciation for Ke$ha? Or did I only succeed in sending Muddy Waters spinning in his grave? Sound off in the comments!