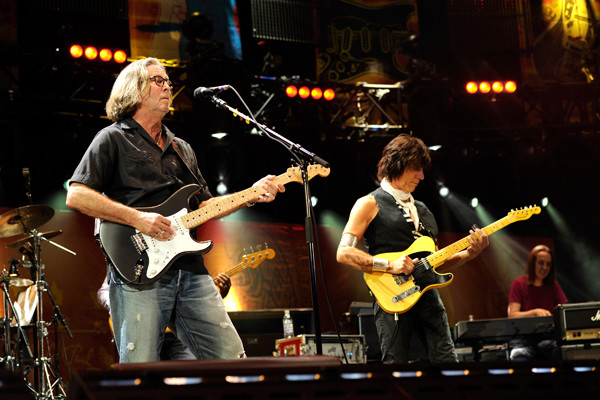 Tomorrow, Eric Clapton will be auctioning off over 70 guitars and dozens of amplifiers from his personal collection to aide his charity, a recovery and rehabilitation group called Crossroads Centre. The auction will be held at Bonhams in New York. According to Carey Wallace of Wallace & Hodgson, which organized the auction, “This sale is much more for the fans. There are affordable guitars, affordable amps.” Clapton has held two auctions in the past that raked in over ten million dollars, and bidding on many items drove their prices up to extremely prohibitive levels. This auction, however, places most item’s expected sale prices between roughly $5,000 and $30,000, and the auction is expected to take in $600,000, all of which will be going to benefit the Crossroads Centre in Antigua.  Clapton, a recovered heroine addict and alcoholic, founded the non-for-profit in 1998.

Among the beautiful guitars are a black Fender Stratocaster, custom built for Eric,  a St. Blues guitar from Memphis, a 1948 Gibson L-5P, a 1957 Fender Twin amp and many others.  An exact replica of Clapton’s famed “Blackie” will be on the auction block as well. The real Blackie sold for $959,000 seven years ago. There are also a limited number of unique items being sold; a three piece stage suit made by Gianni Versace and worn by Eric and a gold record plaque given to Eric for his 1989 “Journeyman” album.