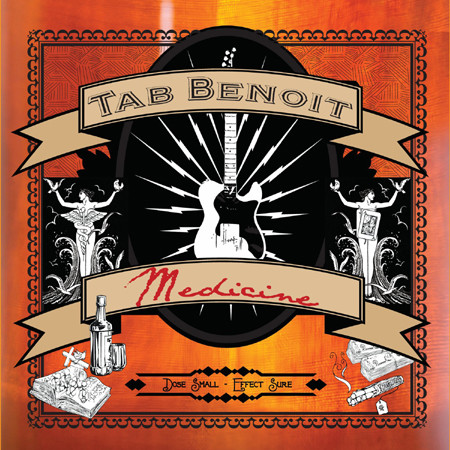 Tab Benoit is the wildly popular musician who hails from Houma, Louisiana. His distinct cajunified blues and soul have been winning fiercely loyal fans for decades now. A simple listen to any one of his many popular CDs, or a visit to a live show will make a loyal fan out of anyone. Benoit’s latest album, Medicine (Telarc), is due out April 26th, and is a fantastic, powerful addition to Tab’s already robust repertoire.

The album fires out of the gate with a punchy, menacing guitar riff; the beginning of the title track.”Bring me my medicine”, growls Tab with his trademark Louisiana drawl and soulful vocals. Of course, in Tab’s signature style, the album is laced with heavy blues, soul, and Cajun influences. “Sunrise” is a heartfelt soul tune that would have been as home at Stax Records as it is deep in Tab’s bayou style. Several tracks have an autobiographical feel, which is nothing new for Benoit. “In It To Win It” is a great rock-style number about making his own way in the world, and “A Whole Lotta Soul” defines Benoit’s heartfelt pain at the decimation of the gulf Wetlands. More on that later.

It is either coincidental timing or fate that this review comes the day before the first anniversary of the catastrophic BP oil spill in the gulf coast. Tab Benoit has been one of the most forward-facing and staunch advocates of the rapidly vanishing Louisiana wetlands in the world. Tab began Voice of the Wetlands, a non-for-profit organization to advocate, educate and preserve the wetlands, in 2004. Benoit has a thing or two to say about the “bleeding heart of the bayou” on Medicine in his song “A Whole Lotta Soul”, where he dares us to level the mountains, drain the seas, and wash away the deserts and see if we’re still fine with losing our national landscape. It’s a poignant, fantastic song, and a welcome message that’s in dire need of spreading.

Overall, this is some of Tab’s finest work. He lets loose on his defining vocals in this album, and packs every track with energy. The powerhouse Louisianian band doesn’t miss a beat, and Benoit’s guitar work is some of the finest yet. Seven of the eleven tracks are original numbers co-written by Anders Osborne and Tab Benoit. The duo also co-produced the album, recorded at Dockside Studio in Maurice, Louisiana. For Tab Benoit, this may well be a defining album in his illustrious career.

Support Voice of the Wetlands