Hellhound on My Ale: Good Beer & the Marketing of Robert Johnson

Robert Johnson’s 100th birthday on May 8, 2011 brought with it a flood of products paying tribute to, taking advantage of, or otherwise attempting to capitalize on Johnson’s unique legacy. It’s completely unimaginable that any other blues musician who recorded in the 30’s could have this kind of impact on today’s culture. Many of the new Johnson products aren’t worth the time it takes to look at them: incredibly overpriced repackaged versions of the same music, rock band tributes, an endless variety of t-shirts. But when I saw Hellhound on My Ale from the Delaware-based Dogfish Head Brewery, I knew I had to check it out. They’ve also created a website just for the limited edition brew.

Dogfish makes great beers. Their 90-minute IPA is one of the best regularly produced beers I’ve ever tasted. This isn’t their first musically-inspired beer. Last year’s tribute to jazz great Miles Davis was called Bitches’ Brew. Hellhound is an incredibly hoppy ale flavored with lemons. It’s only available in 24 ounce bottles. The bottle states the lemon is “a shout out to Robert Johnson’s mentor Blind Lemon Jefferson.” Well… close enough. Johnson certainly listened to a lot of his records and it’s nice that Blind Lemon gets a mention. Though the better choice for inspiration might have been the classic line from Traveling Riverside Blues, “you can squeeze my lemons til the juice runs down my leg.” You can taste the lemon in the beer, but it’s not overwhelming. The alcohol is also subtle despite 10% alcohol by volume.

So what is it about Robert Johnson that inspires these products? Of course, the devil legend plays a huge part. It’s a great story. As it was when it was about Paganini or Faust (maybe not so good when it starred Ralph Macchio). Plenty of people that may never have even heard Johnson’s music know the story that he sold his soul at the crossroads. But that same story has been applied to plenty of others (in music and other fields) who haven’t entered the popular imagination the way Johnson’s story has.  The same story was told about Tommy Johnson by his brother. But only avid pre-war blues fans know his music. Tommy Johnson was great, his songs dealing with alcohol abuse and the trials of life are incredibly haunting in their own way. But his rough voice and guitar-style are probably less accessible to the modern listener than Robert Johnson’s.

The  beer’s label art has a cartoon image of Johnson and his trailing hound. The devil tale and the great song Hellhound on My Trail together gave someone the idea to create this specific beer. The same combination of legend and music created Johnson’s reputation. After the legend captures their attention, his music inspires people. In particular, it inspired the right people. People such as record mogul John Hammond, jazz record collectors and writers of the 40s and 50s like Sam Charters, and then rock stars of the 60s like Eric Clapton and Keith Richards. The people that became taste makers loved Robert Johnson and publicized his music in a way that never quite happened for bluesmen such as Son House, Skip James, or Leroy Carr. So now Johnson’s name sells — both his music and other products. It came together in a way that created a Robert Johnson brand that no intentional marketing plan could ever have achieved.

Sometimes Robert Johnson as marketing device grows annoying. Particularly because it always seems to come with hyperbolic claims about his influence. “Most influential bluesman of all time” seems to be a common phrase. Dogfish Head publicity writes Johnson “changed music forever.” Maybe. Certainly when considering his music on its own terms. People will still be listening to his songs for the foreseeable future. But influence is hard to measure. Johnson wasn’t even all that popular in his own day and I suspect Chicago blues, R&B, and rock and roll all would have developed the same way with or without Johnson. Have more guitar players tried to sound like Johnson or, say, B.B. King?  I suspect it’s King by quite a lot.

But when you considering how good his music is, there’s no reason to dwell on those who overstate his influence and the silliness of some of the marketing of his name and legend. Though he’s better known than some other blues musicians who may be equally deserving, his continuing popularity does nothing but bring the occasional new listener to Charley Patton or Son House. The Robert Johnson of popular culture in the 21st century is a good thing. It means people will continue to be exposed to great music. Hellhound on My Trail is an absolutely brilliant song. Hellhound on My Ale is a really good beer.  If Robert Johnson continues to inspire good products, I’ll try them. 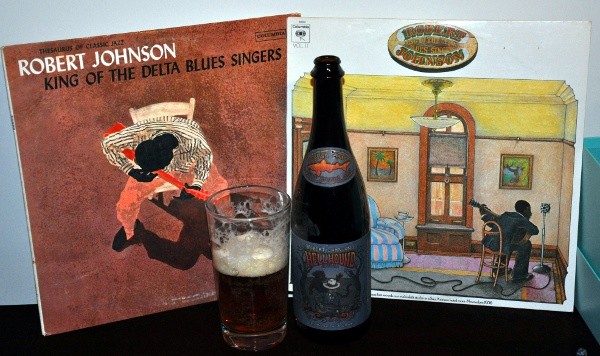