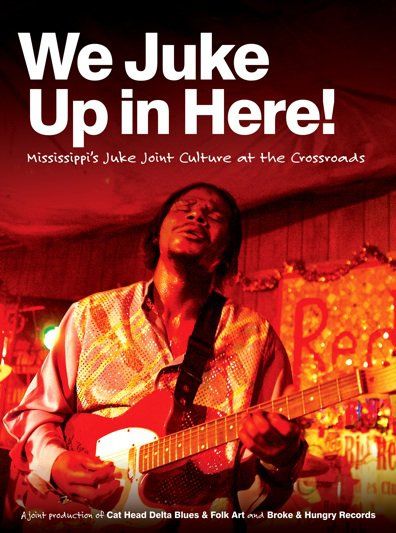 Pre-orders, sponsorship opportunities available for “We Juke Up In Here”

(CLARKSDALE, MS) – The creative team behind the award-winning 2008 blues movie M For Mississippi have reunited for a new film celebrating the Delta’s down-home blues tradition. The new film, We Juke Up In Here: Mississippi’s Juke Joint Culture at the Crossroads, is slated for an April 2012 release but is now available for pre-order at the film’s official web site: www.wejukeupinhere.com.

We Juke Up In Here follows producers Jeff Konkel of Broke & Hungry Records and Roger Stolle of Cat Head Delta Blues & Folk Art as they explore what remains of Mississippi’s once-thriving juke joint culture. The film is told largely from the vantage point of Red Paden, proprietor of the legendary Red’s Lounge in historic Clarksdale, Mississippi. Paden, a true Delta character and jack-of-all-trades, has been running his blues and beer joint for more than 30 years – providing one of the region’s most reliable live blues venues and an authentic stage for a cavalcade of veteran blues performers, both legendary and obscure.

Told through live music performances, character-driven interviews and rare on-camera blues experiences, viewers will be taken below the surface of the quasi-legal world of real Delta jukes while it’s still living and breathing.

The project reunites Konkel and Stolle with cinematographer Damien Blaylock and sound engineer Bill Abel who were instrumental in the success of the earlier film, M For Mississippi. Rounding out the production team is Lou Bopp who is providing both video and still photography.

We Juke Up In Here will be released as a deluxe box set featuring a DVD, a CD soundtrack and a glossy pullout booklet with multiple essays, notes and color photos. The DVD will include the feature-length documentary along with a treasure trove of bonus features including unreleased scenes, production stills, a promotional trailer, closed captioning, French and Italian subtitles and more. The DVD will be region-free and playable on DVD players worldwide. The box set will retail for $25 (US).

Customers who pre-order the film will receive the product weeks before its official release and will pay no shipping fee.

Pre-orders also provide the filmmakers with access to additional cash resources during the movie’s crucial production phase. “The early support of blues fans and documentary lovers allows us to make an even better film,” Konkel said. “Pre-order dollars enable us to involve even more blues artists in the movie and to incorporate additional shoots into our production schedule.”

The filmmakers also are benefiting from the invaluable financial support of several marketing sponsors.

The filmmakers’ principal sponsor and European partner is the Rootsway Roots & Blues Association (www.rootsandblues.org), a nonprofit organization from Parma, Italy. Founded in 2004, the group is dedicated to promoting rural and indigenous American and African-American musical art forms throughout northern Italy. Rootsway has brought several Mississippi blues performers to Italy in recent years.

– Lemuria Books, a Jackson, Mississippi-based institution and one of the finest independent bookstores in America. Lemuria houses thousands of literary titles and an impressive selection of Mississippi blues CDs (www.lemuriabooks.com).

“It’s no exaggeration to say that we simply couldn’t make this movie without the generous contribution of our sponsors,” Stolle said. “We’re incredibly grateful to the many individuals and organizations around the world who recognize the importance of Mississippi’s amazing blues heritage through their support of projects like this.”

Additional sponsorship opportunities remain for We Juke Up In Here. The film’s producers have developed numerous sponsorship levels, each with a corresponding marketing and product premiums. To inquire about sponsorships, e-mail the filmmakers at [email protected]

We Juke Up In Here is a joint production of Cat Head Delta Blues & Folk Art and Broke & Hungry Records.