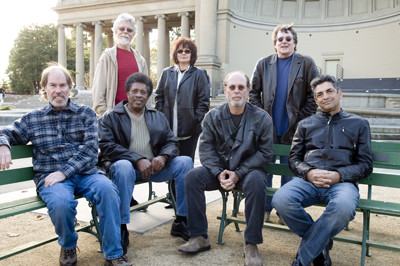 “We thank you so much for all you have done,” was the tearful response given by Shauna Drayson-Hayward.  The gaunt, thin figure of RICHIE HAYWARD, legendary drummer for LITTLE FEAT, stood beside his wife. “Thank you”, was all Richie could muster, his voice cracking with emotion, his head lowered.  His wife stepped forward on the stage to express their thanks to the over 400 fans and musicians who packed the Florence Filberg Centre, in Courtney, B.C, on Vancouver Island.  “We can feel the love in the room,” Shauna continued.  “You have made a positive difference in our lives and we are so grateful.”  As a roar of approval burst from the crowd, Ritchie lovingly extended his right hand to caress Shauna’s hair.  They then stepped back and quietly made their way from the stage.

The occasion was a benefit organized by a number of friends of the couple led by the band PACIFIC DISTURBANCE and JERRY DOUCETTE, as headline acts. Mr. Hayward, long-time drummer for LITTLE FEAT; was suffering from liver cancer and was in need of medical care and a possible liver transplant.  Without health insurance and no retirement plan (always a musicians’ dilemma), he needed money so that a compatible donor could be found.

Tables lined the back and sidewalls of the Florence Filberg Centre full of items for the silent auction.  All of the objects or services donated by suppliers, manufactures of music gear, fellow musicians, and fans both local and worldwide were in an effort to raise dollars for Richie’s care.

The day was filled with music.  Performers from all over Vancouver Island and the British Columbia mainland flocked to Courtney to pay tribute to a man who has both inspired and mentored not only many notable drummers, but all musicians throughout the globe.  In interviewing several such accomplished drummers Richie’s name always comes up.

The venue was hopping with activity all day long as various bands entertained the audience.  People mingled around the auction tables. Checking the assortment of items was like taking a trip down memory lane.  Collector posters, from a number of dates played by LITTLE FEAT and other famous bands, snare drums, autographed framed promotional posters, logo bar fridge, CD’s were all displayed and neatly arranged with appropriate descriptions printed on sheets of paper, along with bidding prices and secured to the tables before each item.  Spaces for lists of names and phone numbers were written on each sheet noting the price bid for each specific item.

At 9:30 P.M. JERRY DOUCETTE, accompanied by the host band PACIFIC DISTURBANCE, took the stage.  The dance floor filled with happy revellers.  Doucette was in excellent form, sounding just as strong as in the days of “Momma, Let Him Play” fame (1977).  It was a total love-in when Jerry welcomed Richie to sit in.  Immediately, the energy intensified as Jerry and Richie led the band through “Two Dollar Bill”, “Sweet Home Chicago”, and “Crossroads”.  Sparks flew from both musicians fingers as the excited crowd strained forward to watch their heroes set the groove.  It was a hold-your-breath fifteen minutes as all watched Ritchie drive the tunes home.  The vibrant playing that we are all familiar with returned.  Showing strong, fluid technique and great feel, the master on the drum kit soaked up the love that surged toward him.

We all wished the Hayward family strength, courage, and a recovery for Richie so that he would be able to return once again to his legend drum chair. It was a very special performance that I felt honored to attend.  Sadly, in less than a year from that hot August night on the West Coast of Canada, the world would lose a mega-star in popular music of our generation.  At the age of 64, Richie Hayward, would slip from our grasp to join that “heavenly band” in the Great Hereafter.

Thank you, Richie, for all the marvellous music you created not just with LITTLE FEAT, but also as a consummate session musician with many headliners of our day.  Thank you for the joy, the laughter, the incredible boogie that made us dance and inspired others to follow the drum patterns that became the GOLD STANDARD.  We will miss you, and smile fondly, whenever one of your tunes is played.  Thank you, rest now; you earned it.