Musings of an Anonymous Musician – Part 1

This is the first entry in our new limited series, Musings of an Anonymous Musician, chronicling the struggles and satisfactions experienced by a working musician who’s life making music reflects many of his working peers, united both by their mutual love of creating music — and the consequences that brings, both good and bad. No, we won’t tell you who he is. 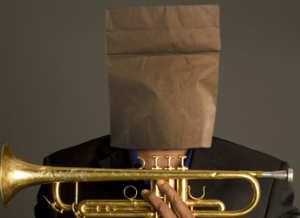 Hi. I’m what you’d call a working musician. I create music in order to pay my bills. Sometimes I have trouble doing that, but I still love my job more than any person ever should. That’s why I spend countless hours a week practicing it. I don’t have a lot of delusions about becoming an enormous success, loved (or loathed) by everyone in the country, driving fancy cars and selling millions of CDs just because people know my name and I wear ridiculous clothing.  Some of the artists I’ve known in my life (who, at times, didn’t have a pot to piss in) have made more amazing music than ten pop starlets put together could ever hope to achieve with a whole army of little helpers. Some of them have been well-recognized and have enjoyed the modest successes that they more than deserved; others have died nearly forgotten.  Those are the waters, I guess.

Being a working musician sometimes puts you just a notch above the homeless …or a notch below depending on who you ask!! I’ve had my instruments stolen, been robbed of what little money I had after a gig, been cheated out of my pay, been punched, looked down on, yelled at, and I’ve had to dodge beer bottles while on stage. I appreciate the tips, guys, but I’d like them in the form of green paper, not 5 cent deposits. While I’m playing, people usually love the music. When I’m not, it sometimes feels like I’m on the wrong side of open season. I don’t know why we get the extra-harsh treatment. I have a few theories though. It could be that we’re occasionally playing in areas that tend to attract some amount of crime. It’s not exactly ideal, and no, it’s not always our first choice. But if I sit around waiting for my call from Madison Square Garden, I’m going to get real hungry real quick. Gigs aren’t the easiest thing to come by so we have to take ’em where we get ’em, be it a bar mitzvah or a dive bar. We could also be treated like crap because people don’t like the fact that we don’t have “real” jobs. Well, how much do most people like their jobs? Most folks I know hate them. I love my job. I get to create something that makes people happy all the time. And I think that’s part of it. In a weird way, maybe they’re jealous that we get to do that. A “be free” sort of deal.

Don’t get me wrong, I’m not complaining — just musing. The pay can low, the crowd can be harsh, the walks can be long, the crime can be bad, but there’s a reason I still do it every. single. day. Making good music is the one redeeming feature the good Lord saw fit to bless me with, and I’ll continue to work at it and try to share it with people as long as it’s possible for me to do so.