Cedric Burnside sits in on the Back Porch

We sat down with Cedric Burnside. Already something of a blues legend in his own rite, his grandfather was the great R.L. Burnside, a titan in the blues. Cedric is a magnificent, energetic, suave individual, both on stage and in person. His driving style and deep love and devotion for his craft are a model for anybody who wants to see someone truly in love with what they do. We spoke with Burnside about his many talents, his budding new business, playing with Samuel L. Jackson, and, of course, coming up learning the blues with one of the greatest bluesmen in the world; his grandfather. 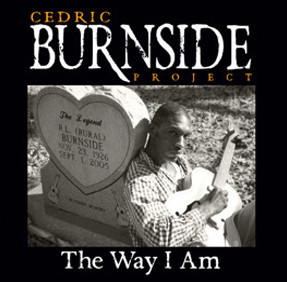 I got a bunch of questions for you, and by the way, we caught your drumming earlier with a gal who was playing on the Emerging stage. Your drumming, as always, is awesome to watch, and she was fantastic!

So your grandfather’s R.L. Burnside. People ought to know that. And you are a hell of a drummer. You’ve been making a name for yourself for a long time. When did you start?

I thank him for everything, man. I started out drumming when I was about 6, 7 years old jut on the front porch. My granddaddy used to have house parties and used to invite a lot of his friends over and they just drank a bunch of moonshine and beer and rock out, you know? And watching my daddy — my daddy’s a drummer, [cabin jackson] and I used to watch him play drums on the front porch and I loved it. I said man, I got to do that!” it was in my mind! Then one day, I just built up the courage to get up there and get on ’em. It didn’t matter if I could play them good or not… breaking the ice was just gettin’ up there. And I’ve been doing it ever since.

So what about your grandfather’s influence on you? I know you played with him some?

Well, I can say, man that he was an amazing man. I loved him from the top of his head to the bottom of his feet, you know? And he taught me a lot about the world, not just about music. He taught me how to pack my bags and put little knick-knacks in it in case you got somewhere late at night and you don’t have any place to eat at. You can grab you a few snacks out of your bag, you know? Just being a teenager.

I went on my first tour with my grandad when I was thirteen years old. We did a club in Toronto, Canada. I forget the name of the venue but that’s just that start made me the happiest teenager in the world. That’s something I always wanted to do. I’ve been with him ever since. I got a chance to do a couple of juke joint caravans with Junior Kimbrough and my dad and T-Model Ford, Paul [wine] Jones? I got a chance to see a lot,do a lot in a small little time.  So I just thank him and God for everything. R.L. Burnside and God… they made me.

I don’t want to focus on your granddad, because you’ve made a career yourself just out of having your unique sound and style. Which is what attracted some big folks to you, I understand. Tell me about your time with Samuel L. Jackson?

Oh man that was awesome! We were doing the movie Black Snake Moan. First of all, I never thought I would  get the chance to meet Samuel L. Jackson. He’s one of my favorite actors, you know? And my record label at the time, Fat Possum, called me one day and was like “man, how would like to be in a movie with Samuel L. Jackson?” and of course, I thought they was bullshitting with me, and I said “man, stop bullshittin’!” They said “no, no, we’re going to call you back in a couple of days here once we get all of the details worked out.  So they called me and said “man, we need you to meet us tomorrow.” We met in Oxford, Mississippi at this little small restaurant, I forget the name of it. When I found out they were serious I was was like “wow! I’m going to meet Samuel L. Jackson.” So when I got in there, Samuel was sitting there and his bodyguard was sitting there, and it was just like, unbelievable. Like a dream. So we had to sit in a studio that Fat Possum had at one time, and we all sat in the studio and Kenny Brown showed him a few licks on the guitar. He could NOT play guitar at all. He had never picked up a guitar in his life. He’d never tried to sing any music before in his life. So he did all of this within a 2-3 month period. Learned all of it. It was an awesome time, man.

And y’all were on the sound track weren’t you? Didn’t you have some hand in making it?

It’s a great soundtrack. In fact, I still listen to it! And you were in the movie, weren’t you?

Yeah, I was! I did the juke joint scene, and it was great. I enjoyed every minute of it. But my time with Samuel L. Jackson was awesome. He was about the most laid back guy that I’d ever met, you know? And sometimes when you meet movie stars, they try to be up here but he was totally different. It was like I knew him all my life or something, like one of my uncles or something.

Tell me about your sound. You drum. tell us what else you do, musically. I know you’re a multi-talented guy.

I play some guitar. I have been playing guitar. I write my own songs. I recorded a CD the earlier part of this year between March and April that came out. I did this one on my own. It’s called The Way I Am. I wrote all of the songs except for one, called “Mellow Peaches”. My grandfather used to play that song a lot. I used to love to hear him play it so I had to cover that on my CD.

But I started my own Business called LCB Records. I started out with record companies. I’ve been with three of them, and with all three of them – you don’t make too much money with the record companies. So all three of them kind of messed me up a bit, you know? Didn’t give me my royalties like I was supposed to get, and I just got tied of just going back over the same old thing repeatedly. I decided that if I’m gonna do bad, I’m going to do bad all by myself! So I took everything I had in savings and put it into my own little business and actually, it’s going pretty good. And I thank God for everything. I got t-shirts, hats and stuff — I just sold out, actually! Had to reorder some. I did all that on my own. And I gotta thank god that the first time I ever opened up a business, it’s going pretty good for me, you know?

So what about the Hill Country & Delta Blues — you’re kind of this quintessential — one of a (now) very rare, very few direct links between the old delta stuff and this “blues is still alive and look, we’re kickin’ ass” way. Tell me about how you feel about that.

Well, I have to say, growing up with my grandad, mister R.L. Burnside, he played the hill country blues. And normally, when you’re around something for so long… being around him for so long you tend to do things just like him. You know? You tent to talk like him. You tend to walk like him. So me, I tend to write my music according to what I grew up with. And what I grew up with was the Hill Country Blues. And so I write a lot of my music just like Hill Country! Mostly hill country songs! When you listen to my new CD, you’ll instantly be able to tell where my style comes from. And it comes from R.L. Burnside. That’s what I’ve been around all my life! And I love all music, you know? I love all styles of blues. I love Chicago Blues, I love Texas Blues, I love Delta blues, but when it comes down to it, Hill Country Blues has just got that… It’s in my blood! It’s got that style. People have come to me and said man, “you are the reason that I’m doing what I’m doing today”, or “you helped me through some very hard times,” you know. And I was doing the blues symposium today and I told the people, “I never really understood how special and how cool this music was until I got of age. I played it and I love playing it, but I just never understood how it hit people, and how cool it was to people. But now I love this music man, and just how it makes those people feel, it makes me feel the same way. I love it, man.

You gotta love doing what you love!