Welcome to the new American Blues Scene gear column — a bi-weekly article with a unique “london-style” perspective discussing the guitar gear that make the Blues materialize into sound waves, massaging listener’s ears and, sometimes, even giving them goose bumps — or in the words of Blues Master B. B. King, “the cold sweats”. 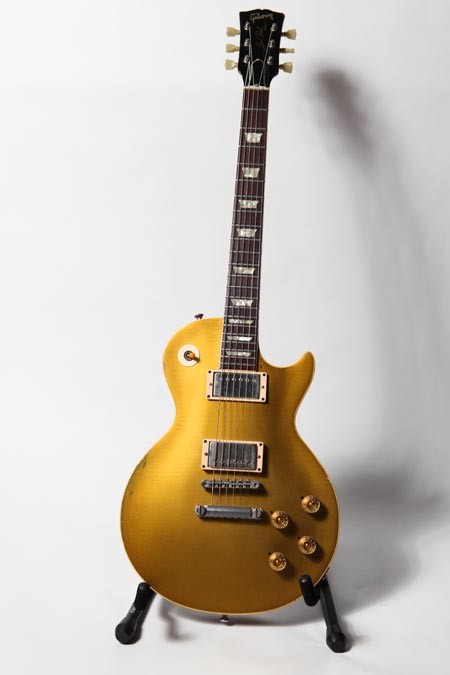 This is the first article of a series that will follow the whole electric guitar signal from beginning to end.

There is mixed opinions as to where the actual signal starts. Some believe it is in the player’s brain and/or fingertips. Surely dissertations have been written on this subject, but to avoid complication, we will start on the guitar. Obviously we cannot cover all guitars that have gone through blues. Rather, we will start from the early 50’s which is when the electric guitar gave blues music a massive boost. We have picked 5 of the most famous guitars that Blues Legends have used in the past, sounds of which can be found in virtually all of our favourite blues albums.

We will start with the Gibson Les Paul.

The Les Paul guitar was created during the 50’s, in what Gibson calls their “Golden Age”. The product was the consequence of a close cooperation between Les Paul, jazz musician and legendary inventor, and Ted McCarty who was the president of Gibson during that time.

Whilst the Gibson Les Paul was not the first solid body electric guitar in the market, (the Fender Telecaster was), this guitar became the Holy Grail for blues guitarists because of its unique tone, playability, feel, and looks.

There are many types of Les Paul models but those which are more commonly seen in the hands of the great blues guitarists are Standards and Customs. There are obviously the artists’ custom models (or those inspired by), but most customs are mainly based on these two models. The usual features are a mahogany body with a maple top, two PAF humbuckers — each with a volume and tone control, three-way switch, and tune-o-matic bridge with stopbar. The first guitars had a quite chunky mahogany neck, what Gibson calls 50’s neck. The later incantations have a slimmer neck, the 60’s neck. The thickness of the neck, the fact that it is glued in/set to the guitar’s body, and that the headstock is 17 degrees back-angled is said to add sustain and meat to the tone. There are 22 frets set in a rosewood fretboard for Standards, and an ebony fretboard for Customs.

Last decade, Gibson introduced weight-relieved Les Paul body, which is basically a chambered body. This was welcomed by those guitarists with back problems, but there are other old-school tone-purists that, even with back problems, prefer the old bodies since the new ones interestingly lack the “meaty” sound of the older ones. Our understanding is that Custom Shop Les Pauls are not chambered, simply the wood is lighter and certainly of a better quality. We suggest you try a new Gibson USA Standard and and an old one say from the 90’s. One will be able to note the difference in tone and feel — and definitely the weight difference in your gig bag!

We now cut the product of the body’s digestion and go into deeper subjects.

The electronics of the Les Paul were innovative for the era but, as some of you may know, not so versatile. However, a great feature of these guitars is their easy access to manipulate/modify the electronics. Many blues guitarist make modifications to the stock electronics. Take, for example, Jimmy Page, who had many guitars with different wirings and custom-added switches to split the humbuckers to single coils in order to achieve that out-of-phase sound. In an interview found on YouTube, Page talks about his No. 1 and describes that sound as “close to the sound of Peter Green… and also certainly BB King”. How great is that?!

Many people with new guitars go straight out and replace the pick-ups. If you are a blues guitarist with a Les Paul, you are probably trying to get a classic, flutey-smooth sound in the neck pick up and, to-an-extent, a bit nasal but balanced bite from the bridge. Playing with the volume and tone knobs may get you those sounds but if it sounds muddy and/or you are not happy with the sound, then a change of pickups will be welcomed by your ears (it is worth checking whether your stock pots will get you the best sound for your pickups).

To name some blues guitarists that use/have used Les Pauls could fill a book, but among the most prestigious are, (apart from Jimmy Page and Peter Green), Eric Clapton, Muddy Waters, Warren Haynes, Gary Moore, Billy Gibbons, Joe Bonamassa, Mike Bloomfield, Hubert Sumlin, Jeff Beck… the list goes on and on.

Finally, if you are in a tone quest, you may want to bear all of the above in mind and experiment with your current/future Les Paul. These guitars are not cheap, and it is always tricky to manipulate them if you do not know how to do it. If you are happy with your tone, fantastic. But if you are not afraid of taking a leap of faith in your tonal search, then you may want to try any of these mods.

Gustavo is a blues guitarist based in London, UK