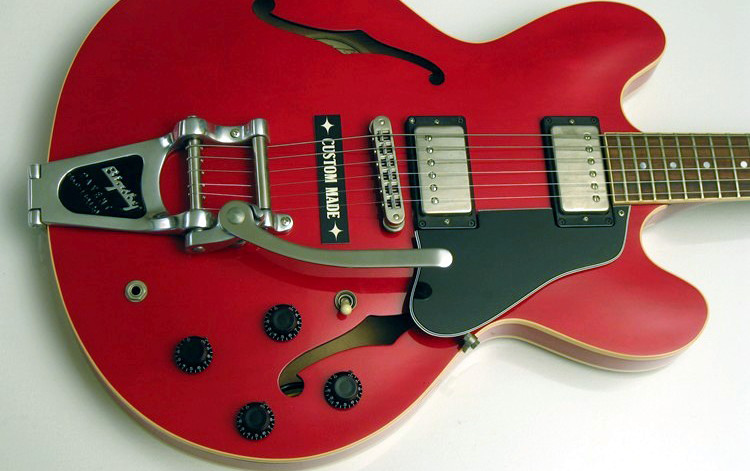 Many people who have either been in a band or are music fanatics know the term “whammy bar.” Perhaps fewer of this same crowd know what a “Bigsby” is, and that it is essentially the grandfather to all such devices that have come after it. Perhaps fewer still know that there was a single man responsible for a bit of guitar gear that many take for granted these days.

To begin with some basics, perhaps it’s best to explain just what we’re talking about here. A Bigsby is a vibrato bar, that big, hulking, gorgeous piece of metal that hangs out down at the bridge end of a guitar. The function of the Bigsby (and other similar moving tailpieces) is to enable the player to change the pitch of the strings being played. When the bar is pushed down, the movable bridge rocks forward which loosens the string tension, causing the pitch to drop. Comparatively, pulling up on the bar will tighten the string tension, thereby raising pitch. The term “vibrato” refers to raising and lowering of pitch, while “tremolo” refers to a fluctuation in volume. Even so, manufacturers often use the terms interchangeably, leading to confusion at times. For our purposes here, they will be referred to according to their technical functions.

Vibrato bars were already in use in the 40s when country musician Merle Travis was having issues with the one on his guitar. He had a friend in one Paul Bigsby, a motorcycle enthusiast who was also a music nut. Travis brought his problem to Bigsby, and Paul – who personally felt it was his mission to build anything requested of him – constructed a replacement for Travis that was a vast improvement over the previous piece. As Travis traveled and played, more musicians found out about this newfangled wonder-bar, and a legend took shape. Additionally, Bigsby would also be the man to create one of the first, if not the first solid body electric guitar, but because he was not interested in developing it, he sent the flow of interested buyers to Fender, where they, in turn, bought Telecasters, launching yet another music gear legend. (See the previous American Blues Scene article on the Tele for more info on that guitar.)

Bigsby vibrato tailpieces are easy to spot. Not only was Paul a technical craftsman, but his work was beautiful to the eye as well. A typical unit is built of thick metal stock with polished plain surfaces and often an inset of black paint from which the Bigsby name rises in polished script. The long flat vibrato arm rests atop a large spring that holds the bridge at a preset neutral position when not actuated by the player.

From one man’s mind to the hands of musicians around the world, the Bigsby vibrato has become responsible for untold millions of graceful bends, dive-bombing attack effects and subtle sweeps of tone. Lonnie Mack has been a Bigsby user for years, and it was his use of it on his tune “Wham” that is said to be responsible for the ensuing common name of the vibrato bar as the “whammy bar.” Why not take a listen and see what all the fuss was about?

Further reading may be found in the book “The Story of Paul Bigsby” by Andy Babiuk.