Blues Tools – Fender, Telecaster, and the Birth of the Solid Electric 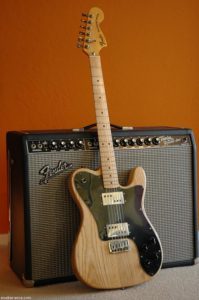 Welcome to the new gear corner of American Blues Scene, the location for equal measures of both education and entertainment regarding the tools and tackle, implements and equipment, gear and gizmos that make the music we love so much.

As this posting is the first of its kind here at American Blues Scene, it was determined that a first would be appropriate as the column’s first subject: the Fender Telecaster, the first mass-produced solid-body electric guitar.

Before the comments section begins to load up with notes of how Leo Fender did not invent the solid-body electric guitar, allow us to say just one thing: You are correct. Back in 1950, Fender was not the first to offer a solid electric guitar. Leo was not the first person to put six tuning machines on one side of the headstock. He did not create the first guitar with a bolt-on neck, either. What he did do was bring all of these elements together – along with a few of his own personal touches – creating an extremely durable piece of machinery that was affordable to produce, economic for buyers, simple to use, easy to service, and most importantly, sounded fantastic!

Fender’s magic combination for the Telecaster involved a routed body of ash or alder that was flat on both sides, making it inexpensive and quick to produce. The bolt-on neck was of maple with no overlay, the frets being pressed right into its surface, which was a new method at the time. Two single coil pickups were mounted to its surface, the neck pickup providing a bassy tone for rhythm playing, the bridge a clearer, more trebly sound for lead. (Recall that at the time the Telecaster was made there were no readily available electric basses, and it was thought that the Telecaster would sometimes be used with its rhythm pickup to pass for a bass guitar.) The bridge was a simply three-saddle affair with the strings mounted to the body through the bridge. Two control knobs and a switch allowed the user to manipulate tone and volume, and all access to the controls was done easily by unscrewing the cover plate that also served as the mounting plate.

While reception of the Telecaster was tepid at the outset (it really was an oddball when introduced), as more and more players got hold of them, appreciation for their reliability and tone grew in leaps and bounds. No small numbers of these guitars found their way into the hands of blues players. Muddy Waters used one for so long that Fender issued a version with his name on it. Albert Collins was a lifer with the Tele, presented notably on his album “Truckin’ with Albert Collins.” Roy Buchanan’s 1971 PBS documentary, “Introducing Roy Buchanan” turned on legions of guitarists to the Tele. Gatemouth Brown’s “The Original Peacock Recordings” presents the Telecaster in all its snarling, shimmering glory. Mike Bloomfield’s work on the early Paul Butterfield recordings was done with a Telecaster, and Sue Foley is seldom seen without her paisley Tele in hand.

Check out any of the fine recordings listed above for examples of just what a Telecaster can do with the blues. Additional reading can be found in Forrest White’s book “Fender the Inside Story.”