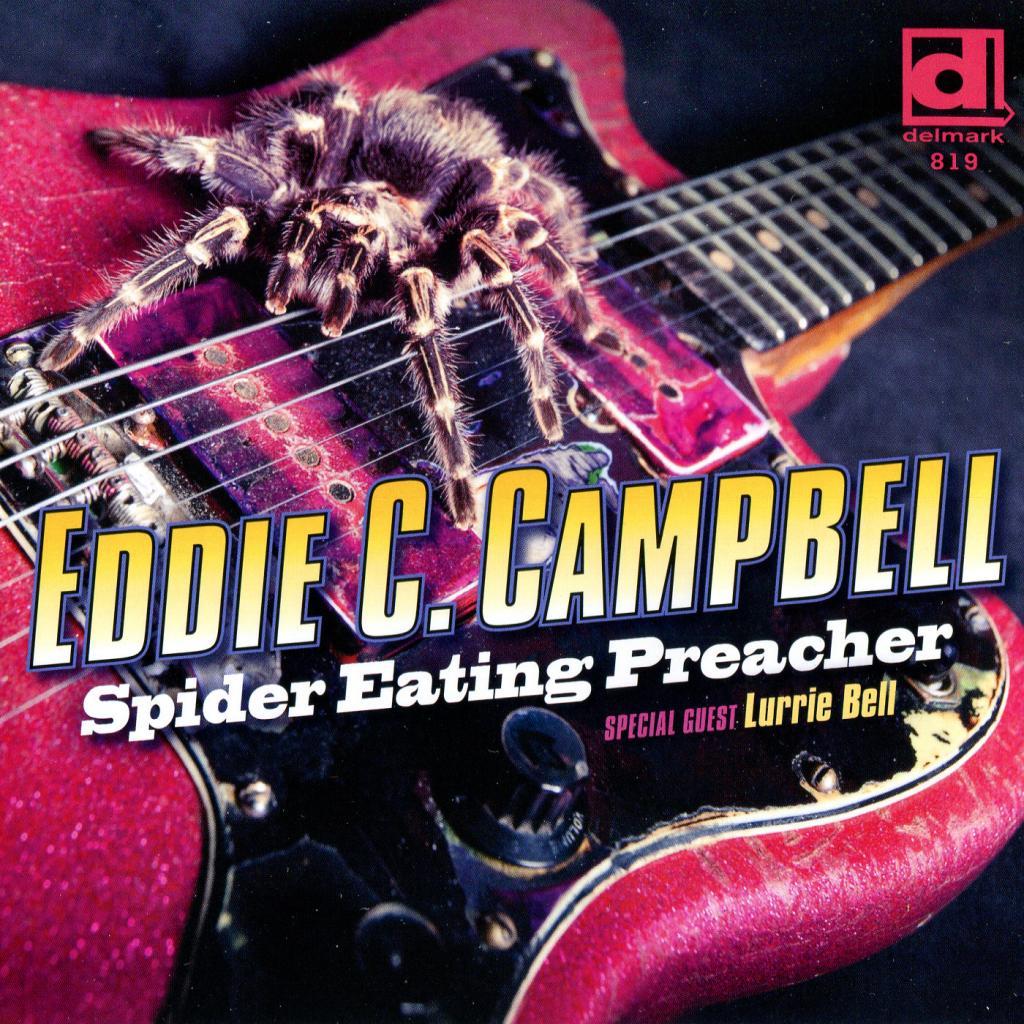 Family and history is what you get on Spider Eating Preacher, from Delmark Records. Eddie C. Campbell is a genuine expression of West side Chicago blues, and his history leaves no doubt: invited at age 12 to play at the 1125 Club by and with Muddy Waters, Eddie lived close to Magic Sam, and played the Alex Club with him, directed Jimmy Reed’s band for a while, and for four years was a member of Willie Dixon’s Chicago Blues All-Stars, to name a bit of this man’s history. Now, at age 72, he’s still making music, as 12 of the 15 songs on this album are originals, and one is a remake of one of Campbell’s first 45s (you remember those days, right?), changed enough to make it “Soup Bone (Reheated)”.  Having been born and living shortly in Mississippi, he moved to Chicago, following a blues trail walked by others. You can feel his southern roots in the not so subtle “Soup Bone (Reheated)” and “Playing Around These Blues”. Otherwise, the Mississippi to Chicago style is best implied in his own approach to playing, given that half rhythm/half lead guitar role Eddie adds to it. Throw in his own unique string use on his red Jazzmaster, and you have a very supple player to be sure!

The three covers Eddie handles here are two from former colleagues, Jimmie Lee Robinson’s “All of My Life”, a slow blues tune with a beautiful organ rhythm setting by Darryl Coutts. Another is Ricky Allen’s “Cut You A-Loose”, and the last is a remake of the Ohio Players’ “Skin Tight”. All these cuts demonstrate Eddie’s ability to add his own influences of British blues and R&B style to their inherent funk and Memphis sound.  That all septuagenarians were kicking it like this!

Which brings us around to family. Eddie really has two: one,  his extended blues family developed over the last several decades, and then his direct family.  First, there’s the Chicago blues family he belongs to, whose influences are heard throughout – Magic Sam, Otis Rush, and Jimmy Reed. He refers to his producer Dick Shurman , whom he’s known for 35 years, as his brother. Invited in was Robert Pasenko on drums, who does an excellent job of portraying the blues family history. Second, there’s his direct family. His wife and bass player Barbara Mayson, plays on six of the cuts, including the title song, which is about her blindness, according to Bill Dahl. His son David Campbell plays violin on two cuts, and his godson Lurrie Bell plays guitar, vocals, and harmonica on three different tracks, “Call My Mama”, about as straight up Chicago blues as you can get, “Starlight”,  an instrumental with a crazy good organ which sounds like a dusted off from the 50s Chicago blues tune, and “Playing Around These Blues”. Nope, not a Chicago blues number. This one is acoustic guitar and harmonica. Definitely a delta feel, and a family song.

If you want rich, historical family values musically expressed, the Spider Eating Preacher was made for you. Welcome to the house, c’mon in!