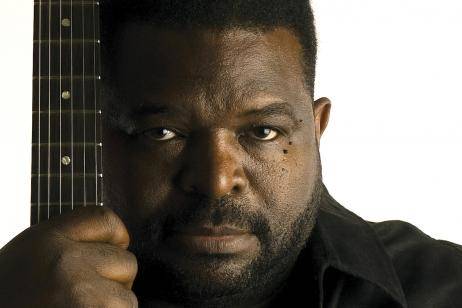 Show Of Strength, the final album from modern day blues guitar hero and vocalist, Michael “Iron Man” Burks, is set for an August 21, 2012 release. Burks had completed work on the album and was returning from a tour of Europe on May 6, 2012, when he collapsed and died while changing planes at Hartsfield-Jackson Atlanta International Airport. He was 54 years old. Show Of Strength, on which Burks wrote or co-wrote five of the CD’s twelve songs, is the album he felt would take him to the very top of the blues world.

Burks’ fiery music was driven by an intense, blue collar work ethic that won him a devoted worldwide fan base. His “Iron Man” moniker was born from his hours-long, intensely physical performances, his fearsome guitar attack and his tough, smoky vocals. It also came from the thousands of miles a year he personally logged behind the wheel of his touring van. Between his blistering guitar sound — which could at any moment become sweetly melodic — and his live charisma, Burks earned four Blues Music Award nominations, including, most recently, the 2012 nomination for Guitarist Of The Year. He won the 2004 Living Blues magazine Critics’ Award for Best Guitarist. GuitarOne named his Alligator Records debut album,Make It Rain, one of the Top 200 Greatest Guitar Recordings Of All Time. According to Living Blues, “Burks burns his own signature onto almost everything he touches…he has the ability and the imagination to fuse the best of the old and the new.”

From Show Of Strength‘s explosive opening blast, Count On You to the closing strains of Charlie Rich’s elegiacFeel Like Going Home, Burks’ signature combination of feral yet tuneful guitar work with his gritty, dynamic vocals provide a searing, emotional autobiography in blues. According to Alligator president Bruce Iglauer, “It was my decision to leave this album as we intended it, not as a memorial to a friend and bluesman gone, but as a living, breathing statement, sent straight from Michael’s heart and soul. Although Michael is not here, the music he recorded is indeed his show of his immense strength and spirit. It will live on, confirming forever his status as one of the greatest bluesmen of his generation.”

The unstoppable, heartfelt intensity that Burks brought to the stage was the very core of his appeal. His passionate music and undeniable charisma made him an overwhelming force in the blues. On Show Of Strength, Burks is captured at the absolute height of his musical powers. With taste, melodicism, and always in full command of his mighty guitar playing and soul-baring, fervent vocals, Michael “Iron Man” Burks leaves a legacy of extraordinary music, including the new Show Of Strength — a timeless statement of universal truth from a larger-than-life musician certain to become a blues legend.