The Language of the Blues: BACK DOOR MAN 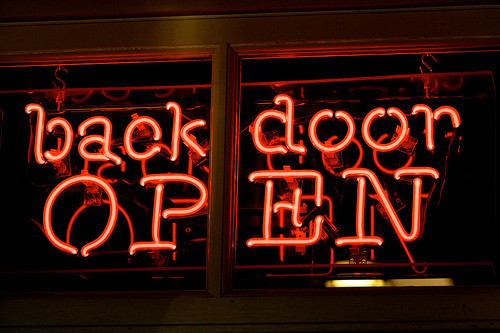 A back door man is the secret lover of a married woman. He’s scooting out the back door as the man of the house is turning his key in the front door lock.

According to Clarence Major, author of Juba to Jive: A Dictionary of African-American Slang, “The back door as an entrance/exit for blacks working in white homes during and after slavery perhaps gave the idea of the back door a great presence in the psyches of African Americans.”

The concept of the back door man as lover may also stem from the post-slavery phenomenon of the sweet back papas. These were men who dodged a lifetime of grueling manual labor–the fate of most African American men at that time–by becoming musicians and living off of women.

“These big-town blues players…” Big Bill Broonzy told William Ferris in Blues from the Delta, “They lived like a king because most of them had women cooking for some rich white man, and they lived in the servant’s house behind the white man’s house.”

The lyrics sung to musicologist Alan Lomax by musician David “Honeyboy” Edwards one sultry afternoon in Friars Point, Mississippi in 1942 spell out the story. “Here’s my toast,” Edwards said:

Willie Dixon immortalized the back door man in a song he wrote for Howlin’ Wolf, who drove “Back Door Man” home with conviction he had earned, according to Wolf’s close friend and long-time guitarist Hubert Sumlin.

“Wolf loved that song,” Sumlin said in our interview, “’cause he was one! Know what I’m talking about? Someone who’s with a married woman. The song consist of he got caught in these folks house, in this mad man’s house. Hey, the man was gone! And so he got caught and like he says in the song ‘If you see me coming out the window, I ain’t got nothing to lose.'”

“No, it’s not all of that,” Sumlin responded calmly. “I imagine some people do think that, but if you listen real good at the whole song, you would get more out of it than that. It’s about being at the bottom, running from a bad situation. Wolf, he did all this stuff. He got caught in that house and had to break out.”

According to Major, “In black culture, it [the back door] rarely refers to the anus, as it does in popular American culture.” By virtue of being white and singing to a white audience, however, Morrison gave “Back Door Man” a sexual twist–which probably gave Morrison the poet and provocateur an extra dose of satisfaction.