Bob Margolin Is Steady Rollin' on "Blues Around The World" 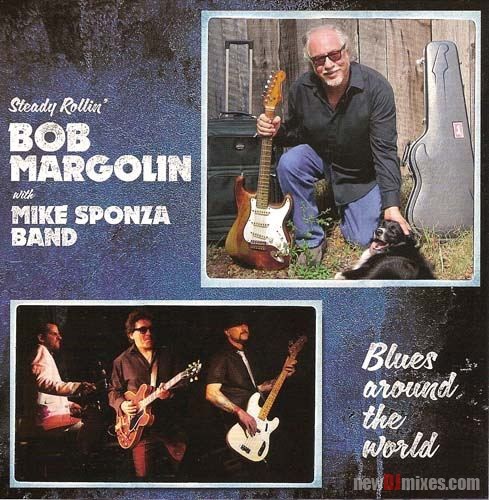 Bob Margolin has been steady rollin’ with the blues for a long time now. He has played on four albums with Muddy Waters (three of which won Grammy Awards). He also toured with Muddy and played with him and The Band in The Last Waltz concert. He played along with Pinetop Perkins on The Nighthawks album Jacks & Kings. In 2005 he won a W.C. Handy Award for Best Instrumentalist, Guitar. In 2007 he formed his own record label, Steady Rollin’ Records, and later formed his own record group, VizzTone Label Group. He has produced for the likes of Candye Kane, Big Bill Morganfield, and Mac Arnold. Mike Sponza contacted Margolin while he was in Europe in 2010. Sponza wanted to inquire about he and his band touring with Margolin. In 2011 that tour became a reality and they did several shows together that were very well received by audiences they played for.

Blues Around The World contains eight songs written by Margolin, two by Sponza, and according to liner notes “two songs that got strong audience response at our shows.” The album opens with “Lost Again”, a lively romp with great old school sounding guitar and a deep, gritty vocal by Margolin. “Blues Lover” has a nice slow groove and sweet acoustic work. Layered over this is some great Ventures inspired guitar tone while the rhythm section lays down a smooth backbeat. A really standout cut! “Down In The Alley” is a straight up old school  blues with Margolin laying down some cutting guitar work. “Rather Than Being Free” is a moderate shuffle with an excellent weave of electric and acoustic guitar, and a mellow vocal from Sponza. “While You’re Down There” sports nice backing work from drummer Moreno Buttinar and bassist Mauro Tolot, with Margolin laying down some fine guitar work that reminds one of the great Danny Gatton. “Ice or Fire” is a mellow, almost swing style, with great picking runs by Margolin and excellent playing by Buttinar and Tolot. This cut also has a fuller sound to it for some reason; just really nice ensemble style playing, which is quickly becoming a lost art.

The second half of the album opens with “Crazy ‘Bout You Baby”, a fine acoustic Muddy Waters style blues. This is followed with a slide infused rendition of “Rollin’ and Tumblin'” and the Sponza cut “It’s Hard To Be On The Road” (again with some mighty fine guitar playing). With a back beat that echos Peter Gunn, and some twangy picking, “Hard Feelings” reels you right on in. “The Door Was Open” almost sounds like a Carl Perkins record with its rockabilly feel and vocals, along with a perky guitar line. The album closes out with a unique arrangement of “Love In Vain”, which Margolin did as a homage to his lost Border Collie, Chloe (whom he misses terribly). At just over 45 minutes, there is plenty of blues here to enjoy. Sonically, the album is well crafted, with an old school feel. Blues Around The World is an album you should not pass up.