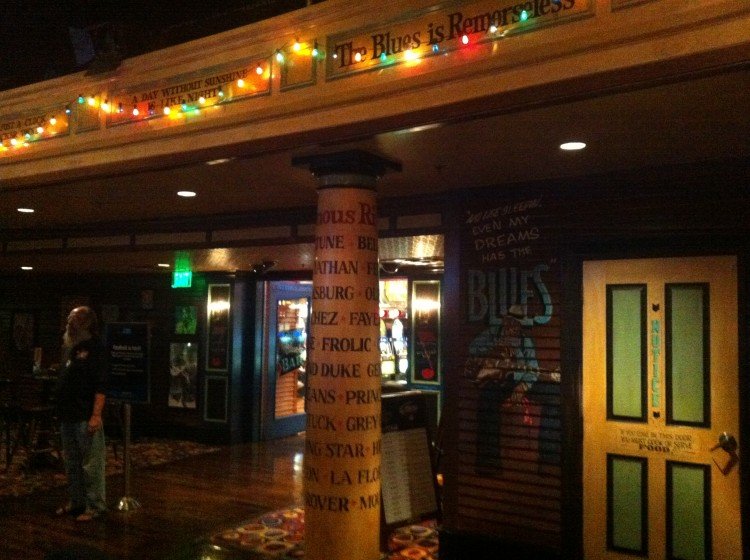 In a warm, still Mississippi night in the bottom of the delta, the blues roared on the big muddy, courtesy of the incredible talent of Stevie J. Vicksburg Blues Society and the fascinating Bottleneck Blues Bar kicked off the Bridging the Blues week in a style that only the delta can.

AmeriStar’s Bottleneck Blues Bar is a fascinating gem: with a sort of carnivalé atmosphere, likely a nod to the nearby magical city of New Orleans, and a decidedly blues vibe, the bar created an irreplaceable musical atmosphere. Blues sayings and phrases such as “The Blues is Love… with complications” were hand painted on the walls. The names, faces, and even famous songs of a number of blues music greats were written on arches above columns. Guitars & folk art adorned walls, and artifacts such as old Mississippi license plates and guitar necks created mosaics in cement.

Stevie J and his four piece band had the large crowd rockin’ with brushes through gospel, Texas blues, Chicago style, and much more. The 2011 IBC finalist had stage presence for miles, thrilling the crowd, that became more and more excited as the set drew on. “Bobby rush told me…” he smiled slyly as he broke into a story about how Bobby Rush told him that all his passion for God in church on Sunday morning should be the same feeling he’s crooning at the microphone about his lost woman on Saturday night!

The Vicksburg Blues Society, AmeriStar, and the wildly talented Stevie J lit up an opening ceremony to twelve days of blues festivals, events, book signings, and more in grand fashion. And that was only Day 1.