The Language of the Blues: BANJO 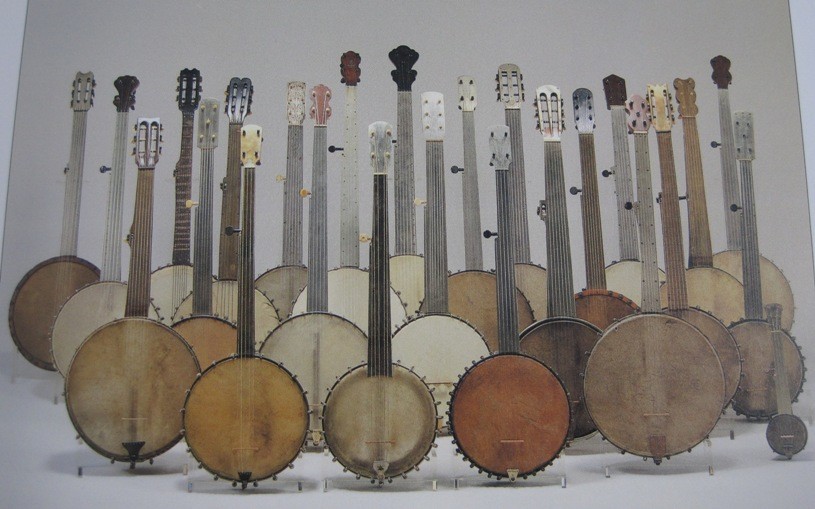 Enslaved members of the Kimbundu, a Bantu-speaking tribe from Angola, brought a stringed instrument they called the mbanza to the American colonies as early as 1630. By 1781, it had caught the attention of Thomas Jefferson, who wrote: “The instrument proper to them [enslaved Africans] is the Banjar, brought from Africa, and which is the origin of the guitar, its chords being precisely the four lower chords of the guitar.”

African languages are complex and interwoven. Bantu, for example, is not a single language; it is actually a group of languages held together by a common core language called Luba-Kasai that contains forty-seven percent of over 500 terms common to all the Bantu languages. The word mbanza, therefore, is strictly speaking a Bantu-Kimbundu word. In the colonies, mbanza became banza, banjar, bangie, and finally banjo.

The slaves made their banjos from gourds, wood, and tanned skins and strung them with hemp or gut strings. Until the 1800s the banjo was considered a strictly African instrument by Southern whites who, like Jefferson, had observed their slaves playing it at dances.

In the 1830s, however, white minstrel performers began using it in their blackface acts. At first these acts were relatively straightforward imitations by Southern whites of the songs and dances they had seen, and sometimes participated in, back home, but in the years leading up to the Civil War (which began in 1861), the caricatures became increasingly vicious.

The minstrels’ mocking representations of African songs and dances brought the banjo to the attention of the nation, but prompted many African Americans to abandon the instrument, leaving it for Southern whites to use in bluegrass and country music.

The banjo was introduced to Europe when the Virginia Minstrels toured England, Ireland, and France in 1843, 1844, and 1845. Their leader, an American of Irish descent named Joel Walker Sweeney, has been widely credited with adding a droning fifth string, called the “chanterelle,” to the banjo. Paintings dating before Sweeney’s birth in Virginia in 1810, however, show the fifth string on plantation banjos, which makes sense given that droning strings had been used for centuries on African and Indian instruments, such as the Senegambian akonting, with its short drone string, and the Indian tanpura (or tampura).

Banjos were fretless until 1878, when Henry Dobson of New York State created a fretted model to improve intonation. Banjos were plucked with the fingers until the invention of steel strings at the turn of the century enabled players to experiment with metal and ivory picks. Some players began removing the fifth drone string to make fast picking easier.

Modern bluegrass banjo players tend to fingerpick using metal picks worn on the thumb, index, and middle fingers. Old-time players have retained the African American style of picking, called “frailing,” in which the index finger brushes the fretted strings on the downbeat and the thumb picks the drone string on the upbeat.

During the swing era, the Duke Ellington band was the first to drop the banjo for the guitar. Other swing bands soon followed suit, and in response guitar companies developed the tenor guitar- a guitar tuned like a banjo- for working banjo players who needed to switch but didn’t want to learn a new tuning.

Pick up a copy of The Language of the Blues: From Alcorub to Zuzu Book

African Origins of the Banjo