American Music Abroad – A Musical Bridge between America and the World 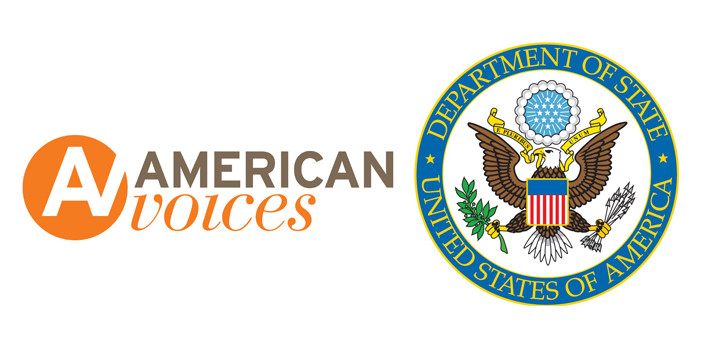 We recently got a chance to catch up with some folks from a fascinating cultural program that is administered by the U.S. State Department through an organization called American Voices. We are bringing the story to the American Blues Scene because, simply put, they’d like to see more blues bands involved and serving as musical ambassadors to the world. Enjoy the interview, and if you feel your band has what the program is looking for, feel free to apply at the links provided at the bottom.

Michelle Los Banos-Jardina and Susan Pittman from the State Dept’s Bureau of Educational and Cultural Affairs. With Paul Rockower – Director of Communication/American Voices.

ABS: Tell us a little more about the program.

Michelle Los Banos:  The program is called American Music Abroad. And right off the bat I just want to say that this program really exemplifies Secretary of State [Hillary] Clinton’s idea of smart power, which means using all of the tools at our disposal. In this case, using the power of music to reach out to people. So what we do through this program is select ensembles to go overseas, and these ensembles represent a variety of American musical genres, including blues. We send them overseas on month-long tours and they go to multiple countries and when they’re overseas they interact with foreign audiences through concerts, master classes, workshops, jam sessions and collaborations with local musicians. All kinds of interactive performances, and it’s a great way for America to showcase our culture, society, and our values to different people around the world using the international language of music.

How long has this program been in place?

During the tour, is there heavy security? Is it generally pretty safe for the bands?

Paul: Yeah, it’s safe. We’ve never had a problem. Depending on what country it is the bands go to, there’s different levels of security, you know. But we work with the embassies, and in places where there is a question of security, we work with them to provide the security. But with that said, there are very, very few tours that require any kind of security. They are going to safe places. Once again, we haven’t ever had any problems. The musicians are greeted and treated wonderfully well by all of the local musicians and the local people they meet. Really there’s just a tremendous excitement and warmth and hospitality everywhere you go.

Do they get much time for sight-seeing and/or tourist activities like that?

Michelle: Sometimes, yeah. We definitely have to give them rest days, of course, because we want to make sure they have enough energy to last throughout the tour. A lot of our bands have come back and they really loved interacting with the locals and really don’t take rest days. In fact, they go out on their own and try to meet with local musicians and do jam sessions and do collaborative work. But they try and do some sightseeing too, to get a feel for the local culture.

Okay, and so based on your experience… How involved has the blues genre been with the program?

Paul: It’s been varying degrees. I mean, we are definitely interested in getting more blues musicians involved in the flying and touring. The history of blues in the form of American cultural diplomacy goes way back, and we’ve sent blues musicians on cultural diplomacy tours for many years, and it’s been part of the cultural diplomacy outreach of these kinds of programs. Blues is very much a part of the American cultural mosaic and very much speaks to the American musical traditions. So, we’d love to see more blues musicians apply and tour on the program. Blues is such a phenomenal American music tradition that it really speaks to so much of the American culture in so many ways. We love to help get blues music out there and get it more positions to travel with the American Music Abroad Program and help communicate the rich history of blues in America. I mean, I think one of the best parts of this program is that we really work in introducing the ensembles that are touring to the local music as well, and you get this real collaboration component to the program which affects both the culture of the country that they visit but the musicians themselves and they learn new styles of music and it affects their music for years to come.

Are any bands welcome to apply, or do they need to be on a certain level with a fanbase or anything like that?

Michelle: It’s pretty open. The minimum age is 18 years old, and you have to be either a trio, quartet, or quintet. Like I said earlier, they are judged based on their artistic ability, but also their dedication to the educational component.

Paul: Anybody is welcome to apply, as long as the band is a trio, a quartet, or quintet. There’s no requirements for previous touring, no requirements for number of albums sold, it is about you applying on your merits—your ability to play, and your ability to educate. The band doesn’t even have to have been together for a long time. You could put together a band for application purposes, and so long as that band will be applying, would be playing as selected, you’re welcome to do that. We understand the fluid nature of musical ensembles, so if a band wants to come together for the application season and for the touring program, they’re welcome to do that, so long as they apply together and stay together for the program.

How are the bands compensated?

Paul: Each member of the band receives $200 per day, and then on top of that, the hotels and meals are taken care of, they stay in generally between four and five star hotels. Really, the only money you spend on the trip is on your souvenirs. You get paid from the day you leave your house until the day you return. If you’re on a 35-day tour you’ll make about $7,000.

Okay. And how many of those do you think in this upcoming selection process… How many blues bands do you think you’d like to have?

Paul: I can’t give an exact number, but we’d love to have as many blues musicians and blues bands as we can get in this. There’s no, you know, “three hip hop, three jazz, three blues”, we would be happy to get as many talented, wonderful blues musicians and blues ensembles applying to educate about the history of the blues. I think what I would say about the program is that anybody who gets selected for the live auditions is obviously a good musician. The X Factor in this is being able to educate about your music, about blues, and where it fits in the American musical landscape. And it’s really going to be the bands that are selected for the tour are bands that can play but also educate.

Based on your experience, what has been the most popular genre over there?

Michelle: They’re all really popular. I guess it depends on the region and the country. We try to send a mix. We don’t try to send jazz to Latin America all the time. We send a mixture of jazz, and blues, and hip hop, and, for example, when I was in Central America, I brought over a jazz quartet, which was really well received, and I also brought an old time bluegrass band. They were also well received. So I think a lot of the folks that we reach out to have such little exposure to American music that they really have a good time. Musicians that are chosen for these tours, they’re chosen not only for their artistic ability, but their dedication to the educational component. They’re good people trying to do their best to showcase not only their talent but also the best of what we have to offer of American culture and our values.

What’s the response like from the arts community both here and abroad?

Michelle: Well, I think the number of applications we had last round shows the positive response we’ve gotten. We had over 300 applicants last year for twelve spots. That was a really great response, so we’re hoping for an equally popular response this year.

Paul: Last year we had a tremendous number of applicants for the program. We had over 300 applicants apply, from every type of music: jazz, hip hop, blues, bluegrass, you name it, so we had a tremendous class of musicians involved in the program. We’re hoping to get even more this year, and we’ll have even more wonderful artists to be selected to be a part of this. Wherever these American Music Abroad ensembles have gone, they’ve been incredibly well-received, really fostering good will toward American music and toward the American people, and people creating that people-to-people connection does so much to further communication among all cultures. Having just got back from a tour, it’s amazing to see firsthand, really. The connections made through music. People who can’t even speak the same language, and yet they play together. It’s a way of fostering connections between people with music. It’s really quite wonderful to watch.

Paul: I would love to see more blues musicians apply. I mean, blues is such a phenomenal part of the American musical landscape and I would really love to see some more blues this year. If we get some really good applications from some wonderful blues musicians who can educate on where blues fits in our American musical traditions, we would love to choose some blues ambassadors this year.

Michelle: Please let your followers know that this is happening. It’s a really great program. Overseas, the overwhelming response has been positive. People have said that they had such a different image of Americans prior to the musicians, and when they meet them they’re just so happy to see how friendly they have been and how talented they are, and how much they are willing to share of their own music and culture with them, and also in return, the musicians who have come back from these programs, time and time again they tell us what a life-changing experience it’s been for them—how they were not only able to share their own music, but to receive music and ideas from other cultures. They’ve seen instruments they’ve never seen before, or heard, and I think it’s going to also have an impact on their own music. Foreign music will have an impact on their own music. Part of the program is learning the locals’ traditional songs from one of the countries that they’re going to, and when they play that song for the audience, they go crazy. We just wanted to make sure that you were able to represent this type of music all over the world in a positive way.

American Blues Scene would like to thank Paul, Susan and Michelle for taking time out of their days to share this wonderful program with us.