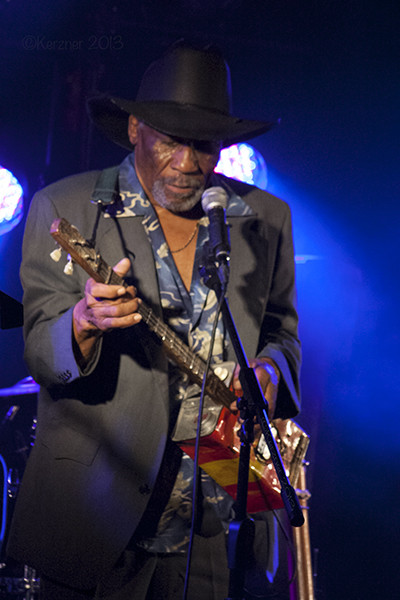 (OCALA, FL) – Ron “Rondo” Fernandez really loves the city and people of Ocala, Florida. The owner of the popular Mojo Grill & Catering Co. works behind the scenes with various community organizations throughout the year, helping people as he can. Much of this work goes unnoticed by the public. Every May however, Fernandez organizes, and hosts the Brick City Blues Festival.

This year’s event (the 4th), was especially ambitious for a number of reasons. For one thing, the event was moved to a new venue; the space that was formally the Midnight Rodeo entertainment complex, which closed in September of 2011. This in turn required the space now be cleaned up, reconditioned, and readied for hundreds of guests attending the festival. With the help of numerous community based sponsors, the space was marvelously transformed. In addition to the food and music, there were various vendors positioned around the perimeter of the main hall. These included local businesses, artisans, and charities.

The evening’s music began with local favorites, The Brown Brothers. They proceeded to play a set of great blues that included “You Gotta Help Me,” “Dump That Chump,” and a lively version of  the Canned Heat classic, “On The Road Again.” Especially well played was “No One Left To Run With Anymore.” Kudos to Skip Olenick (harp and vocals), and Doug Adams (guitar) for some great, heartfelt playing!

Up next was B.B. King’s friend, Sheba Queen of The Mississippi, who was backed by members of Mojo Downs and The Brown Brothers. Sheba gave a spirited performance that at times was a little Mississippi, a little Memphis, a little Sunday Church gospel, and even a little playful. High points were the gospel flavored “Shake A Hand,” the playfully risqué “Got A Big Man,” a great rendition of “Woke Up This Morning,” and an old school presentation of “Unchain My Heart.”

Following Sheba were Rondo and The Mojo Downs, who delivered one hell of a set! These gentlemen played a heavy  “I Just Want To Make Love To You,” originally written by Willie Dixon, and first recorded by Muddy Waters. They also played rousing versions of “Hoochie Coochie Man,” the Freddie King classic “Going Down,” and energetic versions of the Allman Brothers staples “One Way Out,” and “Whipping Post.” Rondo stopped briefly to mention the three charities benefiting from the event: Ocala Outreach Foundation, Inc., the SOS Foundation for Epilepsy, and near and dear to his heart, The Jacob Casey Foundation. Rondo briefly told the story of Jacob Casey, whom he had known, and by the time he was finished, he was teary eyed. He then launched into an awesome delivery of Jeff Buckley’s Hallelujah that brought down the house.

The main event of the evening was Mac Arnold and Plate Full O’ Blues. For those who don’t know, Mac Arnold played bass with Muddy Waters and his band in 1966, when he was only 24 years old! Later he backed up B.B. King, and the Temptations. Arnold and his band gave the crowd a set of Chicago blues that was kickin’! High points included “Ghetto Blue,” “True To You,” Jimmy Reed’s “Shame Shame Shame,” and Muddy Waters “Walking Through The Park.” The crowd was privileged to watch this master at work. Also of note was guitarist Austin Brashier’s phenomenal playing.

Everyone involved made this year’s Brick City Blues Festival the great success it was. Attendance was good, the music was incredible, and charities in the community were helped in a huge way.  We are looking forward to next year.