The Language of the Blues: "BOTTLENECK" 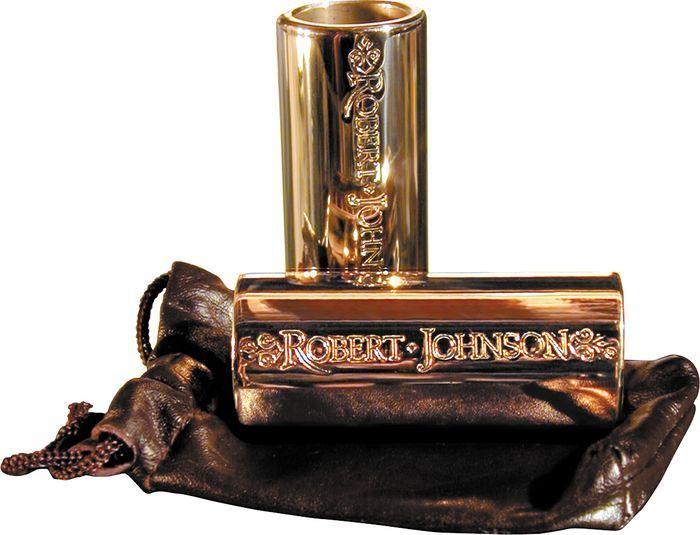 Although early slide guitar players used knives and polished bones as slides, by the Depression blues guitarists were breaking the necks off of bottles and polishing the edges over campfires to create bottleneck slides.

The first blues ever documented in writing, though, was played by a guitarist using a knife, as described by William Christopher (W.C.) Handy. Handy had fallen asleep while waiting for a train in Tutwiler, Mississippi in 1895 when he was awakened by a haunting melody. “A lean, loose jointed Negro had commenced plunking a guitar beside me while I slept,” Handy wrote. “His clothes were rags; his feet peeped out of his shoes. His face had on it some of the sadness of the ages. As he played, he pressed a knife on the strings of the guitar in a manner popularised [sic] by Hawaiian guitarists who used steel bars. His song, too, struck me instantly. ‘Goin’ where the Southern cross the dog.’ The singer repeated the line three times, accompanying himself on the guitar with the weirdest music I had ever heard.”

A traveling minstrel musician at the time, Handy was so inspired by the sound that he dedicated the rest of his life to exposing the blues to the world. In addition to composing “St. Louis Blues” and other blues-related songs, Handy worked tirelessly transcribing authentic blues songs, which he published in Blues: An Anthology (1926).

Since African slaves brought slide technique with them to the American colonies, it likely originated in Africa. Then again, modern North Indian guitarists, such as Debashis Battacharya, use slides, too. So do the Hawaiian guitarists that W.C. Handy mentioned.

The sophistication of Battacharya’s slide playing was evident at his performance at the American Museum of Natural History in Manhattan in 1995. With his wide-bodied guitar flat on his lap, braced by the heel of his bare foot, Battacharya moved a solid metal slide in his left hand in quick flourishes, pulling out microtonal melodies anchored by the steady bass rhythms he drummed with the pick on his right thumb. Battacharya encored with a simple North Indian folk song so undeniably bluesy that it would have sounded like an American blues instrumental if the other performer on the bill, John Hammond, had played it on his Dobro.

The modern guitar is a direct descendant of the oud, an Arabic lute that was introduced to Europe during Spain’s Muslim reign. Both the quartertone singing of Indian and Arabic singers and the sophisticated slide guitar playing found in North India hint at a strong connection between the Muslim world and the blues.

The technique that Handy witnessed — pressing a knife on guitar strings — has been traced to Central and West Africa, where people play one-string zithers that way. Handy assumed the technique was borrowed from Hawaiian guitar playing, but it’s possible that the itinerant guitar player Handy heard was manifesting African roots.

In an interview for The Language of the Blues: From Alcorub to Zuzu, Howlin’ Wolf’s guitarist Hubert Sumlin, who was born near Greenwood, Mississippi in 1931, agreed, saying, “The way the guitar was played with the slide was coming from African people.”

Depression-era guitarists wore bottlenecks on the ring or little fingers of their fretting hands. Slide players also used small medicine bottles or snuff bottles, which didn’t require cutting or firing. Country blues players used a variety of slides, from knives, pieces of copper pipe, and bottles to the polished cow bone favored by Joe Holmes, a.k.a. King Solomon Hill, on his recordings for Paramount in 1932.

Slide guitarists who played rock, such as Duane Allman and Ron Wood, cited blues players like Elmore James and Bukka White as their primary influences. The rock and blues slide players of the 1960s often employed glass medicine bottles.

Different slides produce different tones. Duane Allman used Coricidin cold medicine bottles Bonnie Raitt and Ry Cooder favor the smooth sustain provided by a bottleneck. Keith Richards likes the biting tone of a metal slide. Lipstick covers work, as do straight razors, pocketknives, toilet paper rollers, pens, cigarette lighters, small juice cans, beer bottles…anything with a smooth surface that can be held in the fretting hand. The most common way to play slide is to wear the slide around one’s ring or pinkie finger. A knife or pen, in contrast, is typically clasped between the ring and pinkie fingers.

No matter what the player decides to slide along the guitar strings, the idea behind all slide playing is very simple: instead of fretting a string to create a pitch, the guitarist touches it with a slide. One’s ear becomes much more important than one’s eyes when playing slide, as pitch intonation depends on touching the string in exactly the right place. The guitarist has to play more like a violinist, acutely conscious of pitch.

To make a bottleneck slide, start by measuring the length of the finger that will wear the slide. Most players use their pinkie so they can use the other three fingers to form chords behind the slide, but some prefer the greater control obtained by wearing the slide on the ring finger.

Next, choose a bottle that’s pretty straight at the top so as to avoid ending up with a curved slide that won’t lie flat on the strings. Take a glasscutter and scratch a line around the neck of the bottle so that the distance from the top of the bottle to the scratched line equals the length of your finger.

Set aside a bowl of ice water. Heat the bottle in boiling water and then plunge it into the ice water. Take it out after fifteen seconds or so and you should be able to crack the neck right off. Sand the cut edge smooth with some fine sandpaper. And please, before you go to all this trouble, make sure your slide finger fits into the bottle.