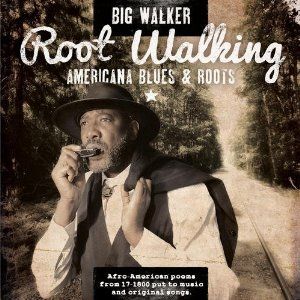 Some projects are unique from their very inception. By virtue of their subject matter, inspiration, and/or execution, these projects distinguish themselves from the everyday, mundane, and clichéd subject matter. Often, the success of such an effort is determined by whether it speaks to its intended audience in a manner that educates, maintains a tradition, provides perspective on a particular history, and maybe even inspires.

Root Walking: Americana Blues and Roots by Big Walker (Big Walker label) is just such a project. This effort uses slave poetry from as far back as the 1700s for lyrics. As stated by Walker in the liner notes: “Many of the lyrics are changed to fit the general public as not to offend or threaten anyone. Some of the poems were told to me as a child. [I] in turn, recited them to my children in the forum of bedtime stories. Others are true accounts of events that occurred in my life, or how I feel about life. Like ‘Can’t Take No Train’ and ‘Slave.'” These lyrics are the voice of a people, telling their stories of day to day life.

Beyond the lyrics, there is the music. This album is set to late ’40s – early ’50s style (sometimes referred to as “post war”) blues. The sound quality and production are good, and the level of musicianship is high. The lead-off track, “It’s Hard,” is driven by light guitar blues, and some great harp playing from Walker. “Raise A Ruckus” is uptempo, with some fine steel picking, and more great harp playing from Walker. “Wild Black Bill” is about a man living life on his terms. It is slow, steady, and thumping, with a bit of wonderful old school slide.

“Run Nigri Run” is an extremely powerful piece. This song conjures up vivid images of a gang of pursuers hunting down the pursued as though he is a hated animal, rather than a human being. The music this hunt is set to definitely has echoes of CCR, and really moves things along. “Papa Guede” has a Louisiana flavor about it with Bonnie Raitt style slide, and will remind some of Little Feat.

“Slave” is a very interesting piece of music. It is slow, bluesy, with an almost spiritual style backing vocal. The music stops at 5:04 and then picks up again at 5:22 with Walker chanting. An undocumented song? At 5:28 the music becomes an up-tempo Chicago style blues with some nice guitar work, killer electric piano, and a great sax run by Walker. This is a “HooDoo” song. Very tasty!

Root Walking: Americana Blues and Roots is a very different kind of blues album. It is a unique undertaking that works well. The finished work is spiritual; at once entertaining the listener, and forcing them to really hear what is being said. The images it entices the listener to conjure up are vivid and real. The excellent “post war” style blues these lyrics are set to, elevate and enhance the whole experience. Excellent work here Mr. Walker!