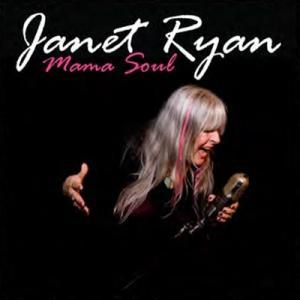 Janet Ryan is “Mama Soul” and that ain’t no lie. Ryan has a strong, huge voice, and she is not afraid to use it. Her newest album, Mama Soul, is evidence of this. Ryan discovered her love of blues years ago while living in Chicago. Frequenting the juke joints of that city’s north side, she listened and learned from some of the best blues has to offer, including Magic Slim and Koko Taylor. She even sang with Duke Ellington at the tender age of 16. Ryan is well known in the Northeast having spent a lot of time performing in New York, New Jersey, and Connecticut at numerous venues, as well as playing the club circuit.

The album title, Mama Soul, is the nickname a friend gave her. This album offers 13 songs;  some by Ryan and the band, some from the Texas band, Crosscut, and the Sippie Wallace blues “Woman Be Wise.” Of course the album has blues, but it also has gospel, and R&B influenced material. Overall, the sound is very much that of a good club band. The musicianship here is extremely good, and the production is well done. The only thing missing is the club warmth and ambiance. (Think analog versus digital.)

There are several standout tracks here. “He Burned That Bridge” is a juggernaut, with jumping piano and some nice slide work. There’s the jazzy “What I Like Best” with some nice guitar comping and keyboarding. “Mr. Misery” is slow, with haunting guitar licks, solid backing from the band, and the best vocal on the album. “First To Say Goodbye,” with its Memphis sound, really showcases the talented playing of this band. Another track that highlights the band’s talent is “Love Has Left The Building,” which also has a good vocal turn by Ryan. “Women Be Wise,” is really well done, with its low key, easy vocal, nice brushwork, and smooth guitar.

There is a lot to enjoy here. Our one quibble is that while Ryan does have a strong, powerful voice, there are times when nuance in a vocal is much more beneficial to a song than full out all the way through. Also: Being coy and delicate is one thing, and being tentative is something else entirely. We look forward to seeing what Ryan does next.