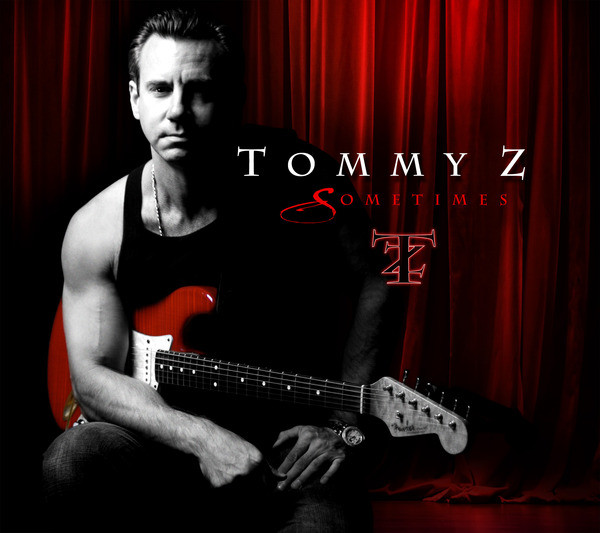 As we go through our everyday lives, we come across a whole lot of “ordinary.” We have to endure generic cars that have no panche, aren’t sexy anymore, and in general, the romantic attachment that used to be there is gone. The cozy quality diners of yesteryear are disappearing. McDonalds fries are no longer as good as they used to be. Vinyl albums are a luxury now, and the magic of “album art” is just not there when you look at a CD cover. So when, in the course of your day-long trudge through the suffocating wilderness of “ordinary,” you come upon something exceptional, that is something to be savored and celebrated. Especially something that harkens back to style, quality, and is just plain sexy.

Well, blues fans, get ready to be wooed! Tommy Z‘s new album, Sometimes, came across our desk today, and all we can say is “Wow!” Here’s a player that has paid his dues and put in his time. He has performed with and/or played on bills with Robert Randolph, Peter Frampton, Jeff Healey, Room Full of Blues, and many more. He also toured as a member of Pinetop Perkins’ band. In addition to performing, Z also composes, produces and engineers. His competence speaks for itself.

Sometimes, issued on South Blossom Records, is everything an album should be. The musicianship of all the players is top-shelf. The writing is good, the mix is full of detail and depth, and there is not a single note that is out of place anywhere. Z’s command of the guitar is substantial and impressive. What is cool about his playing is that it exudes emotional content that is genuine. It is not contrived or exaggerated. His tone, and touch dynamics are excellent. The influences of Stevie Ray Vaughan, Buddy Guy, and Freddie King are plainly apparent.

Standout tracks on Sometimes include “Roger That,” which will have you believing that Stevie Ray Vaughan is back, with Eric Gales and Melvin Taylor tearing it up alongside him. This is a scary good track. There’s a fun Stax style rendition of Willie Dixon’s “200 lbs. of Fun,” and a lively version of Johnny “Guitar” Watson’s “Gangster of Love,” with an exquisite backbeat, and delightfully slow, wicked guitar lines. “Snooty Funk” is sparse, simple, grooving funk, with tasty organ fills, and round, thick, punchy guitar. A slow blues, “So Tired Of Being Lonely” is rife with crying, sweet guitar just dripping with great tone!

Tommy Z’s Sometimes brings back real guitar. This is blues that will kickstart your heart! It’s sexy, bluesy, fretboard magic; blues guitar, played the way it should be. You should bring this one home with you now. Why are you waiting?