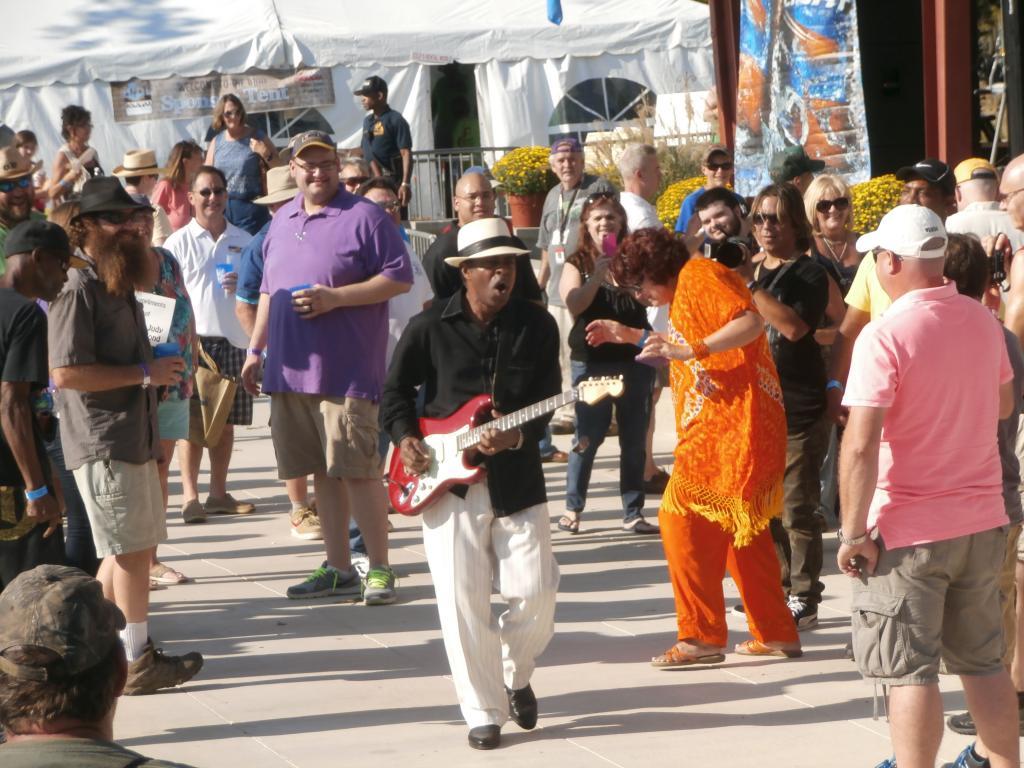 To be honest, not a lot happens in Bogalusa, Louisiana. Located a little over an hour north of New Orleans, this small city with a paper mill as its main employer isn’t usually a hub for visitors.

On Friday, September 28, that all changed on the day of the Bogalusa Blues and Heritage Festival. Now in its second year, the event transformed the sleepy city of 12,000 into a regional mecca for fans of the blues.

The Bogalusa Blues and Heritage Festival featured a stellar lineup of local and national performers; there was something for everyone. From the sexy jams of Ana Popovic to the blues of festival headliner and veteran musician Walter Trout to the roots ‘n’ rock of Paul Thorn, the full lineup – which also included Vasti Jackson, Jonathon “Boogie” Long, Homemade Jamz, and JD Hill & the Jammers featuring Chance Casteel – drew heavy, but laid-back crowds.

“We are really thrilled with the turnout…the park looks beautiful,” said Marcelle Hanemann, Chairperson of the Bogalusa Blues and Heritage Festival Promotions Committee. “We’re seeing a lot of out-of-state people.”

Thousands of lawn chairs sprawled across Cassidy Park. Some settled in the grassy, sunny main stage area, some were under the ample shade canopies provided by organizers, and others were under the moss-draped oaks that gave this festival a real Louisiana vibe.

Another South Louisiana touch came in the 2013 “Heritage Tribute” that payed homage to Clarence “Gatemouth” Brown.  A Grammy winner, Blues Foundation Hall of Fame member, eight-time winner of the W.C. Handy Award and recipient of the Pioneer Award from the Rhythm and Blues Foundation, Brown recorded his 2001 album Back to Bogalusa in this city on the north shore of New Orleans.

The crowds were relaxed and appreciative of the sunny weather, which was a relief for organizers, as the inaugural Bogalusa Blues Festival of 2012 had been rained-out.

“Everyone, starting from the first band up there, have been strong. The crowd is excited about it and reacting enthusiastically…I love it,” remarked Hanemann, visibly delighted by the year’s success.

The feedback from the audience was extremely positive.

“Everyone is saying what a cool thing it is,” said Hanemann. ” A number of people have mentioned the Jazz Fest in New Orleans, that we’re on course to get to that.”

Now a one-day event, when asked when it will expand to a full weekend Hanemann seemed positive the event was ripe for growth.

“We pondered it [doing a full weekend] this year, but we decided to wait at least another year,” said Hanemann. “We learned a lot last year and learned a lot this year, so next year we’re probably ready to go two days.”

Pointing out the size of the park and detailing the city’s ownership of adjacent land that could someday be purposed for Festival expansion, Hanemann seems sure that the blues celebration hasn’t come anywhere close to reaching its potential. “We can grow this thing for a while,” she added.

As a personal and intimate musical style, the blues is best enjoyed up-close; festival organizers understand the risks of losing that with growth.

The kind of “personal experience” Hanemann was talking about was evident, as music fans wandered to the front of the stage to snap a few photos or dance to a special jam and then headed back to their seats to kick back and enjoy the rest of the set. The intimate feel of the experience was most personified by bluesman Vasti Jackson, who continually wandered among the crowd with his guitar, jamming up-close-and-personal with the audience. As he went from lawn chair to lawn chair to perform personal mini-jams for various audience members, some followed him as if he were a bluesy pied-piper.

Stan Billings, of Memphis, drove in from New Orleans to spend the afternoon enjoying his favorite music.

“I’m a big, big blues fan,” said Billings. “Some of this is more electric than I prefer, but it’s blues, so we take blues anytime that we can get it!”

Unexpectedly, many of the people I spoke with said they were there for the rootsy rock sounds of Thorn.

A man identifying himself as “Glen” from Baton Rouge loves the blues so much that he travels to King Biscuit in Helena Ark. every single year.

“I love Paul Thorn. I’ve seen him up in Helena the last three years and I loved him. The lineup has been good today, they have some real talent up there.”

As Popovic took to the stage, the sun faded and temperatures cooled. She was followed by Trout, who closed out the day for an audience who came from far and wide to celebrate the blues.

The festival also featured a Heritage stage for visitors wanting a sampling of local talent. The lineup featured the Franklinton High School Jazz Band, Righteous Wolf, Big Fun Brass Band, Tyler Kinchen and the Right Pieces, and was rounded out by the Eli Seals Band.

Cassidy Park was filled with food vendors offering BBQ and other food specialties. There was a children’s area to occupy the young ones and Festival admission also included arts and crafts vendors scattered around the grounds, as well as free admission to the on-site Native American Museum, where visitors could take in a bit of local history.

Carolyn Crow made the drive across Lake Pontchartrain from New Orleans; she enjoyed her first Bogalusa Blues and Heritage Festival.

“The appeal is just getting blues all day…and getting outside,” said Crow. “I’ll be back.”