Bluzapalooza Brings It All Back Home for Our Troops 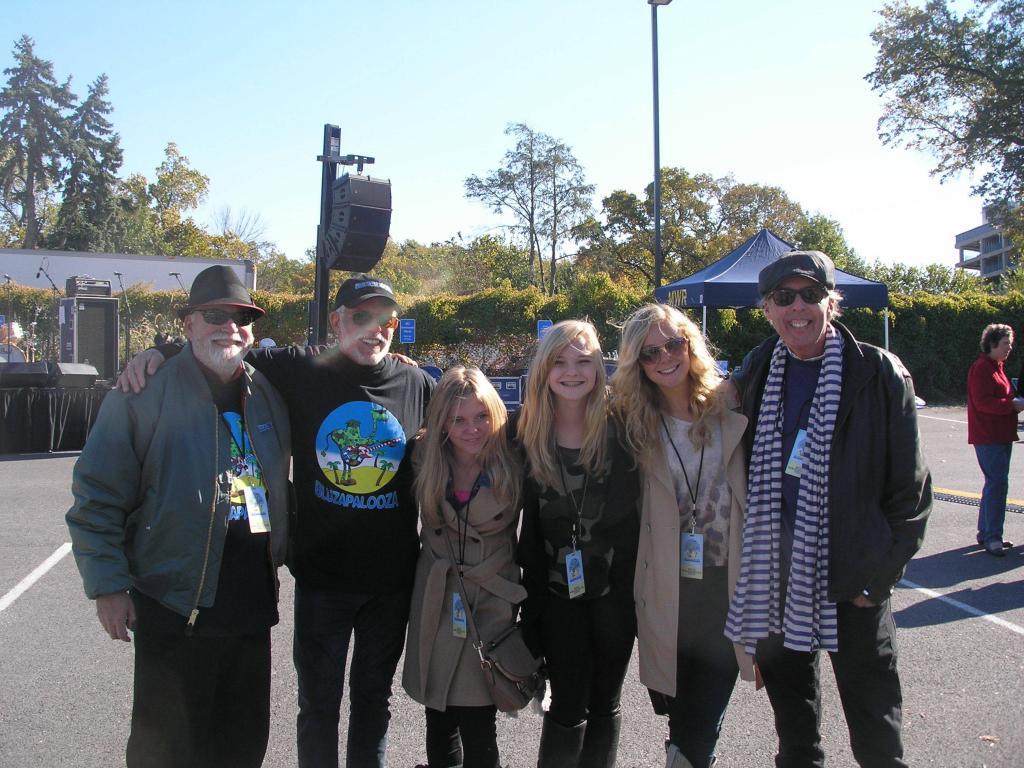 Shemekia Copeland‘s manager and songwriter John Hahn recalls a pivotal moment during the first Bluzapalooza tour of Iraq in 2008. “We’re going down the Highway to Hell with no sleep and totally punch drunk. The guy got up and he said, ‘I’ve got good news and bad news. The bad news is there’s so much going on that you’re not gonna be able to fly out of Baghdad. It’s too dangerous. There’s too much happening. You’re not gonna be able to play the Green Zone in Baghdad.

‘We’ve got to start planning everything all over again, but we will have dates for you to play. You didn’t come here for nothing. You’ll get to play at all the bases around Baghdad, Victory and Liberty, and I can’t tell you what else ’cause we’re putting them together. The good news is that a couple of you are gonna be able to stay at one of Saddam’s palaces.'”

As a Vietnam veteran, I can tell you there’s a level of giddy insanity that takes over whenever dedicated people try to function in their jobs while up close and personal in the face of an enemy that’s trying to destroy them. I know. I edited a daily newspaper at U. S. Army Headquarters, Long Binh in 1969. People always say, “Oh, yeah, ‘Good Morning Vietnam.'” Robin Williams was a lot closer to reality in that film than most people realize.

When Bluzapalooza organizer Steve Simon invited me to attend the latest performance of his ongoing Bluzapalooza Festival and his first in the United States at Walter Reed Medical Center in DC on October 26th, I was thrilled. In the 44 years since I served in Nam I’ve come to realize that we veterans may not have changed the attitudes of our country’s leaders towards war, but we did help change our society’s attitude towards warriors. And Steve Simon’s personal crusade to bring music to the troops is an amazing – and largely unsung – example of that shift in attitude.

When I arrived at the site, Steve was so pumped up that his feet seemed to levitate off the tarmac. “We’ve been all over the world except the United Sates. So, to be here in the heart of our country where our wounded warriors are recovering and being rehabilitated, where doctors and nurses and medical staff are making miracles happen for our troops, both ones that have been wounded in service as well as those that as they got older have gotten various types of ailments – I mean these are real miracle workers. And for us to be here today and present the blues and present Bluzapalooza is just a gift to us all. We’re thrilled, happy and we’re excited.”

In five years Steve – who is best known for presenting Bluestock in the middle of a hurricane in upstage New York two years ago – has personally organized two tours of Iraq in 2008 followed by performances in South Korea, Kuwait, Japan, Italy, and Guantanamo playing to thousands of men and women in uniform. Performers who literally risked their lives to give soldiers a taste of home include Bobby Rush, Janiva Magness, the late Michael Burks, Zak Harmon, Lil’ Ed & The Blues Imperials and Tinsley Ellis.

John Hahn’s description of Bluzapalooza in Iraq sounds like a Hunter S. Thompson tale. But it reflects the mayhem and confusion that underline such an effort to bring a touch of home and appreciation to our soldiers under untenable working conditions.

“We stayed in a palace called Victory over America, and next to us was another palace that had been totally bombed out. We could look across the lake which we called Lake E Coli because we weren’t allowed to touch the water or anything. They told us to keep our mouth closed in the shower and all that stuff. We slept in what was basically a ballroom on Army cots with a chandelier and Sadham’s name in Arabic writing and mosaics over our heads on the third floor. Half the stairs were destroyed.”

“Finally, we got to sleep about noon, and I had just put my head down on the pillow and was finally asleep. You know how when you’re overtired you can’t sleep right away? I finally got to sleep and I hear ‘Ugh- uuuh!’ It was Steve who sometimes screams in his sleep. So I thought somebody was waterboarding a Goddamn camel. It was like this unholy noise. I went to sleep, and he did it again.

“We went to the Al Faar, I believe it’s the palace where the Americans set up people like Petraeus and staff. They had been there, and they gave us big medallions, and there was another manmade lake outside. And on the second floor the Marines and G.I.s had turned it into a place to smoke cigars. So they would sit there and watch these enormous carp in Lake E Coli II, and they’d be smoking cigars.

“It was surreal. I’m in Saddam’s palace. I got American troops smoking cigars here, and here is a driving range, a stand where you can put the golf balls down and whack them into the lake. And I got up and whacked a couple into Saddam’s manmade lake and typically almost corkscrewed myself off the side of the place into the water. I told you about the rocket attack and all that other jazz, but wonderful, wonderful, wonderful life experience and people telling us – a young Marine woman coming up to and she said, “For two hours you made me forget where I was.”

This first U.S. festival in DC was emceed by Steve Simon and former Sirius XM Bluesville head Bill Wax who told me, “I have emceed a lot of shows, but this one is very, very special. I’m honored to be here so that we can honor folks who have put themselves on the line for all of us.”

Headlining was Shemekia Copeland with Homemade Jamz, and Southern Halo, a trio of teen sisters who opened the day and all but stole the show. “It makes us feel good because we really like soldiers and what they do for us,” said lead guitarist Natalia Morris, who at 16 is the oldest. Fourteen- year-old drummer Christina added, “We’re trying to write a song for the soldiers, a country song. So it feels great that we got invited to come here. It’s such a big honor.” “I was like is this for real, to go play for the soldiers,” asked 13-year-old sister Hannah who started playing bass so her sisters could have a power trio of siblings.

Southern Halo mixed and matched old standards like “Crossroads” and “Boom Boom” with The Strangeloves’ 1960s rock hit “I Want Candy,” the Bill Withers’ standard “Ain’t No Sunshine,” and a couple of originals the blur the line between contemporary blues and modern country. They are solid players with a fresh sense but also an intense feeling. Watch for them.

“Both my parents were in the military,” said Ryan Perry of Homemade Jamz, the second act on the bill and another trio of siblings who played material from their latest album Mississippi Hill Country, the title reflecting their delta origins. “Both parents are veterans of Desert Storm so I have the utmost respect for all military, and my outlook on all the military is nothing but the positive in the highest regard. So that’s my look at it.”

Both Ryan and Kyle on guitar and bass respectively played their patented instruments with bodies made of Toyota mufflers. “(The idea for a muffler guitar) came from my dad. He was helping me restore my first car. They all bought some mufflers for it, and when they came in the mail, my father wanted to make a guitar out of it instead as a little conversation piece. I said no because I paid good money for those mufflers, so he took it from me anyway and made the guitar. One thing led to another. So I played it on stage and everybody loved it.”

“Going to Iraq and Kuwait was an eye opening, amazing experience that changed my life, said headliner Shemekia Copeland, “and being there with some of these kids that are 10 years younger than me just affected my life. “We watched them transform. We watched them forget where they were for the two or three hours that the show was going on because they were having fun, and they were able to kind of step away from it for a little while, and it was just an amazing experience. We had ’em up on the tables on stage.”

Shemekia and her crack band belted out “Lemon Pie” and “Somebody’ Else’s Jesus” from her current album 331/3 and favorites from an extensive repertoire written by her manager John Hahn including “It’s Over.”
“Music is a healer,” she said. “It makes you forget what situation you’re in at the moment.”

Bluzapalooza was a heady experience for me. Maybe it’s because I’m a journalist, but what mattered to me in risking my life in Vietnam was the need to feel that my role would contribute toward some lesson for the generations to come. If I was going to die, I at least wanted my death and the death of thousands of others to change the attitude of our country’s leaders’ toward war. That hasn’t happened, but something perhaps more important has. Our sacrifice and those of our troops in Iraq and Afghanistan have changed our citizens’ views of us as soldiers. And it’s changed those of us who served. It’s about the warriors not the war.

Ted Nettles of the Maryland Patriot Guard, an organization of 275,000 biker veterans that looks out for the needs of veterans, told me a story at Bluzapalooza about how they broke down the barriers of Washington’s World War II memorial during the government shutdown to get vets, many in wheel chairs, in to see it. A Mississippi Senator had tried and failed to get them in. Nettles and his crew told the Senator, “We have tried it your way, and now I’m gonna show you how we do things.” Nettles went up to the guards, and I said. “Look, I know you all don’t want to be doing this, so what you need to do is take a coffee break ’cause I’m bringin’ these guys in here to see this monument.”

“My favorite takeaway from Iraq and from all of the Bluzapaloozas,” says organizer Steve Simon, “was a young woman in her 30s from Atlanta, Georgia, in uniform with a big, big gun around her shoulders, and she came over to me after the show and she said, ‘I’m from Atlanta. I have two little kids at home. I never thought I’d be going to war. I signed up for National Guard Reserves because I wanted the education and health benefits. My husband back home is taking care of the kids, and this is the first time in the year that I’ve been here that for a couple of hours I forgot where I was. God bless you.’ Man. I’ll tell you, there wasn’t a dry eye in the house. I mean that was so touching, and that has stayed with me ever since. We bring a sense of home, a sense of joy, a sense of love to every man and woman that we have an opportunity to entertain.”