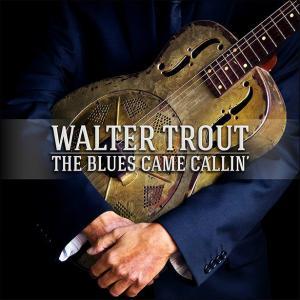 Over the course of the past year or so, Walter Trout has engaged in the fight of his life. In fact, he has been fighting for his music, the love and comfort of family, and for his very life itself. Walter has been anxiously awaiting a liver transplant, working to regain strength to undergo this demanding procedure. A call had gone out to fans and blues lovers alike to help Walter and his family through an online fundraising campaign to help defer medical and other necessary expenses. The response has been overwhelming, and to date $229,000 of the $250,000 goal has been raised. Yesterday, he finally received the liver he has been waiting for so patiently.

2014 marks Trout’s 25th year as a solo artist, and when he had rejoined Provogue in 2008, there were discussions about celebrating this milestone. Throughout 2013, as he was becoming progressively ill, Walter recorded new songs when he wasn’t touring. Even as he became weaker physically, he was more disciplined, focused, and determined to complete his new album and release it. The Blues Came Callin’, on Provogue (Mascot Label Group), is the fruit of his struggle, and it is indeed a labor of love. The album tells Trout’s story, beginning with his struggles growing up in poverty, finding the blues, his career as a guitarist in the finest blues bands, his struggles with drugs and himself, and closes with Walter expressing his love for his best friend, his wife Marie.

The 12 songs that comprise The Blues Came Callin’ are 58 minutes of a soul searching, blues awakening journey of self-revelation. There is not a dull moment to be found anywhere on this album. Trout has been through life’s pitfalls and struggled to come out on top, escaping the clutches of self-destruction and doubt with a fist full of hard won lessons, and truths. So there it is.  Best of all, he shares these struggles and truths with all of us. Overall, the sound quality and mix here is seriously good. Eric Corne did a phenomenal job producing with an informed, but light touch. Walter’s old friend and former boss, John Mayhall brought his immense talents to the party as well, playing on a couple of tracks.

While there is no dearth of remarkable material here, there are a number of standout tracks. “Wastin’ Away” is smooth, steady, and scorching. Walter says “You will hear in this track that even if my body is wasting away, I am defiant about it. I will not go gently into that good night!” “The World Is Goin’ Crazy (And So Am I)” is thumping rocking blues with brilliant guitar runs throughout. “The Bottom Of The River” is about a man pulled down and held down by the current and how he decides he isn’t ready to die yet. He struggles to the surfaces and is forever changed, realizing the wonder and beauty all around him that has taken for granted for so long. Mostly acoustic, with some fine electric soloing, this track is smoking. “Take A little Time” is a buoyant, joyful honky-tonk shuffle about taking time out from our busy lives for love that features singing electric guitar, and fine piano lines. John Mayall plays an exceptionally relaxed, but vibrant piano on “Mayall’s Piano Boogie” that also showcases Trout’s remarkable soloing. “Tight Shoes” is full up with ripping guitar that has unbelievable tone. Amazing! “The Blues Came Callin'” is a slow, chord driven blues masterpiece. The album closes with “Nobody Moves Me Like You Do,” written by Walter for his wife, Marie. It is an honest, real expression of the love that he has for her.

This is a different kind of album for Trout. The music here is disciplined, focused, and urgent. At the same it is unhurried, and although the playing here is unbelievably tight, this music breathes. The music is expressive, honest, and entices us to pull up a chair and listen. This masterwork is the summation of a lifetime of learning and growing, and it will be held up as a fine example of everything blues can be for many years to come. The UK release date is June 2nd, and the US release date is June 10th. Those who do not experience this album will truly be missing out.