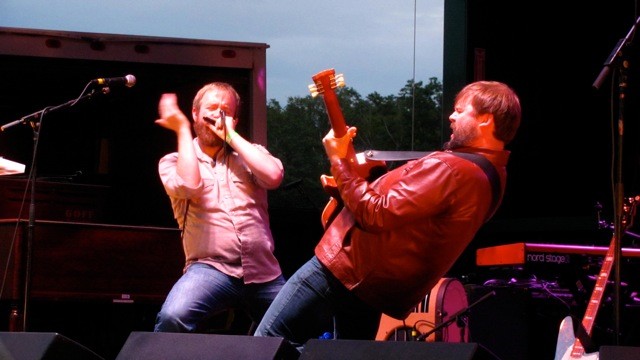 It seems only fitting that Jeff Jensen would have the last word at the 2014 White Mountain Blues & Boogie Festival in North Thornton, New Hampshire. He’d opened the festivities friday night with the “Hi Falutin’ Band”, backing up Grace Curran, and now here he was, playing with her Sunday night at an after -ours tent in the camping area that had been pumping out the jams all weekend long, and had seen Jeremiah Johnson stop by the night before. After playing guitar on a song, he paused to tell everyone how blown away he was by the festival, the scenery, and most of all, the fans — to raucous applause and hooting.

And how right he was; you only need say “The Boogie” in New England and people know what you’re talking about. Winner of the 2012 “Keeping The Blues Alive Best North American Festival”, brothers Mike and Brad Benton have turned their family’s Sugar Shack Campground into a blues mecca one weekend in August for almost twenty years. Over 5,000 people showed up to boogie to thirteen bands on the banks of the Pemiwigassett River in a beautiful natural setting.

Friday night was “Ladies Night”, as Grace, Samantha Fish and Carolyn Wonderland showed that the female side of the blues can get just as soft or down and dirty as the male side. Grace, who’s moving from Boston to Memphis, got the crowd in a good mood immediately, augmented by the Roomful Of Blues Horns, and Jeff’s frenetic guitar playing.

Samantha shined on guitar and cigar box git fiddle, with bass profundo Scott Sutherland growling underneath it all. She did a mix of originals (“Sucker Born”), and tasty covers (John Hiatt, the Stones’ “Dead Flowers” and Black Sabbath’s “War Pigs” as an encore!). Carolyn, who’d driven all the way from Texas, wowed on guitar and lap guitar, especially on the late Grateful Dead’s Vince Welnick’s composition “Golden Stairs” and one of the first songs fellow Texan Janis Joplin wrote, “What Good Can Drinkin’ Do?”. Everyone went back to their tents or lodging feeling a great weekend was just getting going.

Jesse Dee’s seven piece band got saturday off to a rousing start at 11am, with a set full of blue-eyed, horn propelled soul from his Alligator major label debut “In My Mind In My Heart”. Most people still had coffee in their hands, though it may have been made a little stiffer by some additions! Last year’s favorites Jeremiah Johnson & The Sliders turned it up a notch with more horn-driven, rockin’ blues. They were surprisingly energetic considering they’d spent the night in the Burlington, VT airport, after they’d arrived late and the car rental agency was closed. (Please don’t hold it against us Burlingtonians JJ!!)

Indigenous also had their troubles getting there, but Mato Nanji and his young backing band roared through their set too. (Throw that Garmin in the wastebasket!!). Dom Flemons, formerly of the Carolina Chocolate Drops, entertained beautifully between sets, as his acoustic interludes were the perfect counterpoint to the rest of the program’s electric fare.

Multiple Canadian blues award winner Shakura S’aida pushed the bar even higher with her 8 piece band in a very interactive set full of crowd exhortations and double entendres. “Get yourself a horn player if you’re looking for Ms. Right”, she sang next to her female horn section; “they know how to use their fingers and can hold their breath a long time”, to cheers from the men in the audience. For the ladies: “If you’re looking for Mr. Right, get a piano player. They don’t care if you’re black or white, they play both the same”. Canadian Piano Player Of The Year Lance Anderson looked on, smiling approvingly.

Just back from Europe, the Wichita, Kansas-based Moreland & Arbuckle continued upping the ante, with a set heavy on Little Walterish hill country blues. Aaron Moreland prowled the stage like a caged tiger, Dustin Arbuckle blew rootsy harmonica and Kendall Newby held the pocket down with crackling drumbeats. The evening culminated with Southern Hospitality, the “supergroup” of guitarists JP Soars and Damon Fowler with 2 time BMA Piano Player Of The year Victor Wainwright. Their songs epitomized the title of their debut album”Easy Living”, with each sharing vocals. Grace, Shakura and Jeff Jensen came out to help the throw down finish on a perfect note with the appropriate “Sugar Shack”. The legendary fireworks display capped off the evening.

Sunday morning, sleepy bluesheads were treated to rollicking honky tonk piano and gospel inflected blues from Kelly Hunt at 11 am. The final day was off and running. Brandon Santini showed why he was nominated for Harmonica Player Of The Year. Nattily dressed in a silver suit and his trademark fedora, he tore through a set of classics and originals, also echoing other performers in his praise of how topnotch the festival was, how glad he was to be a part of it, and how he couldn’t wait to come back. Neither can we.

Until sunday, I’d only seen the Nick Moss Band hosting the Rum Boogie BMA jam in Memphis. Left to their own devices, what a show! Blues, funk, rock & roll, soul, fast, slow, Chicago style, jammy–his set had it all, marked by his searing guitar and the incredible vocals of Michael Ledbetter. He praised the recently departed Lynwood Slim, who’d produced four of his albums, saying “We slept on each other’s couches, sometimes together!” He also remarked on the place The Grateful Dead, the Allman Brothers and Phish have in the blues world, before embarking on a long trippy jam, saying “I hope we don’t induce any tie dye flashbacks due to herbal supplements”. the crowd bellowed their approval. A light show would’ve sent us back to the days of the Fillmore East.

John Nemeth crossed the t’s and dotted the i’s to cap the festival, with a great soul drenched set. Augmented by 2 o the 3 Roomful horn players (” I could only afford 2!”), he told of practicing harmonica while driving a truck to the sounds of Jr. Wells. Brandon Santini joined in for “Do You Really Want That Woman”, playing diatonic harp with John on chromatic to showcase the different sounds of each. “Stop” was a perfect choice to close the set and festival, and everyone headed home or to their campsites aglow from the weekend’s festivities. We can’t wait to paint the White Mountains blue again in 2015.