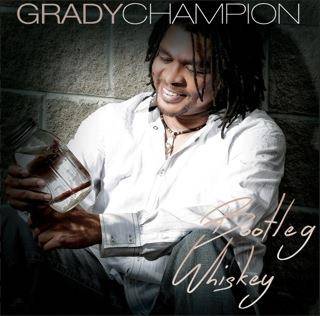 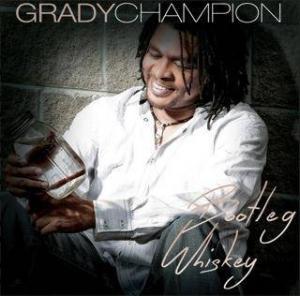 Canton, Mississippi native Grady Champion burst on to the blues scene in a big way when his band won the 26th Annual International Blues Challenge in Memphis, Tennessee back in 2010. Since that time, the singer, guitarist and Sonny Boy Williamson-influenced harmonica player has been releasing albums and touring the blues circuit.

His latest offering, Bootleg Whiskey, on the Malaco label is a return to the rhythm & blues and soul that seductively permeated the airwaves decades ago and it is a welcome return indeed.

Malaco founder and producer of Bootleg Whiskey, Tommy Couch, Jr. has pulled out all the stops, bringing in songs written by his stable of legendary songwriters. Larry Grisham, Darrell Luster, Ernie Johnson, Jerry Strickland and the legendary, late George Jackson all contributed and Champion, himself, wrote or co-wrote five of the tracks.

The album’s first track, “Beg, Borrow, Steal” is a shuffle boogie number that sets a nice pace showcasing Champion’s harmonica skills. From that point, Bootleg Whiskey takes a turn toward some call “baby makin’ music”. The kind of tunes that Bobby “Blue” Bland, Johnnie Taylor and ZZ Hill would croon and DJs would play at house parties as the wee hours approached. Not your junior high slow dance songs, but something that grown folk can grind to.

“Bootleg Whiskey”, “Don’t Waste My Time”, “Home Alone” and “Ten Dollars” are songs made for dancing with your partner, up close and personal, with a handkerchief handy to wipe the trickles of sweat from your brow. The first released single, “South Side” takes the listener on a tour of the tough and uncompromising neighborhoods of American cities, complete with backyard barbecues, house parties, Sunday morning church and even local street corner gangs.

Tracks such as “Who Dat” harken to the traditional blues songs of the Mississippi Delta like the a cappella standard “Hush (Somebody’s Calling My Name)” while “Here We Go Y’all” brings Champion’s harmonica back in the mix in a powerful way.

“I Tripped and Fell in Love” highlights a tight brass section reminiscent of The Memphis Horns, while “Mr. Right” brings a bit of Island flavor to the project. The final track, “White Boy With the Blues” brings it all home with great storytelling from Champion, the use of traditional spirituals, “Amazing Grace” and “Precious Memories” and featured vocals by Gospel quintet, Crowns of Joy.

Champion’s vocals, evocative of Bobby Rush with an added subdued James Brown growl, are strong throughout and the only thing missing on this album is more of his fine harp playing.

This is a Mississippi album, from beginning to end, and whether you’re from The Magnolia State or just a fan of the sweet soul sound that the Malaco label has been providing since the 1960s, Bootleg Whiskey is a must have album. The release of Bootleg Whiskey is September 2nd, 2014.