The Language of the Blues: MAXWELL STREET MARKET 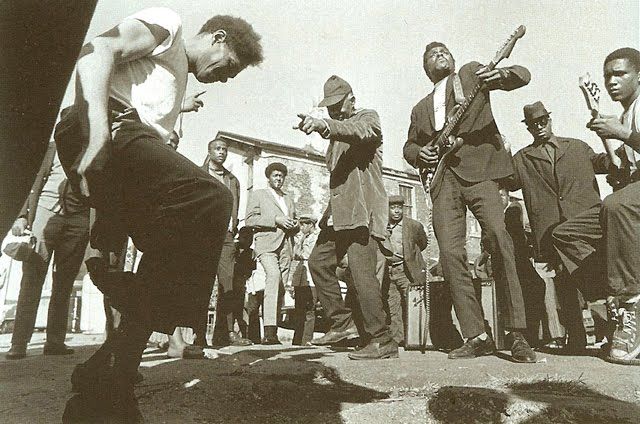 Maxwell Street Market was the Chicago neighborhood where blues musicians busked on the street from the 1940s until it was leveled in 1996 to make way for University of Chicago athletic fields and parking.

“It was an adventure!” Chicago blues guitarist Jody Williams told The Language of the Blues. “Me and Bo Diddley played on street corners all around town–South side, West side. Put a hat down there or open up the guitar case and they’d throw money into the hat or the case. You’d be surprised how much money you can make out there just being a street musician. I was out there when I was about fourteen, fifteen. I left home at seventeen; called myself a professional.”

Williams made good on that claim, joining the Howlin’ Wolf band in 1954 and later Memphis Slim’s band. He was an in-demand session player for Chess Records in the 1950s and 1960s. After a long break from the music biz, Jody returned to the blues in 2002 with a great new album Return of a Legend .

On the South and West sides, “depending on the neighborhood, mainly it was mostly black folks,” Williams recalled, “but in the Maxwell Street area, what they called Jewtown, it was a mix of everybody. It’s no longer there, they moved the market sales to another street but they still call it Maxwell Street. It was a huge bazaar, like you might see in foreign countries.”

Although pianist Henry Gray began playing juke joints near his family’s farm in Alsen, Louisiana, when he was sixteen, he really wanted to get up to Chicago to the thriving Maxwell Street scene.

“I was twenty-one when I moved to Chicago,” Gray said. “After I got out the army in ’46, I did go home to Louisiana, but I didn’t stay for but two weeks then went on back to Chicago. That’s where all the blues and all the musicians was, in Chicago, so that’s where I wanted to be.

“I played on Maxwell Street with Little Walter. A whole lotta stuff used to be going on there, right on the streets. I played down there lots of times. I’d bring an electric piano–I had three or four of ’em. Everybody was down there and I played with them all. Little Walter, Homesick James, Elmore James, James Cotton.”

Gray graduated to the clubs when he began playing with Muddy Waters in 1947. The pianist joined Howlin’ Wolf’s band in 1956 and stayed with him until 1968.

To learn lots more, pick up a copy of The Language of the Blues today!