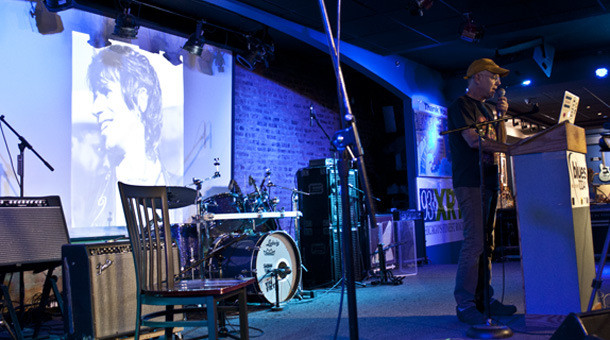 The second annual Blues Today symposium will be held at Buddy Guy’s Legends this Thursday, June 11th. This free event is open to the public. There will be four talks about the blues community, touching on a range of issues. If you can’t make it to the club, the whole event will be streamed online at BuddyGuy.TV. The event is sponsored by Buddy Guy’s Legends, American Blues Scene, and OnePatient Global Health Initiative.

This year’s speakers include:

During his 20-year career, Dr. Daniel Ivankovich (aka Chicago Slim) has focused on providing state-of-the-art spine, joint and fracture care to Chicagoans from all walks of life. He’s overseen 100,000+ patient visits and performed over ten thousand surgical procedures while helping expand health care services in some of the poorest and most underserved communities in America. Dan’s musical career began as disciple to many of his musical heroes on Chicago’s South Side. He studied, performed, and recorded with Chicago legends, Eddie Taylor, Homesick James, Lefty Dizz, Magic Slim, Junior Wells & Bo Diddley, including a stint as bandleader for legendary bluesman, Otis Rush. An award-winning physician that’s part bluesman, healer, philosopher & shaman, and, as Rock & Roll Hall-Of-Famer Bo Diddley said about Ivankovich, “He ain’t from this planet.”

Nancy Burlingame is a nurse who was Michael Coleman’s girlfriend and caregiver for the last several years of his life. She will be remembering Michael Coleman’s life and legacy, and talking about the challenges he faced in his final years; video will be played of Michael’s final performance at Buddy Guy’s.

Matt Hendricks: Three Forgotten GreatsBluesToday
Acoustic blues guitarist Matt Hendricks dives into the history of the blues, talking about some important musicians who have been largely forgotten: Big Bill Broonzy, Tampa Red, and Lonnie Johnson. He will discuss the men and their musical contributions and play some of their songs.

Larry White: Buddy Guy and Stevie Ray Vaughan
Larry White is an amateur videographer who has been the sales director for a machine service center in Orland Park for almost twenty years. He has known Buddy since around 1984, when he and his girlfriend would come to the Checkerboard and then the former Legends to see Buddy and a slew of other great blues artist perform their magic. He will talk about his experience filming Buddy and Stevie Ray Vaughan on July 30, 1989, and will present some never-before-released video footage from that night.