Jaimoe and the Band Wax Poetic About Jaimoe's Jasssz Band 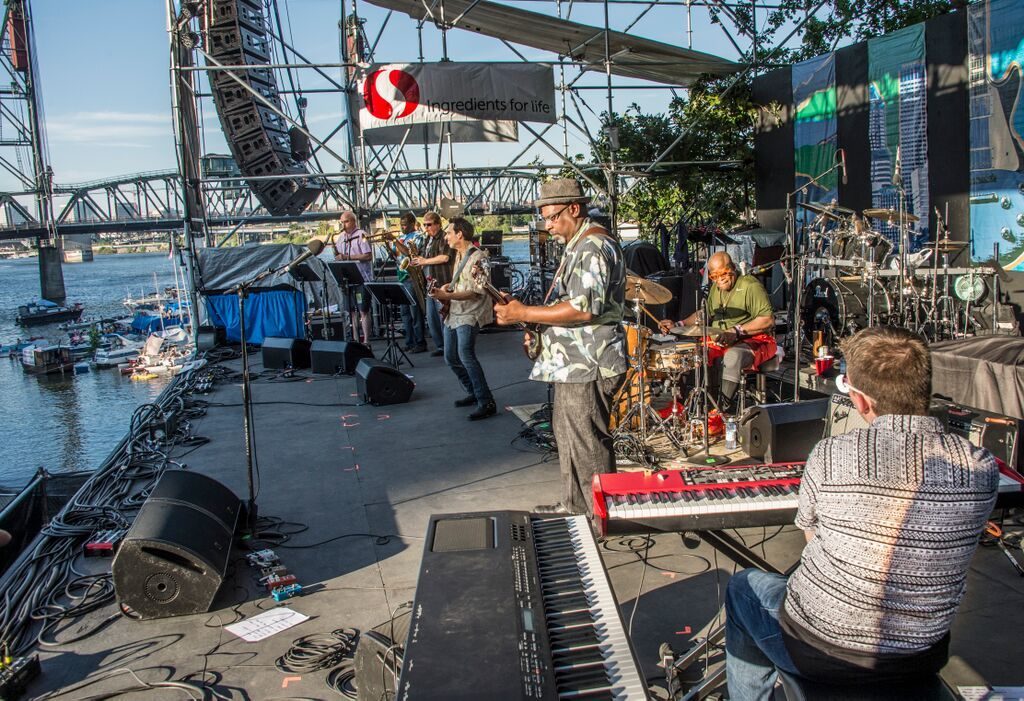 “God just brought us together,” says Jaimoe of his seven-member band, a group of artists from vastly different backgrounds that form a perfect whole. American Blues Scene sat down for an interview with the entire line-up in Portland, Oregon, where Jaimoe’s Jasssz Band was on the bill for the Waterfront Blues Festival in July.

Bassist Dave Stoltz, also of the Dickey Betts Band, attributes chemistry for the sublime sound they make. Remembering the time first time he sat in with Jaimoe some 25 years before, Dave says, “I’ll never forget it. It was 1, 2, 3, 4, and the first measure we started playing together was unbelievable revelation. We made a sound together; I was in love. I’d never played with a drummer that I felt that way with before. It was incredible, and it was so easy.”

Of course the musician Dave raves about is none other than Jai Johanny Johanson, the beloved original drummer and founding member of the Allman Brothers Band. His current band has afforded Jaimoe the opportunity to pursue jazz, his first musical love. When Reggie Pittman, the trumpet player, refers to Jaimoe as the band leader, Jaimoe denies any such thing. “I’m the drummer,” he says. Then why is it his name in the title? “It was the only way not to get fired by a band,” he exclaims. “It’s a joke and it’s a fact!”

Jaimoe is incredibly humble about his storied past. When he says, “I guess I played with some people in theatres,” he is talking about the grand old black venues such as the Apollo in Harlem and the Regal in Chicago. The “some people” he means include Otis Redding, Patti Labelle and the Bluebells, and Sam and Dave. “I had so much fun playing behind all those people.”

Born on July 8, 1944, in Gulfport, Mississippi, a career in music was not on Jaimoe’s radar until a jazz festival in 1959 which featured luminaries such as Louis Armstrong and Benny Goodman. “It just clicked,” he remembers. He began to play music at age 16 and wanted to play every instrument in the band room but decided to go with the drums. He never had formal lessons, a stark contrast to some of his band members.

Pianist Billy Test has dual degrees in both Jazz and Classical Piano Performance. Paul Lieberman, who serves as the band’s music director and plays flute, piccolo, and sax, has a Master of Music in Jazz Composition and Arranging. Kris Jensen has a Bachelor’s in African American music and teaches jazz performance at The Bushnell Center for the Performing Arts.

Not a one of these fellows looks down his nose at Jaimoe. Reggie describes the situation eloquently. “A lot of us have degrees – I have a Master’s [in Music Technology] from NYU – but the school doesn’t really teach you how to play. I think we all learned how to play by being around musicians. I went out on the weekends, and I had to unlearn what they were teaching me in school,” Reggie says, which sparks laughter from the others.

“The guys who were actually playing wouldn’t let me play. They kept saying, ‘What’s that?’ ‘Well that’s what they showed me.’ ‘Oh no, man, you can’t play it like that.’ ‘We going to show you how to really do it.’ So, a lot of us teach, and we teach as musicians, not as educators. Musicians know how to play music; teachers know how to teach. Jaimoe’s an example,” Reggie continues. “He’s played with everybody, but he really doesn’t say much about it. He knows how to play every style probably better than all of us.”

The gorgeous vocals and lyrical guitar are provided by Junior Mack, another self-taught musician who is also with the Grammy and Living Blues Award nominated Heritage Blues Orchestra. As Jaimoe says, “He’s the only one qualified.”

Reggie sums up why these seven people create such a magnificent vibe. “We all are professional musicians, and we all do bring unique energy into the band as well as musicality. The chemistry that Jaimoe brought together makes a unique sound.”