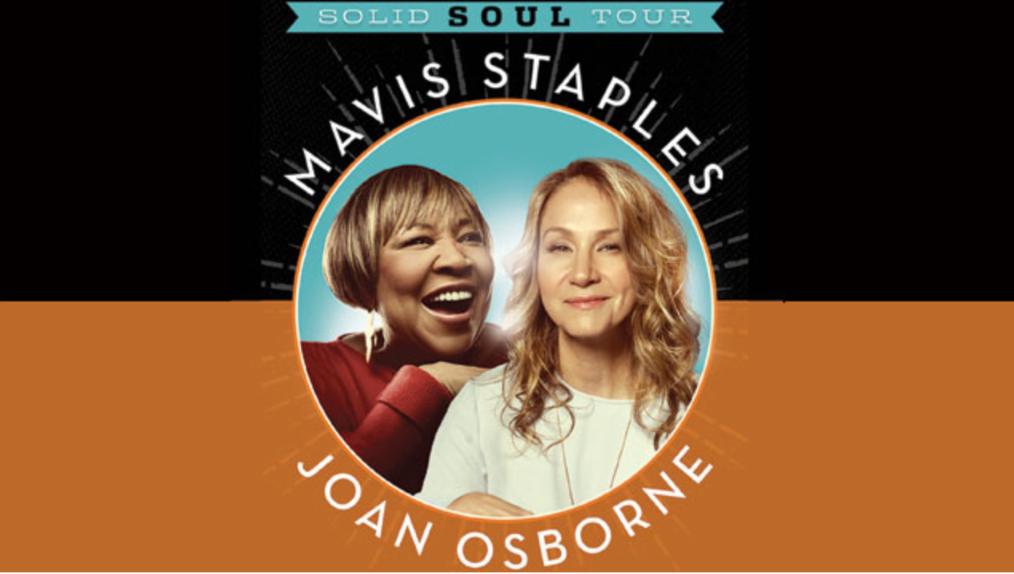 Joan Osborne chuckles when I tell her that’s it’s brave to begin her 34-date Solid Soul Tour with Mavis Staples at such an iconic venue as the Fillmore in San Francisco on Friday (September 25). “We did not actually arrange which shows were going to take place in which venues, but I think that that’s great. I think that it’s starting off with a bang at the Fillmore, and what a place to have our first show. I think it’s perfect.”

Joan is a 53-year-old white woman born in Anchorage, a fashionable suburb of Louisville, Kentucky, who studied theater at the University of Louisville, attended NYU Film School until the scholarship money ran out, and then got bitten by the blues bug woodshedding with the Holmes Brothers in a Manhattan nightclub in the late ’80s.

Mavis Staples is a 76-year-old African American woman born in Chicago, the oldest of four children born to Pops Staples who worked at the infamous Dockery’s Farm cotton plantation in Drew, Mississippi and learned guitar from Charley Patton in 1936. Mavis’ mother died early, and Mavis grew up on her grandmother’s farm in Mound Bayou, Mississippi. Her first hit was at 18 as lead singer in her father’s Staple Singers Quartet in 1957with “Uncloudy Day” on the VeeJay label, home to Jimmy Reed, Memphis Slim and John Lee Hooker.

To say that Joan Osborne is pleased to be co-headlining with one of her strongest influences would be a gross understatement. “She’s somebody I’ve admired and wanted to emulate for a long, long time.”

What both artists share is perhaps the single most important characteristic of a great blues singer, an ability to not only make you believe they have lived the lyrics of whatever song they’re singing, but that they are singing it for the first time.

And they’re singing it just for you.

And their passion in doing that is a matter of life affirming importance.

“You can probably say that part of her influence on me,” says Osborne of Mavis Staples, “is to know that whenever you are at that moment (when) you’re on stage that it’s your job to reach out to whoever is there and to connect with them because you just never know what’s going to happen next, and seize the moment.”

Joan Osborne first connected for this reporter in the early ’90s when she recorded a steamy version of Sonny Boy Williamson’s “Help Me” for her private label Womanly Hips. She re-recorded it for her million-selling Relish album in 1995, and she reprised another Sonny Boy song as the title cut of her 2012 Bring It On Home CD. Other classic cuts on that CD include “I Want to Be Loved” by Willie Dixon, Bill Withers’ “Same Love That Made Me Laugh,” and Slim Harpo’s “Shake Your Hips.” That CD will play a strong part in her half of the show with Mavis.

“I’ll certainly do something from (my 2014 CD) Love & Hate because it’s the most recent thing and ’cause I still love playing those songs, but I’m also going to go back and do some things that are maybe more from the Bring It On Home record, and some things from earlier in my career. There’s one song called “Light of This World.” I think it’s from the Little Wild One record. I think it’s gonna be perfect in this show because it’s like a gospel song. So, I’m going to be picking form a lot of different eras.

Mavis Staples was the voice of the Staples Singers at a time when African American artists like Sam Cooke were couching their self-affirming political songs in code because of the horrendous atrocities of the Civil Rights struggle of the early ’60s. The Staple Singers had a powerful influence in changing the general public’s view of racial equality in the late 1950s hits like “Will The Circle Be Unbroken” and “This May Be the Last Time” later adapted by the Stones.

They connected in a 1963 meeting with Martin Luther King at a Montgomery, Alabama concert and under his encouragement wrote and released civil rights anthems like “March Up Freedom’s Highway” about the 1965 Selma to Montgomery marches, “Washington We’re Watching You,” “It’s a Long Walk to D.C.” and “Why Am I Treated so Bad.” They became an even stronger voice in the civil right movement when “I’ll Take You There” topped the charts in 1971.

“They were having pop hits with songs like “Reach Out and Touch A Hand” and “Respect Yourself” and things that really reflected a very inclusive and a very sort of joyous vision of what the country could be and what our society could be, and they were songs that were political songs in that way. They were pop songs, but they also had political engine in them because they were expressing this view of what society can be and of how we could connect with each other despite our history of not doing that. So in that sense you can look at them as being political artists even in that era when they were having all these pop hits.”

Watching Mavis Staples’ solo career for me has been like observing a finely turned sports car run through the gears. For years after her father’s death in 2000, she stayed in first gear making few dents on the charts, but her performances at blues festivals pushed the throttle and have always been nothing short of transcendent. Her guitarist Rick Holmstrom is as good or better than any electric blues guitarist out there, having toured and recorded with William Clarke, Johnny Dyer, Rod Piazza, R. L. Burnside, Jimmy Rogers, Jody Williams, and Billy Boy Arnold. It’s this band that will back both Mavis and Joan on this tour.

Mavis has slammed it into fifth gear this year which is far and away her biggest year since she went solo. In January, she became the second Woody Guthrie Prize recipient. The first was Pete Seeger who in 2014 won a “prize given annually to the artists who best exemplifies the spirit and life work of Woody Guthrie by speaking for the less fortunate through music, film, literature, dance or other art forms and serving as a positive force for social change in America.”

Also this year Sony Legacy released Don’t Lose This, the final studio sessions of Pop Staples and Freedom Highway Complete recorded live in 1965 in celebration of the civil rights marches from Montgomery to Selma, Alabama. In April Mavis put out Your Good Fortune, 4-track EP made with Anti label mate Son Little including “See That My Grave Is Kept Clean” which was recorded by the Staple Singers as “Dying Man’s Plea” in 1962 as the B side to their cover of Dylan’s “Blowin’ in the Wind,” becoming the first black artists to cover Dylan. Your Good Fortune is produced by young soul man Son Little who wrote two of the songs for her and is quoted as saying, “Standing in the studio, holding her hand, I watched as each time she began a take. Everyone in the room jumped when we heard her voice – chills, a metaphysical experience every time.”

The Solid Soul tour with Joan Osborne is her second of the year. This summer she was out with Patti Griffin on the “Sweet Soul Tour.”

“I think after her father died, she was out of the public eye for a long time,” says Osborne, “and I think maybe lost her sense of why she needed to be in music, but she’s come back to us, and she’s come back not as an oldie act, but as this artist who still has a lot of life and at this point in her career is still making amazing records and beautiful recordings and original material and new songs. She’s having people write for her, and she’s still a very vibrant artist at this point in her life. Beyond the point when most people would have retired and gone home or been rehashing something they did 30 or 40 years ago, she’s doing something new.

“So that’s a real inspiration as well to look at somebody who has that kind of an arc of a career, and then you just look at who she is as a person and I’ve said this before. She has this incredible warmth and this incredible radiance, and this sense of just welcoming everyone to her music and to her and to what she does. She’s not excluding anyone, and this is about opening up music to all around, and it’s about loving each other.

“So at bottom I think that’s what all of us are trying to do in our lives, and music of course is about that. It’s just expression of love and openness to other human beings, and I think she’s somebody you can look at and see that very plainly. I’ve seen her many, many times in performance, and that’s the thing I always take away is just she’s this incredibly loving presence, this great presence, and it’s a joyful thing. So to be able to be around that for these next few months is just such a gift, and I’m just so grateful.”

Each show will end with a finale of Joan and Mavis performing The Band’s “The Weight” and other songs that hadn’t been worked out as of our interview four days before the tour began. “We’ve been talking about a few things. I’m at Mavis’ service in the regard. Whatever she wants to do, whatever she wants.”