Mick Kolassa's "Ghosts of the Riverside Hotel" Celebrates the Blues 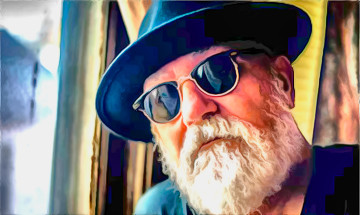 It can be said that when an artists issues an album, they are sharing themselves with their audience. It is as if they are saying, “Here’s what I’m thinking and feeling.” Mick Kolassa loves to share the blues. For him, sharing the blues is akin to sharing a good meal with friends at his home, or a good story over a cup of coffee by the fireplace. For Kolassa, it’s as much about the joy that comes from celebrating and sharing the music, as it is about the music itself.

Ghosts of the Riverside Hotel, Kolassa’s latest release on Swingsuit Records, contains 12 tracks and runs just over 50 minutes. Kolassa says of this new work, “I called this album “Ghosts of the Riverside Hotel” because the spirits of those who passed through those doors are still there, they can be felt. Those blues greats have made my life so much better through their music, and I hope to honor them with this record.” Some of those blues greats included Bessie Smith, who died in Room #2 of this building in 1937 while it was a hospital. Other residents included John Lee Hooker, Robert Nighthawk, Ike Turner, Howlin’ Wolf, Sam Cooke, and Sonny Boy Williamson II.

The best part of this celebration is the songs. Kolassa wrote eight of the twelve tracks here, and it is obvious he enjoyed doing so. The album opens with a unique take on the Hank Williams classic, “Ramblin’ Man,” and straight away we know we are going to enjoy this ride. Musicianship is first class throughout, with the mix, sound, and production providing clarity and depth.

Kolassa gives us a brilliant ’40s style performance of “One Meatball” as a homage to a Josh White delivery of the song. Victor Wainwright on the ivories, and Reba Russell on backing vocals lift the song up perfectly. “I Always Meant to Love You” has a suave, West Coast supper club swinging vibe to it. “Trouble,” written by Todd Snider, is deceptively simple but profoundly realized tune-smithing, delivered just so. “Nothin’ Left to Lose (Robin’s Blues)” is a luxuriously laid back, and thoughtfully deep look at understanding suicide as a solution that Robin Williams’ mind saw as the only way out. The vocal by Kolassa, along with the sax work of Kirk Smothers give the song a haunting quality that lingers.

Kolassa’s bluesy rendering of Randy Newman’s “Mama Told Me Not to Come” has a West Side Soul flair about it that works well. We especially enjoyed “Whiskey Woman,” on a number of levels. The guitars all playing off of one another, the organ work, with its almost church like feel; the thumping baseline by Logan Layman, and the playful backing vocals a lá Annika Chambers, Tracey K Masteler, and Layman all bring together a satisfying sonic work of art. “Mama Got a Mojo” is moody, bluesy, and beautifully played.

Ghosts of the Riverside Hotel is a sonic feast, full of delightful surprises. The bottom line? This is blues that’s well written, deftly performed, and dripping with character. We definitely recommend this to our friends, and yours too! Check it out soon.