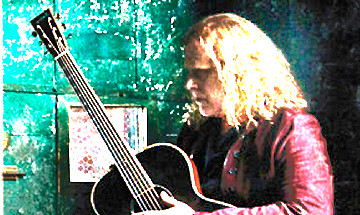 Warren Haynes has become an institution over the course of the past 15 years, and rightfully so. So often, he is like Savoir-Faire; he is everywhere. He played with the Allman Brothers Band from 1989 through 1997 and 2000 through 2014. He founded his own successful band, Gov’t Mule, with Matt Abts and Allen Woody (who passed in 2000). Each year he performs with friends at his Benefit Concerts, helping to support the work of Habitat for Humanity. There’s been work with other artists such as The Dave Matthews Band and The Grateful Dead, as well as TV performances including Front & Center, with his latest backing band, Railroad Earth.

Not one for standing still, Haynes is a consummate musician who is always growing and evolving. Having received the Lifetime Achievement Grammy Award in 2012, he continues to push the boundaries of his musical vision as witnessed by his newest project, Ashes & Dust with Railroad Earth.

Ashes & Dust, issued on the Concord Music Group label contains 13 glorious tracks and runs just over one hour. (The Deluxe Edition issue contains an additional five bonus tracks, four of which are demos.) The album is more Americana than blues, and it is enthralling. The song craft here is striking, and the music itself is ethereal. The engineering, mix, and sound quality is pristine, giving the music a vivid clarity. Haynes chose wisely when he recruited Railroad Earth to collaborate with him on this project. Special guests include Grace Potter, and fellow Grammy Award winner Shawn Colvin.

We found this album completely mesmerizing, and enjoyed it immensely. As usual, we did have our favorite tracks. “Is It Me Or You” is a tasty acoustic stew, flavored with violin, slide, and spicy electric fills. “Coal Tattoo” hearkened back to the brilliant work of Marshall Tucker, while “Company Man” tells the moving story of Haynes’ father, peppered with choice violin & slide accents. “New Year’s Eve” features electric slide, a fine vocal, and gorgeous mandolin. “Glory Road” is an acoustic sea you just want to fall into. “Beat Down The Dust” is driven, intricate, acoustic honey we couldn’t get enough of.

The weaving of the instruments in and out of each other throughout the album is breathtakingly beautiful. The level of musicianship is jaw dropping. Haynes and company have delivered an acoustic feast that entertains, and lifts the spirit.

We highly recommend this album. Listeners will not be disappointed.